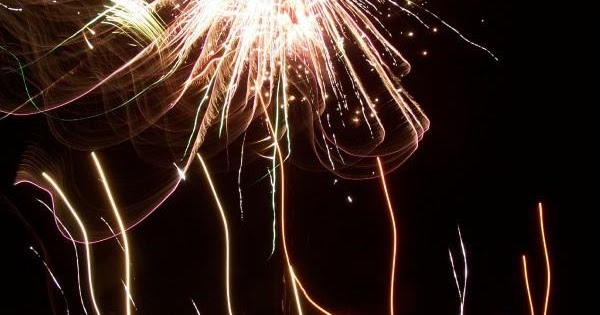 Today is the 4th of July. Before I get started on this post, I would just like to thank EVERY single one of the men and women who have died fighting to give me the glorious freedoms I have, including the one to write this blog. You guys and gals are heroes, and you deserve much more. Thank you.

It hasn’t rained in Oklahoma (this part) for about 2 or 3 weeks. Before that, we had nothing but rain for 2 or 3 weeks. It was depressing. However, it’s raining today. As I’m typing, I’m looking out my window, and watching the rain. I’m also watching the sparrows hit up my new bird feeder that I made, and also watching two gigantic doves try to muscle their way in on some food. I think the only reason the sparrows tolerate it, is because the doves are the same color. My point is, it had to rain today. If it rains out fireworks tonight, I’m gonna be wicked pissed.
The 4th of July runs deep in my family. We love it. My dad loved to spend money on fireworks, and he passed that love down to his 4 boys. Unfortunately, when you lose your job the week before, fireworks aren’t too high on your agenda. Normally we go to my moms house, and we talk her into giving us an absurd amount of money, and then we treat our family and neighbors to a show. The last couple of years, we’ve even gone to Arkansas to get bottle rockets, which are illegal here in Oklahoma. Why in the world they are illegal, I have no idea. Must be some fun haters in our legislature. “Snakes and sparklers, guys. That’s all.” Anyhow, I guess we’re doing the 4th at my aunt and uncles house this year, which is cool, because they have one of those 5 foot deep pools, and I’m fairly certain I can get my grandmother to get me some floaties.
Last year, however, we did it at moms house. Bottle rockets, M-80’s, sparkler bombs, the whole nine yards. It was so much fun. For nightime, we got a bunch of those cannon ball things. the ones you put in the tube, light the long fuse, and pray to God on high that the tube doesn’t tip over and send a flaming ball of patriocism directly into the lap of dear Memaw. Once again, my mother gave us a stupid amount of money, and we bought a crap ton of these things. We spent a good portion of the day just waiting for nightfall so we could do it up big.
As darkness settled upon us, and we started pullin out the leftover food and the homemade ice cream, my brothers and I started gettin stuff set up. Lawn chairs came out, and everyone assumed the neck back, head up position. And the show began! Everyone oooohing and aaaaahing. It was nice. The Liar and The Youngest set off the fireworks for the most part, with myself and The Groom doing the roman candles and the night time bottle rockets. Then they got stupid. It started with throwing the balls in the air, which is just dumb. Wait….wait….wait….wait…NOW! Anything that involves that kind of thinking is generally a bad idea. It moved on to putting balls that didn’t belong in certain tubes into those tubes so they could launch a bunch of them at once. My family is nothing if not show offs. This is where things went horribly wrong, horribly fast.
I have a cousin. His name is The Cryer. When The Cryer comes over, he cries. Inevitably, someone will make him cry about something. The fastest way is to tell him that OU sucks. Anyways, we often times bet on how long it will take him to start crying after he gets to the house. And I’m gonna admit it here, (Ang, if you read this, I’m sorry) sometimes we resort to some low measures for making him cry to win that bet. The thing is, what I’m tryin to say, he’s kind of a crybaby. Now that’s just keepin it real.
Back to our young firework engineers on that fateful night. They were keeping the box of balls and such right behind the table that they were shooting balls off of. This is a very intelligent thing to do, and a great time saver. For the most part, things were going good. Then they decided that they were gonna do two or three tubes apiece, and make six shots go off. I think they put multiple balls in the tube as well. Well, The Youngest can’t quite light things as fast as The Liar, and he kind of got in a hurry… He knocked over one of his tubes. The word “bail” doesn’t convey the speed in which they got outta there. They were gone. They didn’t really warn us that anything had gone wrong, but we made quite the informed guess when they were back up on the porch with us. And sure enough, it happened. One of those balls rolled right off the edge of the table and smooth into the box of other balls. This is what resulted. 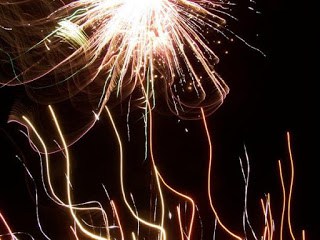 I’ve GOT to give The Missus credit for that picture. The rest of us were duckin and runnin for cover, and somehow she snapped that off. It looks like that was taking place in the sky, but for sure, that was about 4 feet off the ground. She’s a picture gettin soldier. I’m so proud of her. Anyways, one of these balls shoots straight for The Cryer. It doesn’t get anywhere near him, but that was enough. Everyone is kind of laughin and still screamin over it, and The Cryer gets MAD. He just started cryin and punchin people that were laughing! I have never seen a more emotional response over fireworks almost killing someone. Sure he’s like 10. But so what! Get that stuff together! Anyhow, they went through the box after a safe amount of time, and shot off what was left. But it’s really hard to appreciate fireworks when you’re locked in the house for safety.
I hope you all have a happy and safe 4th, and I’ll see you back on Monday morning.
I mentioned “balls” a lot in this post…