Being an Ex High School Athlete, it’s really hard for me to resist a challenge. I don’t know why this is, but anytime someone asks me if I wanna play something, or if I wanna do something that involves any kind of ball, (not that kind, douche) I’m down. So when The Missus asked me if I wanted to play baseball yesterday with her friend and her kids, I said yes, even though I had had some pretty severe intestinal issues all day.

The Missus’s friend, we’ll call her Marina, has 2 kids. One is an 8 year old, the other is 5. The kids are pretty well behaved, (usually), and are worth a lot of laughs. The 8 year old whooped my tail at guitar hero a while back, and I was still kinda lookin for some vengeance there. Get where this is going? I dress in shorts, flip flops and a t shirt without a support garment underneath, (aka another t shirt) and we head out.
About three quarters of the way out there, The Missus looks at me, and says, “Why didn’t you bring your glove?” “We’re playing REAL baseball?” I asked. “What did you think I meant?” “Well, I thought you meant we were gonna play on the Wii.” Guys and gals, I am so ashamed. I really had thought the whole time that we were gonna play their little baseball game on the Nintendo. I’m an idiot, right? Also, this speaks volumes of my laziness. I kind of told her to just turn around and go home, but she didn’t. Then I told her I wasn’t gonna play. I was in flip flops, for cryin in the mud. I was having INTESTINAL issues! Anyway, when we got there, I just put my trunks on, and jumped in their pool.
Lying there, floating on some little tube things, I see the 5 year old head my way. He proceeds to tell me how he was really hoping that I’d play, and how he liked it when I played games with him. He may have teared up a little. I explained to him, in 5 year old terms, that I wasn’t feeling good, and I didn’t have a glove or shoes. He left.
A couple minutes go by, and I see the 8 year old. He was tryna sneak up on me, and I called him out on it. This 8 year old is one of the most logical thinkers I know. Spock himself would have a hard time out thinking this child. I’m pretty sure that he’s smarter than me. Anyway, he walks out there, and he’s all sad, and he says that he guesses they aren’t gonna be able to play, because they don’t have enough players now. I point out that even with 6 players, you can’t really even have ONE team, much less two. He says, “Well, someone was gonna catch from the team that was batting, and that will let all the people on the other team play the field.” This made no sense to me. But I got out of the pool. I didn’t know who they’d send at me next, and I didn’t wanna find out.
For the record, 3 on 3 baseball is the lamest thing I’ve ever done. It was good for a lot of laughs, mainly because I was using a 26 inch bat, (that’s what he said) and a tee ball. The tee ball wound up being a good thing because it was soft, and I didn’t really need a glove. What do I do the first time I’m up at bat? I hit a line drive straight back at Marina and manage to put huge red marks on BOTH of her legs. I kind of felt bad, but not really. No mercy. I’ve taken the liberty of drawing up a sketch of the baseball field. 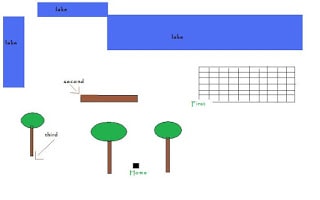 First was the corner of a metal fencepost. Second was the end of a long railroad tie, but I think you were safe if you were anywhere on the railroad tie. Third was a tree. Home was a spot between 2 trees that wasn’t really marked. That being so, you were safe as soon as you stepped off third. You’ll notice that our playing field ended in a lake. At one point, I told the 5 year old that I was hitting it in the lake and he was gonna have to go get it. He immediately started bawling. From there on out, I started callin him the 8 year old’s sister. I mean, come on. He had to know I wasn’t gonna throw him in a lake. Also, notice the almost trapezoidial shape of our field. I think this is how MLB should set up all their parks from here on out. The pitchers mound varied widely on who was batting. At one point, I had 57 strikes on the 5 year old, and he wasn’t out. Explain that.
Anyway, it was kind of fun, and I didn’t really hurt myself too bad in the flip flops. Got some exercise in, so that was good. Then we moved to the pool.
When I get in a pool with the 8 year old, I’m instantly turned into “that fat guy who can throw me far”. Thats all I get, the entire time. Throw me! Throw me! Please? Throw me! I always oblige, even though it kills my back. It’s kind of fun, even. It’s a way to get my guitar hero revenge… Well, we got in, and he almost immediately had to get out, because he got in some trouble. I had about 10 minutes of blissful swimmin time with The Missus, and then he got back in.
“Throw me! Throw me! Throw me!” It began instantly. So I threw him. I won’t say I was trying to hurt him, because that’s lame, but it’s always satisfying when they come up coughing and stay a pools length away from you the rest of the time. This didn’t happen. He swam back over. “Throw me again! Throw me again!” So I threw him again. 10 or 12 throws later, I was feeling it. I called it off, and swam a bit more. He got out of the pool and proceeded to try and hit me with pool noodles. So I launched out of the pool beached whale style to try and grab him, and when I slid back down into the pool, I scraped almost all the skin off under my gut. Talk about hurt. I thought I was bleeding. Turns out, it wasn’t as bad as I’d thought, but it still hurts this morning. I got out of the pool soon after, and headed home to bed.
My reward for all of the “fun”? I can’t move my back hardly at all this morning. I woke up to go use the restroom last night, and I looked like the got dang Hunchback of Notre Dame. It was pathetic. I’m staying in today, recovering from 3 on 3 baseball and swimming with an 8 year old.
If anyone has a Wii though, bring it over. I’ll walk two miles on that.