Blogging Material Usually Starts When Someone Gets Hit In The Nuts… 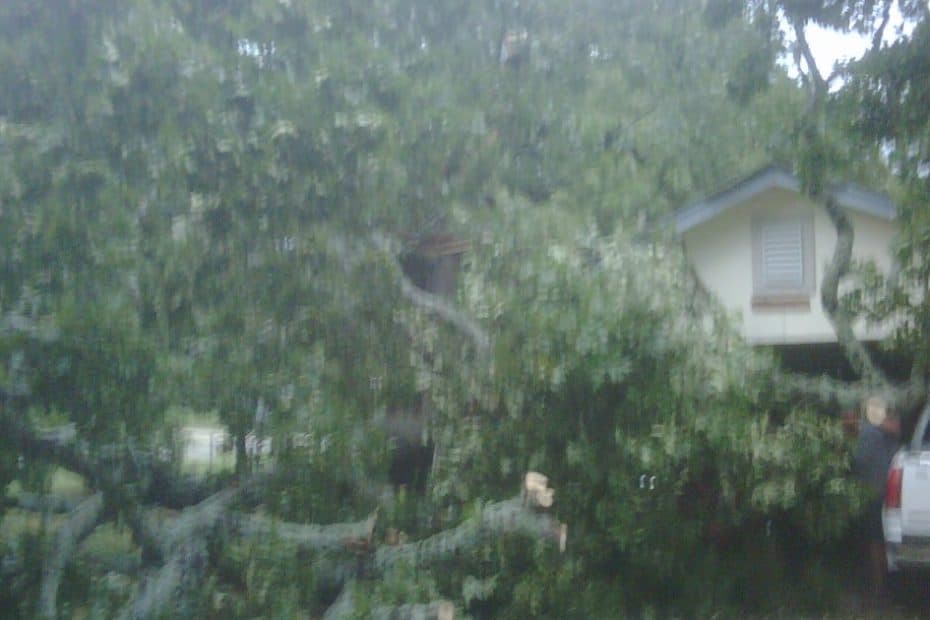 Well, I told you it would happen, and it did. Memoir Monday has been tabled in lieu of the tale I’m going to spin to you now.

We headed over to Marina’s place this evening to have a “Back 2 School” water balloon party. I’ll tip my hat to Marina, she had filled up a swimming pool full of water balloons. She was prepared. As we headed that way, Hurricane Wagoner hit. These wind gusts had to be in the 80’s and 90’s. They were STRONG. Rain blowing sideways, hail and lots of lightning. The party was ruined.
We got to Marina’s house, and the power was out. Everyone was pretty cranky, on account of the party not starting out with perfect weather. I was pretty hepped up, and I don’t know why. It stopped quickly. In my previous posts, you’ve read about Marina’s kids. The 8 and 4 year old. Hellions, both. I walked in the door, got to the living room, made a comment about how hepped up I was, and got smooth punched in the left teste by the 4 year old. POP! I dropped to my knees. I almost threw up… I hurt so bad. How can you make a 4 year old see that he’s crippled you?!?!? It’s not like I could just part his uprights, ya know?
I made it to the couch, and sat down for a while. We were gonna play monopoly, but we gave that up when the 8 year old made me drop all the money I had just sorted out. I told him I was gonna make him eat a bill, and he said that it would kill him, so I ate one to prove that it wouldn’t. Bad idea, folks. It came back and got me later.
After the storm blew past, we meandered outside and saw this: 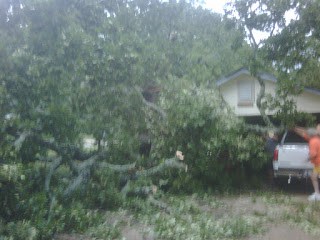 That’s a tree on a house. And on a vehicle. In other words, lame. The guy wasn’t mad about it at all, so we started helping him take down the tree and dragging it across the road. A couple of minutes later: 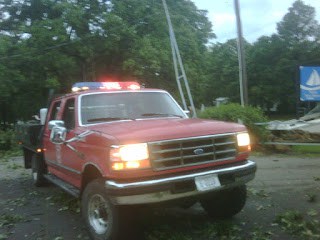 Oh yeah. That’s the fire department. Taylor Ferry’s finest. What brought them? The smoke from the grill on which we were cooking hamburgers. Yeah… No one said for certain if it was the smell of the smoke, or the sight. It could go either way, really. Since they were there, they teamed up for some chainsaw starting: 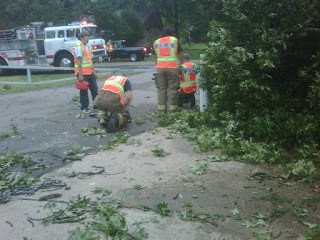 4 guys, 2 firetrucks and 2 chainsaws. Yup. you notice the person stopped behind the first firetruck? I had some fun with that… I’ll tell you later. With the chainsaws up and running, the work begins: 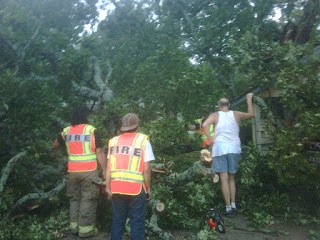 The guy in the classic Oklahoma wife beater is the guys who’s tree fell. The two FD guys, wearing the uniforms of Oklahoma firemen, are offering helpful suggestions. Such as, “You should cut here, Jim.” or “Hows about you cut right there, Steve?” Which sets up this little beauty right here: 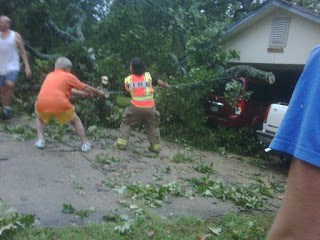 The epic battle of tug of war. Man vs tree. I am really proud to say that we won this one: 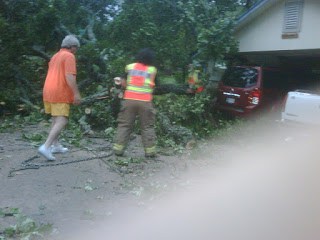 The guy in the orange, we’ll just call him EZ Mart, he showed up, and was determined to whip some tree ass. This is a picture of his most common pose during the ordeal: 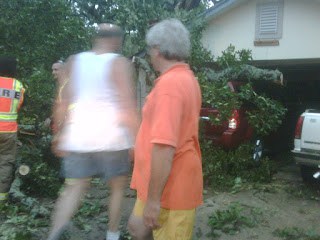 Beater guy is a little blurry in this pic, and you should be thankful. If you catch even a blurry shot of someone in a wife beater, you’ve accomplished something. The sexiness is almost too much for film. I’d venture to say that on any normal camera, he wouldn’t have even shown up in an action shot like this. The finished product? A very badly damaged red vehicle in the background, and a very damaged roof. Not good times. The greatest line of the night? It belongs to me.
Nosey Lady From Truck: What is going on?Me: They’ve got five calls, so they’re gonna head out.NLFT: What?!? Five calls? Where?!?Me: I don’t know… They said they had five calls……it doesn’t look good.
HA! You should have seen her eyes get big after that! It was the single greatest moment of the day. Priceless! Made even better by the fact that the FD was scurrying around like Cuba when we enter their airspace.
You’ll have to excuse me now… I’m gonna go ice my nuts.