The Day I Wound Up In The Water… And How I Deserved It. 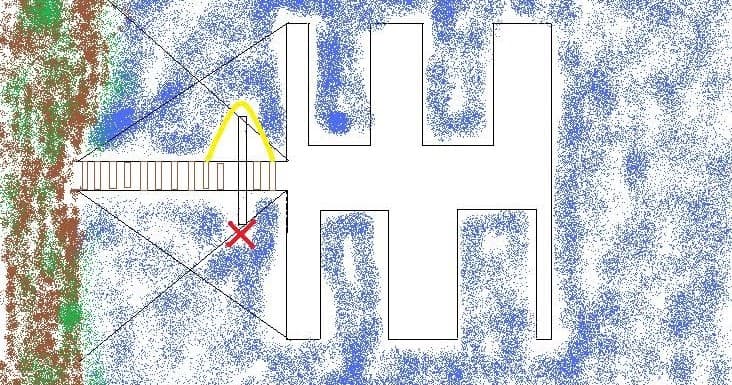 It was a cloudy, brisk spring day in April, and I had decided that I wanted to do some fishing. I called up Lane Metzger, and we met up to go down to a dock. I’ve taken the liberty of using MS Paint to draw you an overview. 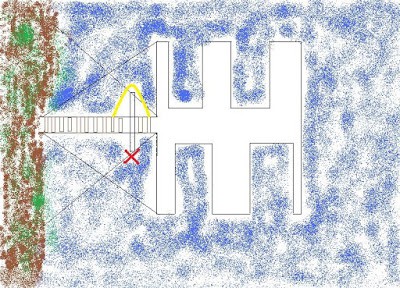 This is what this particular dock looked like in an aerial, badly drawn view. The brown stuff is land, the blue stuff is water. Don’t like my drawings? Lump it.
Lane and I ventured out onto the little walkway, and we started trying to catch some fish. We couldn’t really get a good cast into the dock, because of that little thing in the middle there. The thing with the “X” and the curvy yellow line by it. That is a locked gate, obvs to keep people like me from getting into docks and actually catching fish. Douchebags, right? I mean, they pay for the privilege to fish and park their boats there, but for sure, they could let me in? Nope.
We decided we were going around the gate.

Before I go into that, let me tell you what we were wearing. Winter clothes. I had on a pair of boots, jeans, a long sleeve shirt and under that a waffle shirt. Because it was COLD. It was still chilly, and the water, as I soon found out, was still very cold as well.

Lane is about 6’6″ and maybe weighs 8 pounds soaking wet. I exaggerate, but he’s skinny. The yellow loopy line represents what he did. He held on with one hand, did a swingy type thing like a stripper on a pole, and latched on the other side with his free hand. Easy peasy.
I got this.
Now, looking at the above graphic, you can see the red X. This stands for fail. I decided to go around the other side, because I’m right handed. That was literally my only reason for doing it. I thought that since I was right handed, I should be using my right hand to perform the back half of the maneuver.

I handed my cell phone and my wallet to Lane, which in hindsight was the only smart thing I did all day, and I gathered some courage. I stepped over the bar, and gathered more courage.

To give you an idea of what I was doing, stand up, open a door, and try to touch the walls on both sides of it. Some of you may be able to do this. Those of you who can may be 6’6″ and NOT have a gut in your way. So begins what is the slowest fall of my life.
I basically just started slipping into the water. Due to sheer determination, I slipped in increments.

Lane describes the sound I made going under as Blllllllllllllllllloop. I can’t confirm that, because I was busy drowning. That water was DEEP. And COLD.

I could not pull myself back up on the dock, because that takes upper body strength and not suffering from hypothermia. Also, I’m fat. I had to SWIM in all that clothing I had on, back up to the bank. I was wicked pissed, but I had to laugh, mainly because Lane couldn’t stop. Douche.

We went home so I could change clothes, then we went right back out snuck into another dock that didn’t present as much of a challenge. We didn’t catch anything though, and that was lame.
I deserved it, but from now on, I’ll take my justice hot, thanks.