White Trash White Water Rafting (And How They Almost Died). 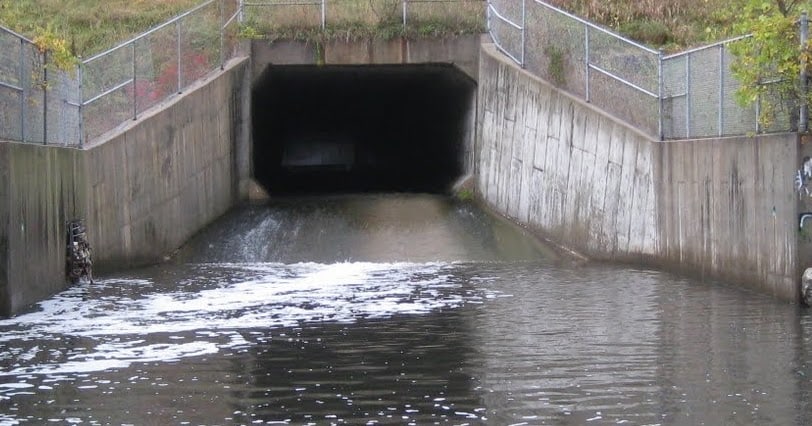 This story is not about me. It’s about The Groom, Kid Funk and The Grooms best friend, Dare. I’m not changing his name, because he is aptly named. You know that kid you had in your neighborhood growing up that would do ANYTHING you asked or dared him to do? That’s Dare. It’s not a surprise then, that each of them remember that it was Dares idea to start this whole thing.

It was a lazy Sunday afternoon, and it seems only fitting it was Halloween as well. It had been raining in our home town for some time. It caused a lot of flooding, and flooded a small creek that runs by Dare’s house.

Dare starts out, “I was trying to convince them that there was fun to be had, and that wasn’t a hard thing to do.”

It seems that there was a problem finding swim trunks for all of them, but they got suited up, and went outside. It was there that they spent some time sliding down a steep hill in the mud. Much like sledding, only without snow, and this was the sort of thing you imagine happening in a Mark Twain novel, and not in the 20th century.

Mere non-life threatening activities held no interest for our adventurous young lads though, and soon they started damming up a culvert so they could have a “pool” of sorts to slide into.

There is a restaurant called Martin’s that sits across the street from where they were doing this. The employees of the place had come outside, and they were taking bets on who would die first. It was here where Dare decided to get the canoe.

“It was that old piece of crap canoe that me and him had put on the pond for I don’t know how long, we’d put in the pond and it would fill up with water as we were canoeing around the pond.” said The Groom.
“There was a big crack in the canoe, and they wanted me to sit in it so the crack would stay out of the water,” says Kid FunkThe canoe was in bad shape, but they each got something to “steer/paddle” with. Dare grabbed a long piece of half inch PVC pipe so he could be the “gondolier,” The Groom grabbed a board (there are differing opinions, but all of them agreed about the size of a two by four), and Kid Funk got “a metal post from a chain link fence, with a little concrete on it.”
For those of you just now realizing whats about to happen, yes, they are going to take a defective canoe into a flooded, swift-moving creek that is actually a small watershed for a river. I was unable to get any good pictures, because the area is grown up with weeds and trees now, but the water was anywhere from 6 to 10 feet above normal, and looked like rapids you see in movies.

The Groom put it the most eloquently. “The creek was retarded high.”

Once in the current, it was agreed by all that they were going to navigate under the highway. “Go right! Go right!” screamed The Groom, then furiously started paddling left.

This is where things started going wrong. One of the rapids dipped them sharply, shot them into a current they wanted to avoid, and sped up their approach into the storm drain that runs under the highway. They went in the left section of the drain instead of the right, and there they ran into “300 spiders just all along the top of the drain.” Once again, they all three come to an agreement on the fact that at this point, it just got really quiet.

“There was no place to go,” says Dare. “Unless we just jumped out and swam, we weren’t going where we wanted to.”

They shot out from the drain, and things got quiet again. They took another sharp dip, and picked up even more speed. It was here that Dare tried heroically to steer with his trusty PVC pipe, but found out he couldn’t touch bottom with it. This leaves The Groom with his 2×4 to do all the steering (Kid Funk wisely got rid of his metal pole with concrete on it).

With The Groom paddling furiously, they go the next eighty feet in “twenty seconds.”

Enter “The Tree.” The Tree is a big factor in this story, because it almost killed them all. The Groom saw it first, and said “Piss!” as loud as he could, and in my interviews with them, all three used the words, “we braced for impact.”

The Groom, it seems, figured he could put one hand on the back of his board, and one hand on top, and hit the tree with it to slow them down.

When I asked all three of them what the most terrifying moment of the journey was, Kid Funk and The Groom both responded, “when we hit The Tree.” They smashed into the tree, and our hero The Groom had the board jammed back into his arm as he was flipped out of the canoe into the rushing water.

“The last thing I remember was hitting that tree,” said The Groom.

The canoe immediately sank, where to this day, it still hasn’t been found. This left Dare and Kid Funk grabbing at tree limbs and bushes to keep from being taken even further downstream, while The Groom bobbed to the surface a short distance away, looking as distressed as you would had you been flipped out of a canoe with a two by four.

“I gotta go after him!” screamed Dare to Kid Funk as he went chasing after The Groom.

Kid Funk decided to join the rescue effort as well, and he let go of his branch. He underestimated the speed of the water, and he overshot them. “I came up, and looked up, and they were twenty yards behind me. That’s how fast the water was going.” says Funk. “I was hanging by one hand, and I had the other hand on my trunks. I said that if they were going to find my drowned body, they were not gonna find me naked!”

He hitched up his trunks and fought his way back upstream to Dare and The Groom. At one point he said, “stay strong, little roots.” They then formed a human chain, and started swinging from broken branches to roots to tufts of grass until they got to a relatively calm pool of water.

It was here that The Groom said, “Oh. You can touch bottom here.”

Their ordeal was over. All three escaped with only minor scratches, and no one lost their dignity by losing their trunks.

When I asked them how fast they were going when they hit the tree that sent them under, I got these three different, but very similar responses.

“We were runnin’ at top speed,” said The Groom.

The best answer, of course, belonged to Dare. “You know on Star Wars where everything flies by them and they sit still? That’s the feeling I had.”

In closing my interviews with them, I asked all of them for a quote to sum up the experience. Here they are.
The Groom: “It was seriously the closest I’ve ever come to dying.”
Kid Funk: “After we came out of that tunnel, I made my peace with God.”
Dare: “I wish I could have gotten them to do it again. God knows I tried.”
When asked to vote on whether or not they would do it again in the exact same circumstances, they voted two to one for. Only Kid Funk said, “NO! I didn’t wanna do it then!”
Boredom in a small town can make you do crazy things. I’ve often used that very statement to explain the elevated teen pregnancy rates in rural areas. I mean, think about it. Would you rather have unprotected sex or go White Trash White Water Rafting?