The Magical Cup Of Tea. 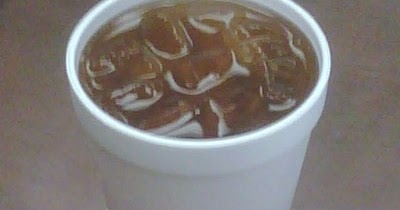 Todays lunch was a good one. Steak fingers, mashed taters, gravy and a hot roll. I’ve loved that lunch since I was knee high to the counter. So I cut in front of a bunch of kids to get my tray, and I headed for the salad bar. After scooping something that I don’t think can legally be called ranch dressing on my carrot sticks, I went to get my spork and leave.

It was then that I saw it.
Ever since I was a little kid, I have always wanted to get into the teachers tea. Every day, I had to get milk or juice in those gay cartons, and the teachers would fill up their Styrofoam cups with ice, then hold it under the spigot and get the nectar from the gods. It was idolized of course, because I couldn’t have it.
“NO!” I was told, over and over again. “That tea is for the teachers. Get some juice.” So it went, for 12 years of high school.

Enter today.
I spotted a teacher with a Styrofoam cup, and I heard once more the siren song of the metal dispenser. I walked as if in a trance over to the cooler and put ice in my cup, barely able to contain myself. I pressed the spigot.
Here it comes! The tea! And no one was telling me no! 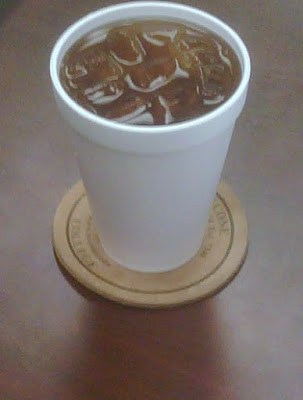 Alas, my cup o’ tea.
It was the greatest tea I’ve ever had. It was not sweetened, because as you may know, I have the diabetes.
It tasted like victory. Pure, unfiltered victory. I had the biggest smile on my face as I drank it. I don’t even remember the meal that I drank it with.
It takes a pretty picture as well, I think. I can’t indeed say for a fact that it was magical, but it sure was a mood lifter for a day that started out by me trying to fish a Welch’s grape drink packet out of the bottle of water I dropped it in. Red finger fail. (twss?)
I may get another glass tomorrow, and I may not. I spent the entire time getting it worried that I was going to hear “No! You’re not a real teacher, you’re an aide! Go get some juice!” So I don’t want to take the chance again, really. Also, it might ruin it for me.I want the magical tea to live forever in the halls of my memory, always being the glass of tea, that when drank, made me feel like I’d beaten every teacher that had ever told me no.
The moral of this story is this. We grow up fast. Although this story is somewhat exaggerated, that tea really did change my day. I’d wanted to drink that for so long, it could have been aged elephant piss in that dispenser, and I’d have been thrilled. Never give up on your dreams.
You never know when that Magical Tea might show back up in your life.