Memoir Monday: On Tuesday. (because I’m a rebel, and that’s how we roll) 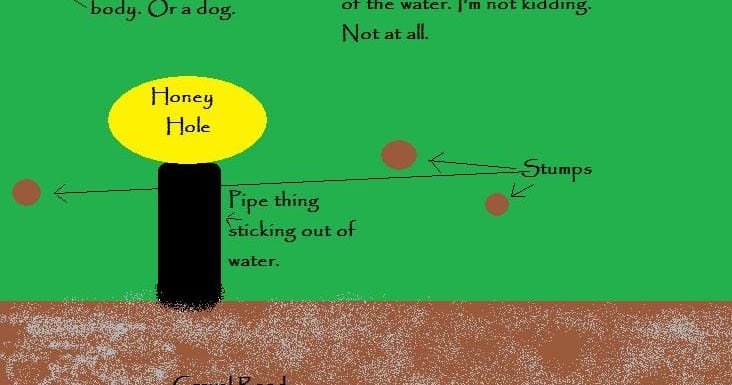 Yeah, yeah. I know it’s Tuesday. But I have a memoir, and I’m gonna write it.

One day, The Missus and I decided to go fishing. I invited Kid Funk, and he invited another gentleman, we’ll call him “Big Guy.” I’m calling him that, because he was, in fact, a big guy. Also hairy. Also maybe not the…ahem… most knowledgeable person in the world. I’m not calling him dumb. To give you an example, I’ll tell you about the first time I met Big Guy. I was sitting with The Groom at his girlfriends brothers house, and Big Guy walks in, looks at me, and says, “WHAT THE F*CK ARE YOU DOING HERE!?!?!?” And he walks right up to me like he’s gonna whoop my ass. We’ve been over the kind of pansy I am before. This guy was HUGE. Scared me to death. I almost pissed myself. He gets right up to me, cocks his fist, looks at me one more time, and says, “Oh, dude I thought you were someone else. Someone from Ft. Gibson.” I didn’t bother letting him know that at the time, I did kind of live in Ft. Gibson. It seemed maybe he wasn’t exactly fond of the person he thought I was. I let it go. I also changed my pants.

Anyway, that’s the back story of Big Guy. We got to be friends, he developed sort of a crush on The Missus, ( which I also let go) and he totally took me in a game of pitchin quarters one time.

BG and KF were roomies at the time, so they both decided to roll.  We went to a spot called Billy Creek, and yes, I’ve taken the liberty:

We liked to pull right up to that road, get out, and toss our lines into the honey hole. Now, this was easy to do, provided no one actually went out on the pipe. Then it made it hard to cast, and you couldn’t really catch fish. Oh, and by the way, there really was something dead wrapped up in a sheet. We never did check. I know this seems like a bad place to fish, but you could really tear up the crappie…sometimes. Mostly, it was a good spot to fish and drink, which there was none of on this particular trip. (there’s another story that involves Big Guy, about 20 beers, and a 12 gauge…)

So we get out there, get our poles out, and start not catching fish. This makes us antsy. KF and The Missus both are not capable of really just sitting still if the fish aren’t biting. They get restless. Well, The Missus decides to restless herself right out on the pipe. Now, we’d all agreed beforehand that we weren’t going to do this. But she did. This makes KF really mad. He asks why she’s out there, and to my knowledge, the conversation went something like this.

This resulted in two things. One was laughter. By everyone but Big Guy…..and The Missus. I couldn’t stop laughing. It was the funniest conversation I had ever heard, hands down. Nothing had even come close.

The other thing that happened was The Missus picking up KF’s keys, and throwing them in the water, then immediately turning around, getting in our vehicle, and driving off. OFF. O-F-F.

My ride had gone, and KF’s keys were somewhere in the water. This pretty much turned laughter into not laughter. The situation had ceased to be funny, if you can imagine. I really thought we were going to have to walk home.

After some digging, we found the keys, and we just kept fishing. I wasn’t about to deal with the situation, and I knew I was in trouble. About 30 minutes later, The Missus pulls back up, and I very sadly reeled in and went on my way. She was still wicked pissed, but mostly I just blamed KF for everything.

Thanks for taking one for the team, buddy.

This is also not the only time something like this has happened when I’ve been fishing with them. Those are other stories for other days. On the plus side, I’m feeling better, and I have a doozy of  a TMI story this week.

Anyways, I’m out. Gonna go watch a volleyball game, and maybe see more of that sportsmanship