Sushi Night With The Missus. Or Was It sASShimi? 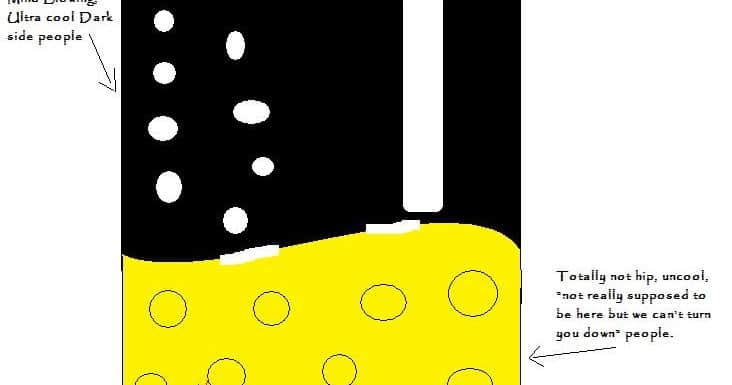 I went out with The Missus last night for some sushi and a general all around good time. My tummy was rumblin for some raw fish, and I figured if I took her out, I might get loved up later. I know, I’m a catch.

Turns out, I had one of the best nights out with her I’ve ever had. We have our moods, where we just kind of play off each other, and make each other laugh all night. Last night was one of them. Of course we had some help…

I decided that I wanted to try a sushi place called In The Raw. When you click that, music plays. I didn’t know that till just now, and it scared the shiz out of me. You’ve been warned.

As you can kind of tell, it’s a classier establishment. I have my classy moments, but if you’ve read anything else on here, you know I’m not the classy type. I had on a black shirt though, so I (almost) fit in.

We get there, walk in, and for sure, you can’t even really see where you are going. It’s that dark. Looking around, I soon realized that there were basically 2 sections. Unlighted, cool people places, and lit up, uncool people places. It’s like they put the uncool people under lights to display them. I’ve taken the liberty of drawing up a little bit what it looked like. 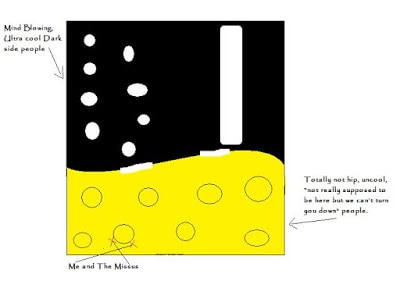 Yup. We got sat right in the uncool, walled off, lighted brighter than the Democratic reasoning for socialized healthcare side of the room.

The waitress was a bubbly, retarded sort, who talked me into an appetizer that “wasn’t on the menu, but OMG it is SO good.” Yeah… It cost me $10 and wasn’t even that great. However, the best was yet to come.

We ordered our rolls, and waited about 30 minutes for them to come out. The Missus doesn’t care much for sushi, but I heart it. She went out on a limb this time though, and ordered some! I was so proud of her! During our wait, we laughed and joked about some people in the restaurant that we thought we were cooler than, and then IT happened.

The guy sitting at the table directly caddy wampus (spellcheck is LIVID that I used that word) to us shifted in his seat, and his ass fell out of his pants.

Yup. That’s right, I was staring at an ass, right in my sushi picking up line of sight. I’ve taken the liberty. 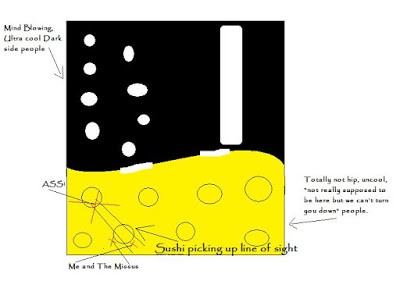 You see how this can be a problem?

I didn’t know what to do. Do I approach the guy? “Umm… Excuse me. I wore a belt tonight so people wouldn’t have to stare at my pathetic flat excuse for an ass. Could you do the same?”

Do I ask the waitress? “Umm… Excuse me. I couldn’t help but notice that the gentleman across the way is having a “pants malfunction.” Could you scurry across the way, forfeit any tip you might receive from them, and tell him about it?” I was actually about a second away from doing this, if for no other reason than to give you something funny to read, but I was threatened with divorce from The Missus if I did. Sorry readers, I’m too fat to start dating again. Plus…you know….the whole love thing.

Kid Funk says I should have thrown ice at it. Somehow, I don’t think that would have helped, but I considered it. I was at a loss. So I did what any normal blogger would do in this situation. I took a picture: 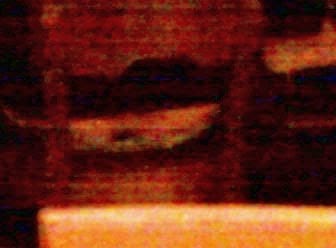 That’s right, if I had to stare at it eating sushi, you have to stare at it in my blog. Sorry folks. I’m also sorry the picture came out so lame. The Missus helped me photoshop it to get it looking as good as it did. I hope you enjoyed it as much as I did whilst trying to cram $50 dollars worth of sushi down my gullet so I could just please for the love of Moses LOOK UP!

I’m gonna include a bonus conversation with Kid Funk about it.

Me: Apparently, they put uncool people under lights here.
KF: Is there a big light right above your wife..?
Me: I don’t think that’s gonna win you any brownie points with my wife.
KF: Because she doesn’t have a sense of humor…
Me: She laughed.
KF: Tell management. “Listen, just ass crack. Right in my sushi picking up line of sight.”
Me: Damn good sushi, too. I need to see if he’s gonna pay my ticket for violatin my wifes eyes.
KF: Nah man, don’t get legal. That guy would have to register as a sex offender.