Ahem. What? (Oh. And Why Music Still Sucks.) 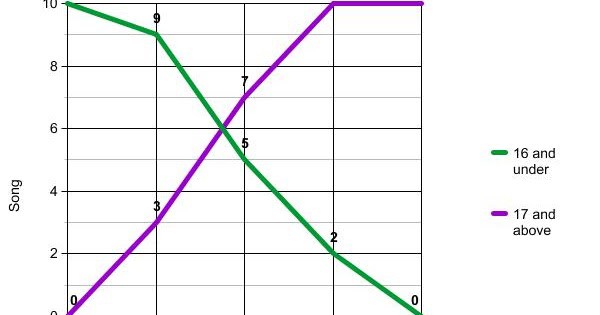 So I’m driving down the road the other day, and I am listening to some country music, because that’s what The Missus had on in the car, and lets be honest. Changing the radio station takes movement, unless you’ve got one of those new fancy jobs, and I just didn’t have it in me. (TWSS)

I’d just finished listening to Garth talk about being lonely, drinking some beers, and cheating on his wife with a 650 pound Trisha, (I would still totally do her) and I was looking forward to more wholesome country music, when I heard this:

Well, the plane touched down just about 3 o’clock
And the city’s still on my mind
Bikinis and palm trees danced in my head
I was still in the baggage line
Concrete and cars are their own prison bars like this life I’m living in
But the plane brought me farther.
I’m surrounded by water
And I’m not going back again

Yeah…
When did country music start being written by Snoop Doggy Da Dizzy Dizog? This song is by a band called The Zac Brown Band, and I’ve never heard of them, but I’m pretty sure it was produced by Death Row Records.
Once again, I’m going to break some things down for you. Because I am nothing if not family oriented and clean mouthed.
1. He says “ass” 4 times in this song. 4 TIMES! The last time I remember hearing the word ass in a country song, it was when Toby Keith took advantage of memorialized 9/11 by telling people we were gonna stick a boot up it. What happened then? Radio went bat shiz crazy. Said it “was just terrible.” I’m sorry, but iffen I have a 5 year old, the first radio lyrics I want him learning are NOT “I’m gonna put my ass in the sand.” And seriously guys, who really wants their ass in the sand? That gets sand in places you don’t want it. And sand is HOT.
2. He’s going to “roll a big fat one.” Sweet Conway Twitty. What did he just say? Roll a big fat one? As in weed??? Geez. Do we need this on the radio? How many times have we heard drug references bleeped out on hip hop or rock songs? ALL THE TIME. “But Zac Brown wants to roll a fat one? Hell yes! Let’s play it on the country stations! Bleep it out? What? This shit is WHOLESOME. Could be a homemade cigarette he wants to roll. Could be a cigar. Hell, it could be a crepe. We don’t know, he doesn’t say! Aww…shucks. It made us giggle, it’ll make America giggle too.”
3. He used the words “Big Poppa” in a country song. I’ve looked at the band, they’re white. The only time white people should ever be allowed to use the words big poppa is when they are alone in their cars singing the ACTUAL song “Big Poppa,” by the Notorious B.I.G. That’s real. And yes, the proper etiquette is to turn the volume down if you pass a black person. Just like in the movie Office Space.
4.  He uses French and Spanish words in the song. Those two languages mix well, don’t they? Let’s start mixing ALL things French and Mexican! We can have Spicy Chicken and Black Bean Crepes, or Snails in Mole Sauce. What about Poached Salmon Cevice? Yeah… That’ll hit the spot… Come on Zac, stick to the Ingles, eh? Plus, he totally doesn’t even say “Via Con Dios” right. Seriously. Listen to it.
5. Why the hell is he getting away from Georgia? What’s wrong with Georgia? Georgia frickin touches an ocean! I wish I was in Georgia right now. Peaches and shit, plus…Paula Frick Frackin Dean. If I’m in Georgia, I’m trackin her southern heiney down, and she’s gonna cook me some lunch. And dinner. And then, I’m gonna become a Mormon, convince The Missus and Paula to become Mormons, then marry both of them. Talk about the best of both worlds. But in all seriousness. Can’t the guy just roll up a fatty and watch a Baywatch episode and pretend he’s at the beach? Isn’t that how that works? I’ve never personally tried the drugs, so I don’t know. I say again, what’s wrong with Georgia? Come to Oklahoma. Put your ass in the sand here, and you’ll get tetanus cut from one of our many broken bottles. That’s real.
I kind of focus grouped this blog yesterday with some teenagers here at the school. The general opinion of this song amongst kids 16 and under? It’s the greatest thing since Miley Cyrus or The Jonas Brothers. Shiz has blown up, y’all. No one seems to care that the dude is promoted drug abuse and cussing like a sailor in what has long been regarded as “the music we can kind of let our kids listen to because it’s not THAT bad…” Well, I have news for you. It’s gotten that bad. No one is gang banging anyone yet, and that’s cool, but still. While I was focus grouping yesterday, I threw out names like Hank Williams, Kenny Rogers, and Tammy Winette. Nothing. Crickets. No idea. This prompted me to make this graph for y’all. Because I’m nothing if not graph minded. 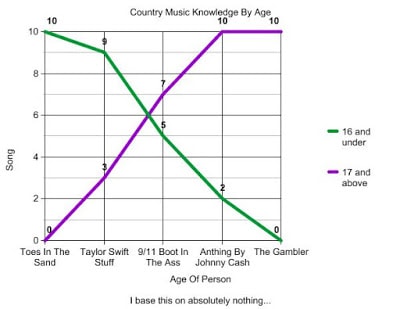 This is so sad…