Kind Of A Random Tuesday Thing… 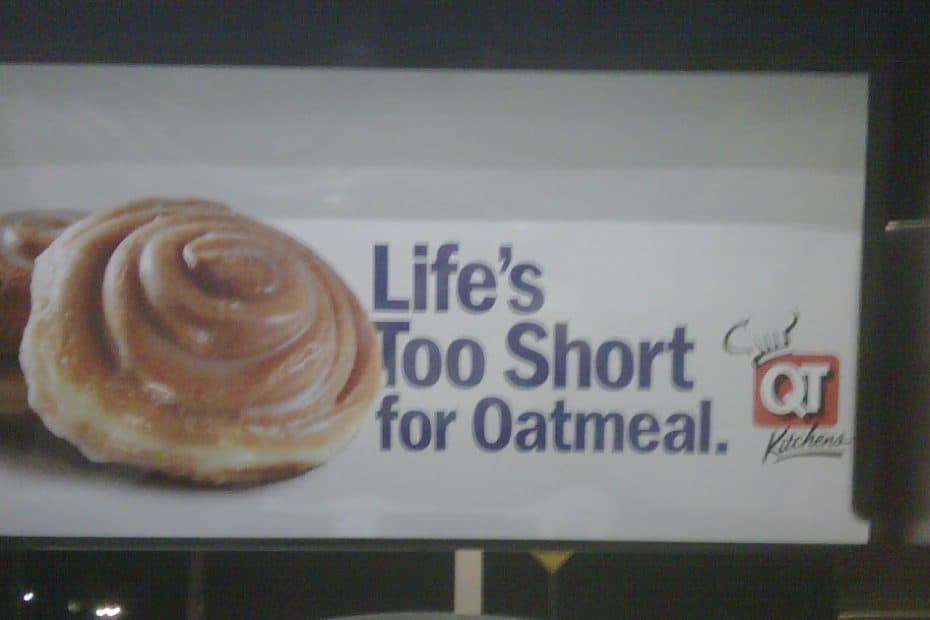 First off, I saw this commercial on Saturday, during the OU/Texas game.

Wow. That shiz is INTENSE. I actually caught myself moving to the edge of my seat during the commercial. Then that voice.

Yeah it did. Did you see that boy with the sucker?

“Daddy, that car came through the glass. How come I got in trouble for throwing my Hot Wheel through the neighbors window?”

“That Hot Wheel wasn’t a Mercedes, son. Plus, you made old man Johnson’s palsy flare up.”

Bravo, Mercedes. Bravo. It’s nice to know that even classy things can break up a party every once and a while, right? You have a friend that does it. You know you do. Just like that car. Everything is going nice and easy, hell, you might even have a sucker, then, BAM! In comes Frank, “Call me Frankie” Tool. Shiz is rude, and no one likes the entrance, but everyone wants to be Frankie.

This is something I saw at a Quik Trip here in Tulsa the other day. For those of you not familiar with QT, well, it’s God’s convenience store. That’s real. I don’t want to hear about how your local 7/11 is the best because one time they had spiced coffee and bear claws for 2 days before Christmas. QT is THE BEST. You need a lottery ticket, a pumpkin cappuccino, a pack of unfiltered Lucky Strikes and Horchata smoothie mixed with Rooster Booster and sweet milk at 4:30 in the morning? QT has it, baby. Hell, they’d probably sell you the winning ticket. However, this sign disturbed me: 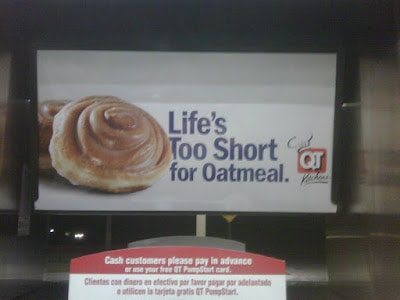 Us diabetics have a name for food like this. They’re called “Land Mines*.” That simply means that if you eat one of those every day, or even maybe just twice in your whole life, you’re gonna lose a leg. That’s real.

Life’s too short for what, now? Oatmeal? I think life will be too short if you DON’T have a little oatmeal every once and again. Geez.

Both of these things represent how far advertising has come to catch our attention. In both cases, it worked, right? I guess I should be saying, “Job well done, boys.” But to be honest, I can’t do it. Quik Trip? I lost a little respect for you. Even if you put some fine print at the bottom of the sign, it would have been better. Something like, [Quik Trip would like to point out that if you have one of these every day, you may develop a fat ass. You may also develop tits, a spare tire, and have certain difficulties seeing your own penis without the use of several mirrors. QT would like to remind you to have a bowl of oatmeal every once in a while. Seriously. Go have one now. Hell, we sell that shiz inside.]


See? I personally think that’s better. That’s just me though. I’m just one voice in a million, lost in the crowd of bloggers. Maybe one day, we’ll get a happy medium in advertising that will allow companies to speak the truth, AND sell their products well.

Now, if you’ll excuse me, I’m gonna go get some mirrors. I want to see my penis.

*I really just made that phrase up. I have consulted no other diabetics in the nicknaming of said product.