Memoir Monday: 8 Is WAY Too Young To Learn To Drive… 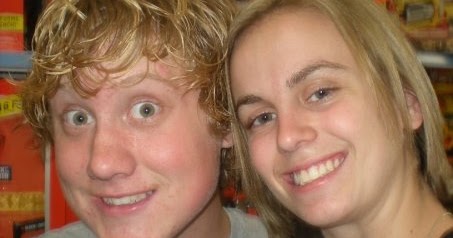 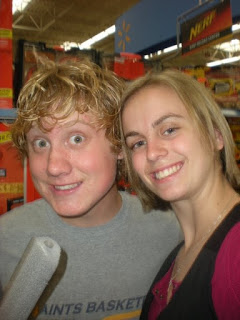 Meet Josh.
Actually, meet Josh and Katie, who sometimes leaves comments on my blog.
I just wanted you to have the appropriate image in your mind for this story.
Picture Josh at age 8. Curlier hair, less acne, same smile, and a heck of a lot cuter.
Now picture me at 18. Curlier hair, more acne, less wit, but a heck of a lot less fat, thus cuter.
I had a 1997 Ford Escort, “The Scort.” I had tricked it out with under carriage neon, three 10″ speakers in a custom Superman box, a fancy gearshift, and a license plate on the front with “Travy G” in Olde English style lettering. It was, and you can ask my ex-girlfriends about this, THE BALLS. Never got laid in it though. So lame.
One day I needed to change the oil in The Scort, and Josh was hangin around, being annoying and lookin cute and stuff.
The car was parked in the driveway, about a foot and a half from the concrete slab I needed it parked on.
I’m going to interrupt this story to talk about my bad decision track record.
I’ve dropped out of college, twice.
I quit a job I’d been on 2 years to sell vacuums.
I’ve eaten a hot sauce called “Mega Death,” several times.
The list could go on, but you get the general idea. I’ve made and I continue to make very bad decisions, almost on a daily basis. Every once in a great while, I will make a good decision, and the absolue shock of it will ultimately drive me to make a bad decsion. The one good decision I’ve made is stickin with The Missus, and yeah, in case you’re wondering, I manage to almost screw that up daily.
It’s a gift, really.
So when I got the idea in my head to let my 8 year old brother move my car a foot and a half onto a concrete slab, you probably already know that it was a bad one.
I didn’t. Heck, I thought it would be cute.
It was not.
I got him in the car, didn’t bother to buckle him, it’s only a foot and a half, right? Right. I tell him, “Listen. Start the car. Okay, now put your foot on the brake, and don’t take it off. Okay? You got that? DON’T TAKE YOUR FOOT OFF THE BRAKE. Okay. Now, put it in gear. That’s good. Now. VERY SLOWLY, take your foot off the brake. Okay.”
The car rolled forward about a foot, and stopped on the side of the concrete slab. The slab was raised off the ground about an inch.
The car wouldn’t move. It was stuck. And actually, just sitting here now, I don’t know why I didn’t just have him lightly press the brake, and me just push it over the hump. Things might have gone better…
Instead, I tell him to goose the gas peddle a bit. Just a bit, I say, just a bit.
He gooses it.
It was not just a bit.
He floored it. By floored it, I mean he wound that little four cylinder engine up to its max, and then applied all one hundred some odd horses to the tires, which then gripped the gravel, found purchase, and RAMPED up on the concrete slab, where we had a picnic table and…just on the other side, a swimming pool.
I’ve talked on here before about my reflexes.
Well, really, we can thank the picnic table for slowing the car down some. He pushed it all the way across the slab, scratching The Scort very badly.
I dove headfirst into the vehicle and applied the brakes in a hasty fashion, bringing The Scort to a halt and dang near sending The Youngest straight through the window, where I’m sure he would have landed in the swimming pool, all smiles. I say that, because once we got the car in gear and untangled him from the steering wheel, he looked up with that same smile you saw on top there and said…
“That was fun, Travis! Can we try again?”
I love my brothers.
Other “Taps On The Gas” Down Memory Lane: (GO READ THEM!)
Daffy’s Memoir Monday: Courage and Roll!
Lee’s Memoir Monday: I Drank The Koolaid.
Jeff’s Musical Memoir Monday!