What Is An Emo? 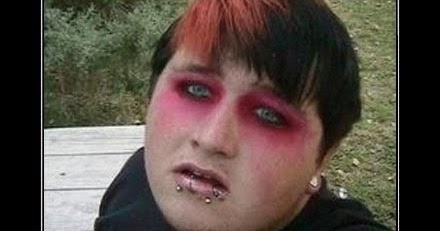 Some people in blogland don’t know what an “emo” person is. I figured I would take it upon myself give the best description of “emo” that I can. I’m going to do that, and attempt to be humorous at the same time. I fully expect to have a bunch of emo kids at my door with mascara and razor blades, lookin to cry a bit. Goes with the territory I guess. 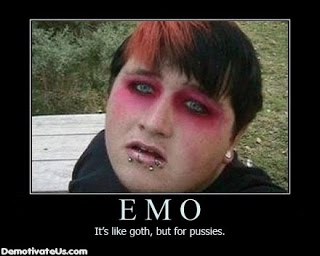 Sorry for the language on that.

I’m not gonna give you a Wiki definition here, folks.

Emo’s are pretty much gay. Makeup and shiz. Horrible music about pain and teenage angst and how hard it is to be alive in a world that won’t accept them for being sad all the time. Really, emo kids are one step removed from country music stars. The only real difference is, country music stars drink, and emo kids cut themselves.

They prefer to be individualistic, but only if they can do it in groups. “Do you wanna hang out this weekend and be non-conforming together? We’re all gonna be there. Do you have any makeup?”

The world is tougher for them than it is for you, because, well, they wear makeup, and they are sad. “I steal this makeup from my sister and that makes me sad. My parents should buy me makeup. But they don’t.”

They cut themselves because they like pain. But not too much pain, because that would be conformity. “I like to cut myself while I’m cutting myself. It just makes the pain in the pain that much more painful and sad. So it’s beautiful.”

Most of them are vegetarians, because that’s how they stick it to the man. “Oh yeah? You want me to eat meat? Well. I’ll just have a salad. F you, establishment.”

They use about 654 bottles of glue a year. For their hair. “Glue makes it do that thing. You know. That thing were it all looks shitty. Yeah.”

They all hate their parents. Parents are totally not cool, man. Parents are lame. Parents try to get them to use hair gel like normal kids instead of glue. Parents try to get them to listen to music wherein the lead vocals DON’T sound like a guy named Anthony getting nailed by some dude named Tiny in the prison shower. “I love that one part where the guys just screams for the entire song. It’s so beautiful. It really gets me in the mood to cut the initials of the girl I like into my upper thigh.”

The music has a name. Wanna know what it’s called? Screamo. Yeah…

They will almost never look into a camera directly. Fatty up there in the picture was most likely tricked by someone saying “Cheese” as they took the picture, and he thought there might be actual cheese, which isn’t meat, but it’s still dairy, and dairy is kind of just as bad because they make all those poor cows be conformists and do the same thing all the time and they won’t let them use glue on their hair, and that’s just wrong, so he was going to say something about how he hated cheese and was sad about it, but there wasn’t any cheese and the picture got snapped before he could look away again. Usually they are always looking down and away, as if they’ve just been touched by the gym teacher, and are being made to lie about it at the parent teacher conference. “We took school pictures the other day. I refused to look in the camera. They gave me detention. I cut myself in detention. It was beautiful.”

They like to hang out and skateboard. Why? Because skateboarding is the most inconvenient way of traveling known to man, besides those little scooter things they sold at Wal-Mart a while back. If it is difficult to do, emo’s will do it that way first. “You wanna go down to the mall and skateboard? It’ll really be a statement about how we don’t like cars or ourselves.”

Tight pants. Oh my word. Tight pants. These kids will wear pants so tight that in order to get them on, you need butter, two shoehorns, and a crane operator with at least 23 years of experience. It’s ridiculous, really. Like, they aren’t the sexy kind of tight pants. Not the kind of tight pants that you spend a good portion of your teenage years dreaming about. These are shapeless tight pants, that somehow have the ability to make even MY legs look like they are about the size of dowel rods. “Can I borrow your jeans? Yeah, the ones that look gay. Gay is okay, right? I mean, I’m totally not gay, but I like my pants to be. If they are tight enough, you can see my cutting scars.”

They will cry. It could be about anything. There is no reason at all for the crying. It could be because someone in Laos trapped a dolphin in a tuna net and then ate the dolphin instead of the tuna, or it could be because they got a vanilla milkshake instead of a chocolate milkshake at the food court while they were riding their skateboards. However, if the situation actually CALLS for crying, like say, the funeral of a lame parent, or a lame grandmother, they will not cry at all, because that’s conforming. “I lost my entire family in a car crash last week. Yeah, I didn’t cry at the funeral. That story about the dolphin is Laos really got me going though.”

Anyway, I hope this kind of clears things up for you. Like I said, this is MY definition of emo. It’s not an official definition, and if you don’t like it, well, come see me, and I’ll get you some razor blades, and we can cry about the fact that I don’t keep glue in the house.