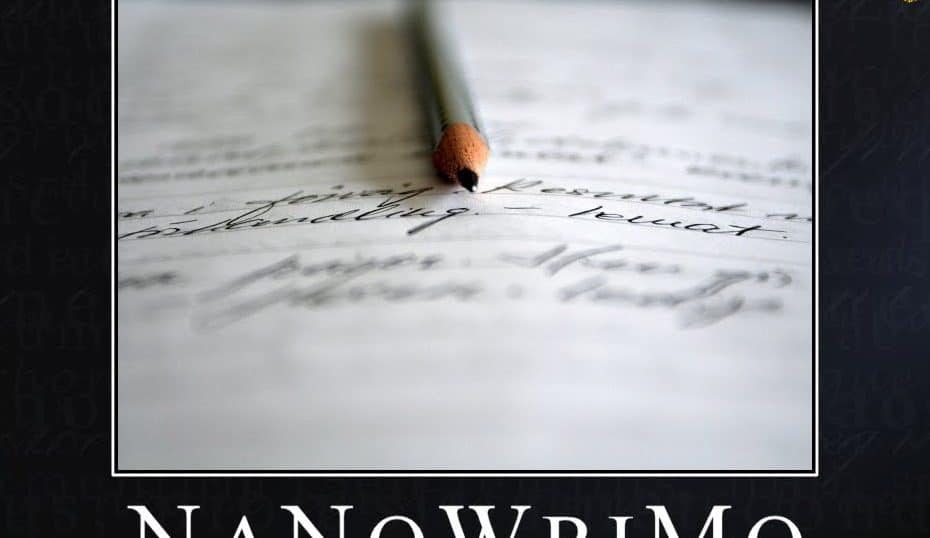 This popped up. I take no responisbility for what you are about to see, however, I think Mr. Jenks will get a kick out of it. 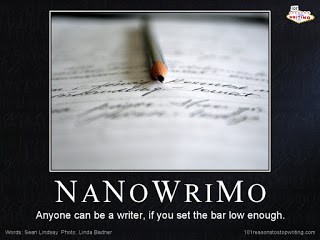 I got to 25k words, which I did by the 15th, and I just completely stopped.

I’m going to now rip something straight from Lily’s blog, which I told her I was going to do. Lily and I like to post conversations. She posted one yesterday between her mind and body that was simply fabulous. Go read that shiz.

Anyway, I present you with the conversation between my Mind, my Muse, and a few others during the 30 days of NaNo.

Day 1
Muse: Travis. Hey. We should really kick this thing off. I’ve got some great ideas. There we go. Yep. Open up Word… Yep. There ya go. Just put your fingers on the keyboard. That’s it. I got it. No, no. I got it.
Me: Wow. We got through 2k words wicked fast. It’s college basketball season. I’m gonna go watch.

Days 2-7
Muse: I’m really enjoying this, Travis. You’re sitting down at the computer and just letting me work. You should brag to a lot of people about how you’re going to finish this. I know you can do it.
Me: Listen Muse. I quit things. It’s what I do. I know you haven’t been around for the diets and exercise plans and my last 16 trys at novels, but I really don’t think we should start broadcasting it now.
Muse: Hey. I’m here now, bitch. It’s different this time. I’m gonna pull this out. Go ahead. Call your mom and type a blog about how good it’s going. Go on. Then let’s write!

Day 13
Me: Hey Muse? Where the hell have you been? I’ve been sitting at the computer a lot, and all that’s coming out is blogs and comments on peoples blogs. You have kinda been MIA here.
Muse: Oh shit! Are we still doing this? I’ve been watching college basketball!
Me: Yeah, this thing is still going on. Kind of important. We’re about 10k words behind.
Muse: I got this. You got those kids in ISS, keep em quiet and sit down at the laptop. Atta kid. Let’s go.

Day 15
Muse: 10k words in 2 days. You got any more questions?
Me: Well, I’ll be honest, I’m quite impressed.
Muse: Of course you are. I’m the shit. Without me, you’d be stuck at Chapter 2, wouldn’t you?
Me: Yeah… Probably.
Muse: Aren’t you glad I’m here?
Me: Yeah… I guess. We should probably keep a steady pace from here on out though.
Muse: Hang on. Is UNC getting beat? Dude. They’re getting beat. Let’s blog about it!

Days 16 and 17
Me: Where the hell is my flash drive?
Muse: Flash drive?
Me: What I kept the novel on!
Muse: Hell, I don’t know. Wake up Memory and ask him.
Me: MEMORY!
Memory: Hey guys. What’s up?
Me: Hey man, do you know where my flash drive is?
Memory: Flash drive?
Muse: Yeah man, I didn’t know either.
Me: Hey. HEY! You know, the thing I put my novel on?
Memory: You’re writing a novel?
Muse: No. I am. He sucks.
Me: HEY! I just need to know if you’ve remember where we put it.
Memory: No, but I remember that college basketball is on, and aren’t we getting ready for turkey?
Stomach: TURKEY!!!
Me: Stomach, shut up. Memory, yes, we are, but dammit man! I need that flash drive!
Muse: Turkey does sound good, man.
Stomach: Dressing maybe? Gravy?
Muse: College basketball…
Memory: What were we looking for?
Me: ………..

Day 18
Memory: Pants.
Me: What?
Memory: I’m pretty sure that you left it in your pants.
Me: I left what in my pants?
Memory: Hell if I know.
Muse: The flash drive, you idiots.
Memory and Me: RIGHT!
Muse: I can’t write today though. I’ve got shit to do.
Me: Okay, but be here tomorrow, ready to work.
Muse: Right.
Memory: Hey guys, Memoir Monday is coming up, I’ve got to shut down so Travis has to post about racism in Kentucky, and completely bomb out with it.
Me: What a doucher.

Days 19-28
Me: Muse? Hey. You there? Anybody?
Memory: Who the hell are you looking for again?
Me: Muse. He was here, and then he just kind of went away.
Memory: Right. What do you need him for?
Me: So I can finish my novel.
Memory: You’re writing a novel?
Me: I’M TRYING TO!
Memory: Pants.
Stomach: Dude. Turkey. Duuuuuuuuuude.
Me: FML…

Day 28
Muse: Ahem.
Me: Yes?
Muse: Dude. You didn’t do anything while I was gone?
Me: NO! And where the hell were you, anyway?
Muse: Listen. This whole blogging and novel writing thing just isn’t gonna happen. You can have one or the other, but not both. I just won’t do it.
Me: You’ll do as I say, or I’ll punch you right in the throat.
Throat: Hey man. You’re not punching me. That’s crazy.
Muse: See? You’re outnumbered here. Give this up.
Me: WE HAVE TO WRITE 25 THOUSAND WORDS IN 2 DAYS!
Memory: Hey man, I’ve got some good TMI and Memoir posts. You ready?
Me: NO!
Memory: Why not?
Me: The novel…
Memory: You’re wr….
Me: Don’t say it.
Muse: See man, we’ve got 2 days. You can’t do it. I can’t do it. Have you seen if fingers will just copy and paste the first half to the second half, turn it in and say you did it?
Me: That’s a hell of an idea! Fingers!
Integrity: Hey. Travis. Not cool, man. Not classy.
Me: Integrity, listen. It’s like 4 mouse clicks. How can that be wrong? Other people are going to do it.
Integrity: Other people also watched “Two Girls, One Cup.” Did you?
Me: Sigh… No.
Integrity: And why didn’t you?
Me: Because.
Integrity: Yeah. Because. You idiot, it’s because we have a set of morals, no matter how loose.
Me: Dammit.
Muse: Hey man, I haven’t heard of this girl cup thing. What is it?
Stomach: Don’t do it, man. I won’t tolerate it.
Fingers: Hey guys, I just got a call down here. What’s up?
Muse: Can you google “Two Girls, One Cup” for me?
Fingers: Sure!
Me: NO!
Fingers: So it’s a no go then?
Muse: Naw. He’s stupid. Go ahead.
Memory: Pants.
Me: What the hell? I’m shuttin it all down, boys.
Stomach: Dude. You have leftover turkey…

Day 30
Me: We’re not gonna do this, are we?
Muse: Naw. We have to blame it on something though.
Me: And who can we blame it on?
Muse: What about all those other bloggers out there that didn’t stop blogging for the month? I mean, I had to come up with all those comments…
Integrity: Guys…
Me: Yeah, that’s no good. We can’t blame them.
Muse: What about Thanksgiving? Can’t we blame it all on that? You had places to go and people to see. I tried to get you set down at the computer, but you were too busy…
Me: What? That’s a lie!
Muse: Is it?
Memory: I’m with Muse on this one. You had a lot to do.
Me: I really don’t think I did.
Memory and Muse: YOU HAD A LOT TO DO YOU F***IN IDIOT!
Me: Geez. Alright.
Muse: He’s so stupid.
Memory: Yeah, we can really get him to do anything, ya know?
Muse: He’ll never finish that novel.
Memory: What? He’s writing a novel?
Me: Guys. I can totally hear you.
Stomach: Hey. Fingers. Make me some tacos, will  ya? I’m tired of turkey.
Blood Sugar: Dude. Hey man. Hey. Listen. I’ve got a problem with heights, ya know.
Stomach: Hang on, I’m gonna go whip his ass.
*muffled grunts and struggle*
Stomach: Fingers? What about them tacos? And maybe a little egg nog?
Me: I don’t really know about all that…
Stomach: Hang on, I’m gonna go whip his ass.
*more muffled grunts and struggling*
Stomach: Alright. Let’s try this again. Tacos? Anyone else got a problem?
Muse: Can we watch basketball while we eat them?
Stomach: Deal.
Muse: We’re gonna kill this poor bastard…Oh! Tacos are ready! Where’s that remote…