TMI Thursday: Yes, I HAVE Looked At Lady Gaga’s Vajay.

Folks, it’s TMI Thursday time with the one and only Lilu over at LivitLuvit. She’s a peach of a gal that really does her best to get everyone on the internet to do something embarrassing or nasty on Thursdays, and so far, she’s done a good job. This is my contribution this week. If you want more of this, please for the love of all that is holy and pure, click the picture of those old people having more fun than you did last night. Wait. “holy and pure” and TMI Thursdays should never even be mentioned together in the same POST let alone the same sentence. Aw, just go see her.

That title is gonna kill my traffic. I know it is.

However, the other day, I was tasked with finding out if Lady Gaga is a man or not.

Who is Lady Gaga?

If you asked that question, I’m going to make a recommendation.

I’d like to to feel around for your head. Chances are, it’s in your ass, and you need to remove it. If that’s the case, then talk to your doctor about some sort of emergency surgery, or talk to any Chapel Hill fan about living with it there. They all know about leading a full healthy life with their heads in their asses.

Now that we have that worked out, on with the post.

When I was asked to make my decision the other day, I was in a classroom subbing. I immediately put this up to a vote for the kids, because let’s face it, anything I was having them do was less important.

I have to say, when you have to force a kid to vote just to break a tie, the chances are you need to do more about proving to the world that you are, in fact, a lady.

She squeaked by on the thinnest margin of estrogen, with a vote of 5-4 for the lack of a Y chromosome.

So I went into my research.

I was talking with Jeff from Badly Drawn Monsters yesterday, and I used the phrase “I’ve had my face buried in her business all day.” Followed immediately by “I would totally get in that to look for a penis.”

He stopped talking to me.

Folks, I’ve been through a lot of different media the past couple of days looking for the ol’ stick and berries on the “it” in question, and I have to say, I can’t find either. 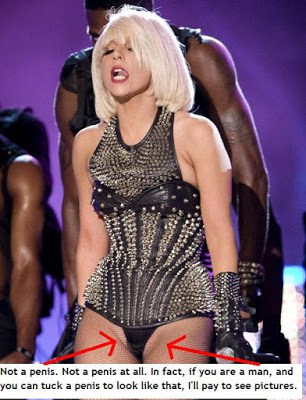 Heh. Send them to this person.

Yeah, there have been some lumps, but not “sugar lumps.” Ya know what I mean?

I hope you clicked that link. I love that band.

They could be lady time lumps, or bunched up underwear lumps, or thanks to new knowledge given to me by Lauren at (Mis)Adventures In Theatre recently, maybe something called ben-wa balls. Thanks for that, Lauren.

Anytestes, from hereto and forthwith, let it be known that on this date, the day of our Lord, I, Travis Sloat, do hereby pronounce the singer known as Lady Gaga, to be a woman. And not only a woman, but a woman I would take home, pour a glass of wine, turn on some Marvin, light a fire, talk about some musical business things for a while, buy a bearskin rug, lay her down on that bearskin rug, ask her nicely to not make her next costume out of my new bearskin rug, and then make the sweet, sweet, maybe ruin my new bearskin rug but it’s okay because I just got Lady Gaga pregnant and she can buy me a new one love to her.

P.S. She can’t be a woman. She just can’t. Want to know why? Have you ever seen Maury Povich, and he’s got those people on there, you know the ones, the ones that look like women, but might be a man? And you don’t want to rub one out while they’re on the screen because they might turn out to be a man and you’d wonder for the rest of your life whether or not you’re gay because you fired off some knuckle children at a man. For sure, let’s just say I’ve already “invested” some of that time into pictures and video of Lady Gaga. So. She’s not a man. Why? Because I don’t masturbate to pics of dudes.