It’s 2010, and I plan on starting the new year and the new decade by keepin it real.

I’ll be honest. I’ve visited one blog in the last two days. I’m sorry about that.

For those of you that got pictures or texts or BlackBerry chat from me last night, I’m wicked sorry about that, too.

My diet starts today, and I think I’m the sorriest about that.

I called your attention today to discuss an urgent matter.

I was watchin M*A*S*H this morning and being too drunk to sleep, when my wife’s friend shows up and drops her kid off. Turns out the whole thing was scheduled, but what wasn’t scheduled was The Missus being in the lavatory when this happend. The lady was late for work I guess, so she went ahead and left, which cause the boy to start bawling uncontrollably and leaning against my glass screen door.

What did I do?

I yelled for The Missus, and settled back down into watching M*A*S*H.

I’m nothing if not a a gracious host.

Anyway, The Missus came back in, took the remote from me, and switched it to Sesame Street.

This is MY house! I was watching M*A*S*H!

Any4077, I start watchin Sesame Street because I was too drunk and lazy to move.

Out of the blue, this douchecanoe shows up. 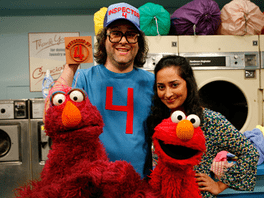 The guy in the middle. With the number 4 on his chest.

This bastard shows up, and he starts pretty much shuttin The Street down because they don’t have things in the quantity of four!

I was so pissed.

He threatened to shut down the laundrymat where that poor Mexican lady in the picture was trying to do laundry because the laundrymat didn’t have four washers and four dryers. How lame is that? That lady wanted to smell fresh. That’s all. She couldn’t help that it was a slightly ghetto laundrymat. They can’t all be winners on The Street, right?

Then he made that poor son of bitch Grover or whoever the red hairy guy that isn’t Elmo is eat like 6 sammiches because they had 10 sammiches, and that wasn’t 4. The dude had to eat them QUICK too, otherwise the douche was going to shut down the sammich shop! Poor shop owner didn’t even understand, either. Wound up running out of peanut butter, and I’m pretty sure the red hairy guy would up having a wicked case of the indegestion on account of eating 6 PB&J sammiches in 13 seconds. That’s a blood sugar spike AND PB cloggin up your works.

Then, he pushed me too far. He tried to shut down the letter R because they didn’t have enough things that started with R. WTF? Where does this sumbitch get off? Shuttin down a letter? Bastard kept stampin everything with big number 4’s, like he was all high and mighty and shit. Who even likes the number 4? The only time the number 4 is cool is when a lady says, “I’m about to give you four blow j’s.” That’s it.

The following is a conversation that took place with Jeff over at This Is Why Your Hold Time Is So Long during the actual duration of the skit or sketch or whatever the hell they called this thing.

Me: They got a number 4 inspector on this show. He’s a son of a bitch. Just shuttin people down. Guy had 10 sammiches, and since it wasn’t 4, he’s shuttin down the place. He made Elmo eat like 6 sammiches. Just to get it down to 4.
Jeff: What a dick.
Me: Now he’s inspecting the letter R! How the fuck can he even do that legally?!
Jeff: He’s out of his jurisdiction there.
Me: He’s shuttin down the letter R. Right now, Jeff. Right now. Wait. They just tried to bribe him. I think it’s gonna work. Dude, I’m blogging about this shit.
Jeff: Do it now.
Me: They just threw a rock at him! Holy shit, man. They’re givin him R word objects. They totally outsmarted him, and then he got promoted to inspector number 5.

So yeah, that’s been my New Years morning.

Someone go get me a Slim Fast and a thing of yogurt.

I love you guys, and thanks for sticking with me even when I’m not givin you the comment love you so richly deserve.

I miss you guys.

I miss your smell.

I miss your musk…

When this is all over, I think we should get an apartment together.

I’m gonna sit the next couple of plays out.