Memoir Monday: My Try Out For The Biggest Loser.

For those of you who aren’t graced enough to be following my 140 character assaults on basketball teams I don’t like, lentil tacos, and basketball teams I don’t like that I call my Twitter page, I will update you on some things now.
Last week sometime I decided to go try out for The Biggest Loser. They were holding auditions in Oklahoma City on Saturday, and I thought, “Eh, what the hell. I’m pretty fat, and I have previous TV experience.” So I decided to make the 2+ hour drive over and see what I could do.
Then, on Friday night, THE FIRST DAY OF SPRING, the Blizzard of 10 hit Oklahoma. For those of you who aren’t familiar, a blizzard in Oklahoma is anything from light sleet, all the way up to 1 inch of snow. Anymore than that, and we start making plans for Jesus coming back.
Either way, it hit. I had my alarm set for 4:15 AM, and when it went off, I damn near threw the clock against the wall. I hit the snooze, set the alarm for 6:15, and went back to sleep. (The original plan was to be at the casting call by 7 AM so that I could be first in line when they opened the doors at 10.)
What wound up happening was that I set my clock to 6:15, not the alarm. So when I woke up at 10:15 AM (8:15) I was pretty wound up. I soon figured out the correct time, and we picked up Kid Funk and made our way to the city.
The trip up was pretty uneventful, although Kid Funk and The Missus will both tell you I was in a bad mood until I had breakfast. (Blood sugar much?)
When we rolled into the Coca Cola event center, The line didn’t seem very long. I got there about noon, and the casting call was supposed to shut down around 6. We hopped in line, and I filled out my application.
The next 6 hours of my life were filled with 3 things.
1. Making fun of fat people while they listened.2. Watching fat people make the McDonalds next door very profitable.3. Watching college hoops on the big screens.
I’ve taken some pictures, and I’m sorry for the amount, but they are all really pretty funny. The long and short of it was, I waited for 6 hours, finally made it back to the room, got sat down at a table with ten other fatties, they interviewed us in a group, and they told us they would do call backs that night.
I never got a call back. Truth be told, I don’t think I was fat enough, if you can believe that. There were some HUGE people there, folks. And really, all I could think about when I left was, NOT ONE SINGLE FART WAFTED UP MY NOSTRILS. The entire time, thousands of fat people, and not one time did I sniff a fart. I was amazed. We’re a classy demographic.
On the way home, my car hit an icy spot on a bridge, and tried to go into a spin. Kid Funk shit himself, and The Missus almost threw up, but for sure, I pulled out of it like a champ. That was the end of trying to drive the speed limit, and we made great time on the way home, with a 2+ hour drive taking almost 4 hours.
Would I do it again?
You’re damn right I would.
So here are the pictures, along with some captions to make your Monday more enjoyable. 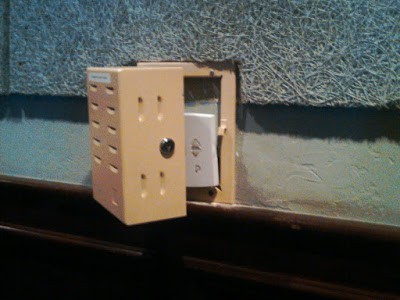 Fact: Fat people WILL tear up the place trying to get AC. 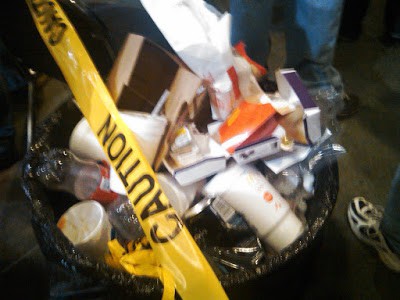 The trash cans had so much leftover trans fat, one of them had a stroke. 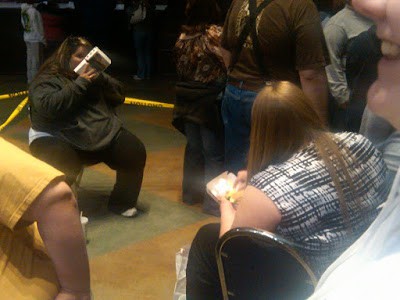 This woman was making a happy plate out of a happy meal… Licked it clean. 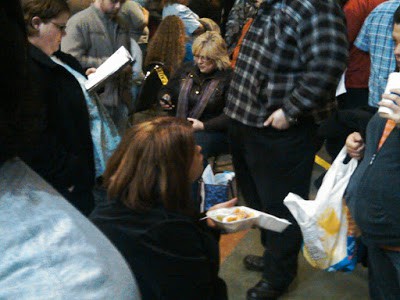 “I’ll have the salad. No vegetables, just croûtons, bacon bits, and ranch.” 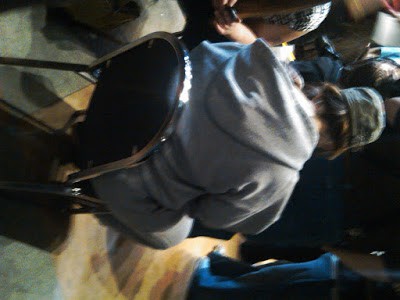 This fucking idiot DRUG a chair around the ENTIRE FIVE HOURS! 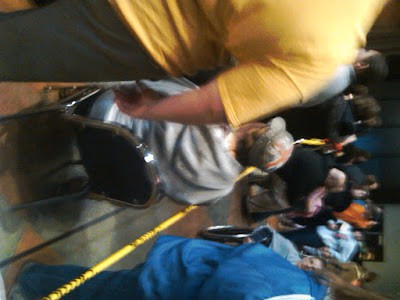 Again. I don’t think she knew they actually make you exercise on the show… 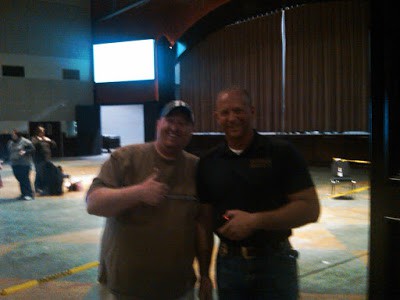 This is Deputy Dan. Deputy Dan almost tazed me, and then yelled at us to “STOP MOVING CHAIRS AROUND OR I WILL RUIN YOUR CHANCES TO BE ON THE SHOW!” 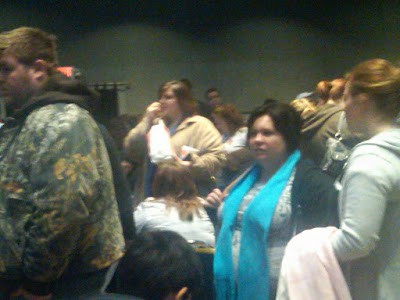 More McDonalds… AND CAMO! Does anyone see a pattern here? (You gotta give me that pun.)
You’ll notice I kept getting photo bombed by a guy in a yellow shirt. Turns out, he was a hell of a nice guy, and I’m not just saying that because he asked for my blog address. Big guy, if you’re reading this, I hope you and your lady got on.
Making out with each other in line though?
Yeah…
Save that shit for the reinforced bed in the hotel.
That’s real.
Other Non-Fatty Filled Lines To Memory Lane: GO READ THEM!
Daffy’s Memoir Monday: Damn Yankee

Joey’s Memoir Monday: I Started To Get Mad.

Micki’s Memoir Monday: This One Time, In An Airport Bathroom… ***ROOKIE***

LB’s Memoir Monday: Crushed In Front Of My Crush.