The year was a very long time ago, probably about 14 years ago.
I was a young lad, still skinny and tall, and all full of adventure and shit.
The setting was Camp Kiamichi, which is a Southern Baptist church camp set in the Kiamichi mountains of Oklahoma, where the normal summer temperature can range anywhere from 103 in the shade all the way to hot enough where pastors can say things like, “If you think it’s hot HERE, how hot do you think Hell is?”
So this is where a bunch of parents decide to dump their kids for the week, amongst the rock and mountains and various wildlife dangers.
Well, one afternoon, my brother, my father and I were walking along a dusty trail on our way back to the cabin we were staying in.
All of the sudden, Brad and I saw it. A lizard.
There was a big thing that year about catching lizards. I guess it is something all young boys do, but for some reason, it was almost like a rite of passage. I mean, a girl would totally go steady with you if you could catch a lizard. Well, if you could catch a lizard AND you didn’t have head lice, which is another story entirely.
So here was this lizard, and much to my dad’s amusement, Brad and I decide to catch it. So we start to corner it, and I’ll be damned if it didn’t run under a nearby rock, flip smooth over and play dead.
Now I was used to seeing a lizard shed it’s tail to evade capture, but I had never seen one play dead. This was before the Discovery channel, and it was before I knew that this particular lizard DOESN’T play dead. So I ambled up to catch the faking bastard, because you have to get up pretty early in the day to pull the wool over my eyes.
My dad, being the level headed thinker he was, stopped me right before I put my hand under the rock. “Travis, hold on. I don’t think lizards play dead. Hold on.” So I held on. My dad got down on his hands and knees to peer under the rock, and I got down with him. That was when we saw this. 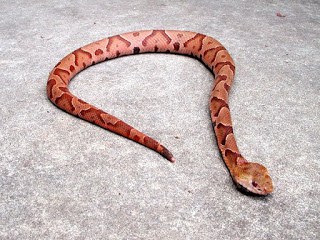 For those of you who don’t know, that is a Copperhead, and it is one of the few species of poisonous snakes we as Oklahomans have the privilege of sharing our state with. Turns out, our friend the lizard wasn’t playing dead after all. He WAS dead. He had run under the wrong rock, which was a rock where I had nearly stuck my hand, and was about to be eaten by our good friend the Copperhead.
However, my father decided he couldn’t allow that snake to stick around a children’s camp. I’d like to say he gently coaxed it into the open, then put it in a container and released it somewhere off the grounds. If you’re a PETA supporter, then you can stop reading now.
He poked at it with a stick until it came out from that rock, then he bashed its head in with another rock. Then  Brad and I took turns throwing rocks at it, then a few more kids took turns doing horrible things to it. From there we threw that sumbitch in the woods to be picked apart by birds and wild animals.
And that is another way I almost died, and another reason why I’m still alive today because of my fathers wisdom.
And his vicious snake beating skills.
Other Non-Possum Playing Walks Down Memory Lane: (GO READ THEM!)
Aimee’s Memoir Monday: My Weekend, My Kids, Passion.
Madmother’s Memoir Monday: When We Were Very Young.
Daffy’s Memoir Monday: Let’s Try This Again.

LB’s Memoir Monday: 10k Walk-A-Thons and Why Skin Cancer Is Gonna Get Me.