Memoir Monday: Accuracy? Only On Accident.

I’ve always had this sort of uncanny accidental accuracy when it comes to throwing things. If you gave me a baseball and set me in a field full of babies and told me to hit one of them with the ball, I will somehow miss all the babies completely, and instead land the ball squarely on the base of the Eiffel Towel, triggering a hairline fracture that will cause it to come crashing to the ground, killing approximately 5,345 people.
Tell me NOT to hit a baby, I would undoubtedly try to set the ball down as gently as possible, the ball would slip from my hands, bounce off of a trampoline and would somehow strike each child in the field not only in the head, but in the soft part of the head, thus giving each of them permanent brain damage, and giving me the opportunity to spend the rest of my life in prison where I will be violently gang raped by “The Sisters.” And no, I won’t be able to come up with a fancy line about how sharp instruments trigger a bite reflex, thus saving my virginity.
Allow me to give you a few examples.
When I was about 10, I was involved in a game of “jarts” (lawn darts) with my younger brother at my grandparents house, only we were playing with a twist. The twist was that in order for you to successfully score a point, you had to make sure the jart cleared my grandfather’s Buick Regal. Oh. And you had to make the throw standing about 4 feet from the car. Oh. And no overhand throws. So I wound up, I let it fly, and that jart flew right at the WINDOW of my grandfather’s beloved car. Instead of crashing through the window, the jart hit the metal trim just above it, denting it rather badly, and fell to the ground. 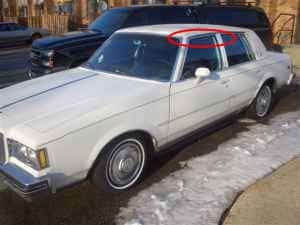 I pissed myself, y’all. Scary accuracy.
Then there was the time I decided I liked a girl in my second grade class. She was beautiful, and her name was Lacy. I was going to marry Lacy, all I had to do was figure out a way to propose. I thought long and hard about it, and then I decided that the best way to propose would be to hurl rocks at her whilst she was swinging during recess. I got a neat little pile of rocks, David style, and set up camp by the monkey bars. I turned loose the first rock, it sailed high into the air, looked a little long, then caught her square in the temple as she was swinging up into the air. This caused her to turn loose of the chains on the swing, which caused her to complete a series of rather astonishing in-air acrobatics before finally coming to a rest about 10 feet from the swing set.
I can’t really put into words the amount of trouble I got in for that. Also, she declined my proposal.
Then there was the time I decided to have a dirt clod fight with a kid in the 5th grade. We armed ourselves and went into positions, ducking, running slant routes, taking aim. I fired first, and with laser guided missile like accuracy, the clod found the kid’s head. Instead of exploding on impact the way dirt clods are SUPPOSED to do, this kid’s head immediately started gushing blood. Turns out, instead of a dirt clod, I’d armed myself with a really dirty rock.
It took a few stitches, but he’s fine now. Seriously. He only had to repeat 5th grade three times.
Fast forward to present day, which was actually about 3 months ago. I had just started playing tennis seriously, and I was ready to take on my youngest brothers, The Liar and The Youngest, in a doubles game in which Kid Funk would be my partner. The first set was over, Kid Funk and I victorious, and we were setting up for the second set, and The Youngest started talking crap. I took aim carefully, and I hit an incredible forehand…right into the eye of the The Liar, who had just stood up from looking at his phone. The eyeball, y’all. His cornea immediately filled with blood, and he had to be rushed to the ER, and to this day he claims he can’t see good out of that eye.
All I’m saying is, if you want it hit on accident, give me a call. If you gave me two lawn darts and told me NOT to hit anything in the Middle East for fear of starting war, you’d find Bin Laden two day’s later, dead on the ground with a jart sticking out of his femoral artery.
Other Walks Down Memory Lane. (GO READ THEM!)
Ally’s Memoir Monday.
Madmother’s Memoir Monday: Everyone Needs A Monty.

Ed’s Memoir Monday: The Time I Took Weed To School.