A Little Something About My Drive To Work… 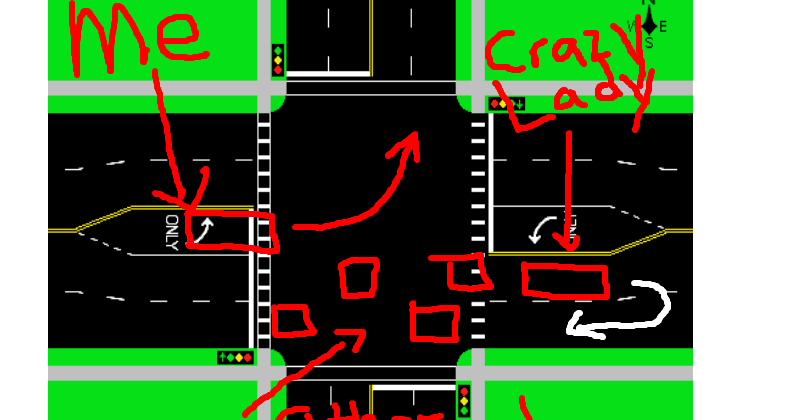 Most of you know my drive to work sucks more than a Dyson on cocaine.

Today however, it reached a new point.

Back in this post, I outlined a couple of roads where people like to pull out in front of me on my drive. Usually when this happens I’m running at about 70 MPH, and when they pull out in front of me, I have to lock up my brakes and pray to the Good Lord that I don’t rear end them. It also cuts into my Facebook/Twitter/Text time on the drive to work.

This morning, as I was driving along at about 70 MPH, a lady pulled *almost* into the intersection, and then slammed on her brakes, bringing her just inches from her car jutting out into the roadway. I had already started applying easy brake pressure, but I was able to back off and continue along. This prompted me to be nice, and instead of giving her the finger, I just kind of held both of my hands up in a “What the heck?” kind of gesture.

Well, things had clearly escalated. She wanted to act like she had done nothing wrong, so in order to make sure that she KNEW she had messed up, I flipped her off. Now. I’ve been trying to get back in church and straighten my life up a bit in preparation for kids and…you know…eternity and what not, so I’ll be the first to tell you I felt kind of ashamed to be driving by her with my middle finger at full mast. However, it felt pretty satisfying too. “There. She now knows she’s wrong, and she knows never to drive like an idiot again.” Those were my words as I sped happily on down the road, feeling good about my ability to be a teacher of the rules and regulations of the Oklahoma Highway System.

When I passed this lady in the intersection we were about 10 minutes from town. She was also about 10-15 cars back from me on a road that is barely accommodating of 2 cars side by side, much less open for passing.  Folks, I’m here to tell you, this lady overtook 15 freaking cars and caught up to me at the last intersection before I turned to pull into my work.

SHE FLIPPED ME OFF.

Let me set the situation up for you with a little picture. 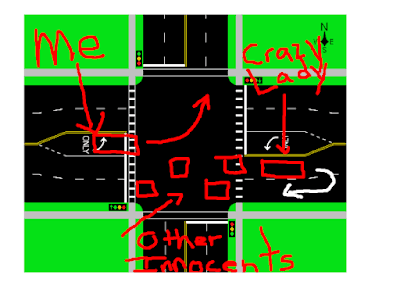 Here’s what went down. I was turning, and as I turned, I gave the lady the “Come here” hand. You know the one. Palm facing you, bringing all 4 fingers down towards you then release and repeat. The one you give when you want to let someone know you’ll fight them, but you’re too lazy to start it.
The reaction I got seemed as though I gave her the “GET OVER HERE!” hand, as seen here:

I CRAP YOU NOT, this lady slammed on her brakes in the EXACT spot as indicated in the picture above, then attempted to take the white arrow route to get back to me. WITH OTHER TRAFFIC BEHIND HER.
I’ll let that sink in.
I am so glad I made it into my parking lot safe and sound. I don’t think I wanted to have to fight this chick. Mostly because as crazy as she was, I’m pretty sure I’d have gotten my butt kicked. Also now I’ve been going out randomly to the parking lot to make sure I still have a nice paint job and my tires haven’t been slashed.
And that’s my drive to work this morning. Hope you enjoyed it as much as I did.