The Adventures of Young Travis.

The year was 1994, and I was in the 5th grade. Already standing 5’8″ and weighing in at anorexic 90 pounds, 5th grade Travis was a weakling. I was also just starting to take an interest in the ladies. One in particular had caught my eye, and one day while riding bikes I asked her to be my girlfriend. She said yes, and Travis got his very first main squeeze. Fast forward a couple of weeks and we had broken up. Don’t ask me why, I don’t remember. Enter this douchecanoe named Mike. 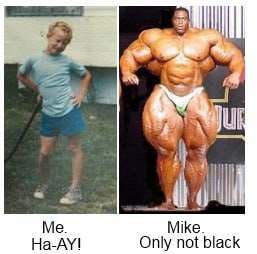 I hated Mike. Mike had failed the 5th grade like 8 times. Mike was overdeveloped, and Mike used cuss words. That was a big advantage back in grade school, because I wasn’t allowed to cuss. As a matter of fact, the very first time a cuss word knowingly slipped from my mouth, it was directed at Mike. For the longest time, I told everyone that if I had one bullet in one gun to kill one person with and not suffer any consequences, it would be Mike. I hated him that much. The reason? Mike went after this girl the SECOND we broke up. Now, I’m thinking, “Well, she’s too broken hearted for Mike. She’s still pining away for me and sweet blond curls.” Also, I had an INCREDIBLE set of calves from riding my ten speed, y’all. That’s right. She wasn’t going to be Mike’s girlfriend.

SHE STARTED BEING MIKE’S GIRLFRIEND.

I was pissed. But then I saw the thing that pushed me over the top. The thing that made my stomach curdle. Mike and this girl…they went ALL THE WAY. Now bear in mind, this is the 5th grade. Going all the way was holding hands. And they totally did it y’all. Right in front of me. My 5th grade heart shattered into tiny pieces and my soul was crushed. My world was ending, and I decided right there and then that I would have this girl back. So I devised a plan.

I started writing a letter. The letter went something like this:


I hate you, and I want to break up. Sorry it didn’t work out, but I like this other girl, she’s cuter than you. I think you should go out with Travis again, he’s cool.


It was genius! It was madness! It had to work! I creeped the halls like a stealthy Dear John ninja until I saw them both disappear into their classrooms. I quietly slipped the note into her locker, thinking about how nice it was going to be to say that I had a girlfriend again. I MIGHT EVEN GO ALL THE WAY. I knew she was a hand slut now, so I figured my chances were better. I waited…and I watched. I never did see her open the letter, but I knew she’d gotten it. So I waited a little more and…

The next day this girl’s best friend walked up to me. “Travis, she knows you wrote that letter, Mike can’t write.” Alright, so maybe I made up the last part of that quote. I’ve GOT to learn to let stuff go. But anyway, the jig was up, I’d been busted. Mike was pissed beyond reason, understandably so, and so I went into a sort of playground ninja mode until the threat level went from “Imminent” to “Seafoam Green.”

I dated this girl once after that, in the sixth grade, after I bought her some chicken nuggets on a field trip. When we got back on the bus, my best friend at the time explained to me in no certain terms that she was being a gold digger, only he used a term that would have been relevant to us at the time. I would say “nugget digger” but that brings a whole new element into the equation. I never did go all the way with this chick, and I didn’t get another chance at that until I was old enough to know what the real “going all the way” was. And I didn’t even get to do THAT until I was 19.

But the moral of the story is this. If you’re going to forge a note, make sure you type it. Handwriting identification is not just something you see on CSI: Miami.