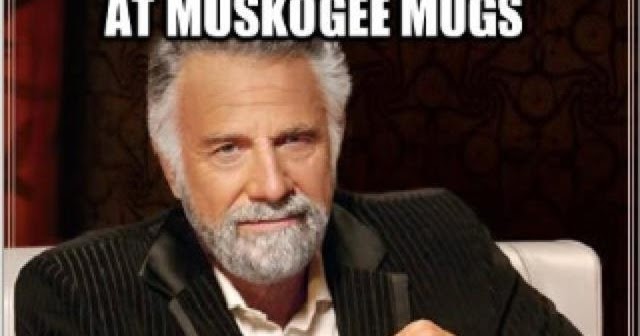 It always seems to start the same way. I get a Facebook update saying that Muskogee Mugs has been updated, and I click the link, and my hungry eyes start to devour information, greedily processing names, photographs, and charges, all in the hope that I’ll see someone I know, so that I can snap a picture, embed it in a text, and send it on, saying something like, “Can you believe they did this?”

And sometimes it goes the other way. Sometimes I see a face of someone I know that works at a store I frequent, and I can see the charges, and I know I need to watch my children a little bit better when I’m at that place of business. Folks I’ve talked to say the same thing, one person said they like to know who is coming into their store, and know if they’ve been arrested for robbery or something similar.

And then sometimes it’s funny, like in the last minute, where my best friend sent me a picture of a mugshot, who has the same name as a mutual acquaintance, obviously NOT the same person, with the caption, “She used to be a lot cuter.”

But it all boils down to the same site (I am aware that there is more than one, but since most of my audience is Muskogee bases, Muskogee Mugs is being discussed here today), with the same pictures. Sometimes the people are smiling, as if the photographer said something humorous right before they snapped the picture. Sometimes the person being photographed is obviously still under the influence of whatever it was they were arrested for. And sometimes the person is crying, or stoic, visibly ashamed of what they’ve done.

Truthfully, there is something entertaining about seeing the worst of people, neatly organized in alphabetical order by name, so easily found on the Internet. I wanted to dive deeper into that feeling, to ask around and see what others thought, and then organize that information so that you could easily form your opinion on whether Muskogee Mugs is a good or a bad thing.


“I would say that in the beginning, the interest is generally puerile and voyeuristic; but that’s the case with anything of this nature. Over time, however, the interest matures and the site becomes a necessary and valuable information source.” – Owner of Muskogee Mugs website

This ties in with the general feedback I got from Facebook on the matter. One person mentioned that it helps her recognize people who she might want to be a little more guarded against. So the site can be used for research purposes, and might in fact keep viewers from becoming victims by educating them about who has been arrested for what.

“I do think Muskogee Mugs is used mostly for entertainment, which is fine with me; however now I think I’m more worried about being on the site, than I would be going to court or paying a fine. Muskogee Mugs is enough to keep me from committing a crime. – Blake Russell

“We’ve heard dozens of stories about people who were drinking and who called a cab instead of driving home for fear of being on our site. In cases such as that, there is the chance that our site could have saved a life or two.” – Owner of Muskogee Mugs

In this instance, we see that the fear of being put on the site has become somewhat of a crime deterrent in itself. But why are people afraid of being seen on Muskogee Mugs? Is it the shame, humiliation, and embarrassment that being pictured brings? I for one am supportive of the fact that we have another reason for keeping people away from breaking the law, but what does that cost us as a society?

The third pro focuses more on checks and balances in the law enforcement sector. Again, we turn to the owner of the Muskogee Mugs website.

“It [Muskogee Mugs] lets people know exactly what the police are up to, and where their tax dollars are going for things such as the jail and the police force. It also helps keep the police in line. In Muskogee, this isn’t such a big deal, but in Tulsa, they arrest people for ridiculous charges such as no headlight on a bicycle or having a cat without a leash. Our sites publishing that information serves to let people know what’s going on, and that’s an important function of media.”


So here we have the ability of a site like Muskogee Mugs to show the public the charges a person was arrested for, which in turn lets them know what the police force is doing. In once instance, someone was charged for “Resisting Arrest,” with no other charges filed. How can you have a resisting arrest charge without a charge that led towards the arrest you were resisting?

In the Pros section, we have the site shown to be an effective research engine, a crime deterrent, and a checks system for the local police force. But what are the cons?


“I would love to be able to update the mugs with the disposition of the charges, but at this time it’s impossible to do that because of the way the system works.” – Owner of Muskogee Mugs

“The public doesn’t care about innocence or a fair shake. Once their pic is posted, the individual is guilty according to public opinion. There is never a follow-up to the outcome of innocence or guilt post publication or trial.” – Jeremy Mustain

This is a big flaw that I see in sites like Muskogee Mugs. You never get a real update on what happened in a particular case unless it’s broadly announced by news media, or you follow the case closely yourself. The person could be innocent, and you’d never know it unless you do the research yourself. All you see is the initial bad. If an employer was looking for your online presence and stumbled across your mugshot online, they might not even bother asking you how the charges panned out, and instead remove you from consideration of employment.

“I have mixed feelings. Some people deserve it, but their innocent children do not. I know of cases where the children were made fun of because Daddy got arrested.” – Belinda Clark

Here we will discuss two things. Both the effect that a public social stigma can have on the family, and the comments section below each picture listed on the Muskogee Mugs site.

First off, children being bullied is not something that is every going to be completely stopped. In recent years, it has been addressed time and time again, and enormous headway has been made. However, with a site like Muskogee Mugs, which is easily accessible by anyone with an Internet connection, it is very likely that kids will see, or be told by their parents, about other kids’ parents who have been arrested. This is going to lead to bullying. Does that mean the website should take responsibility for this? Absolutely not.

The other negative in this section is the fact that comments are allowed on each “mug” via a social plugin for Facebook. This means that anyone with a Facebook account can comment whatever they want on a “mug,” and this usually isn’t very nice. In fact, in most cases it is downright mean and slanderous. Should the people that have been arrested feel ashamed if they are guilty? Absolutely. But should they have insults heaped upon them like they’re on a Comedy Central roast? I don’t believe so.

The last con is more a matter of personal opinion than anything else. And since this is my personal blog, you get stuck with it. And since that comment box down there can be turned into your personal opinion, you have an opportunity to speak out and tell me how wrong or right I am.

I feel like it speaks to us deteriorating as a society. We are so eager to see other’s misfortune, so hell-bent on seeing someone “get theirs,” and so happy to see that Karma has come full circle, that we are starting to ignore what might be opportunities to minister to those who need it most. Instead, we focus on degrading them as much as possible, and maybe even silently thanking God that we’re not there, refusing to admit that almost all of us have at one point and time done something that could have landed us there had we just. been. caught.

So where do you stand? This entire blog is aimed at the entire community of Muskogee and the surrounding areas, but don’t let that stop you from putting in your two cents worth. Are you pro-mugs? Anti-mugs? Why? I will be loosely moderating comments, but for the most part, you can say what you need to say as long as you aren’t being derogatory. I look forward to hearing from you all.