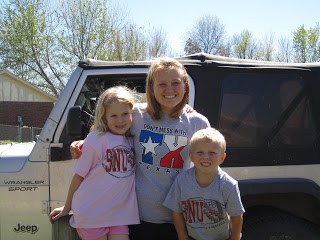 I’m going to tell you a story today about Jennie.
No, not this Jenny, even though that’s the first thing that always comes to my mind when I hear that name.
I try to be a “credit where credit is due” type of person. If someone does something for me and my family, I want to brag on them a little bit, kind of give their ego a little boost. In my mind, that’s the best form of repayment, when no real price could ever be named. I don’t always succeed, but I like to think I hit more than I miss.

A few months ago, I blogged about our adoption process. In that blog, I mentioned a family that was very interested in adopting Akeeli and Aven before they knew about us. The state, for whatever reason, decided ultimately to give them to us, but it’s not like there was a giant fuss or anything, we just had the training done already, and they really wanted to get the kids placed.

To put it mildly, this family is amazing. I said in the original blog that the kids had winners in every corner, and I hold true to that to this day.

However, there is one particular member of that family that I’m going to brag on today. It’s a young lady, twenty years old, who was still a teenager when Akeeli and Aven came into her life. A young lady who we met on the second visit to see the kids and who we watched dissolve into tears when she met us. When she met the people who were going to be taking them away.

This is her story.

At a time when our children didn’t have anyone to love them, Jennie and her family were there. At a time when they desperately needed stability, Jennie tried her best to give it to them.

And it cost her.

My wife still has nightmares where someone knocks on the door, tells us the children have to go back for some reason, and takes them out of our lives as quickly as they came in.

Not in the way we would, not in the way that she had them day and night and was a parent, but in the sense that these two kids wormed their way into her heart (the way they do everyone) and then she watched them pack up and leave.

The kids talked about her constantly when we brought them home.

“Jennie did this.”
“Jennie took us there one time.”
“We went to church with Jennie.”

So it was no surprise when one day, Aven was talking on the phone with her, and just decided he was going to invite her to the zoo trip my wife was planning for them.

I’ll be the first to admit, that was awkward. You see, all we’d been told about the family was that they wanted the kids as well. To us, at that point, they were competition. I also thought that it was a bad idea simply because I saw her as a spy. Someone who would report anything to DHS to have the kids taken back in the trial period.

The zoo trip came and went. The kids were angels for her. The Missus fell in love with her, and the way the kids responded to her.

From that moment on, Jennie has become part of our extended family.

She is currently going to college, and our children have inspired her to go into Social Work. She has her head on straighter than any twenty year old I know, and I firmly believe that one day she’ll make a difference in the world. She’s already made a difference in ours.

She came down and stayed with us over the weekend. The kids climbed all over her, talked to her, jumped on the trampoline with her, played video games with her, made videos with her on her computer, and in general just ignored us for about twenty four hours.

I got the yard cleaned up and mowed. The Missus got to read.

When we first got the kids, we were told that most adopted children needed a contact back “home.” They needed to maintain a relationship with someone that would help ease their transition into a new life. The Missus and I were hugely skeptical about that. All we could think about was losing the kids because they said something that someone thought sounded funny. Trusting anyone from their lives before us was a huge obstacle.

In hindsight, we were dumb. Of course, it’s easy to label it as “over-protective,” but in reality, it was just being dumb.

Some of you may or may not have gotten around 400 new posts from me in your reader over the last couple of days, and for that I am truly sorry. The truth of the matter is, I set up a new blog thinking that I needed to differentiate myself from this blog’s identity, and I couldn’t have been more wrong. 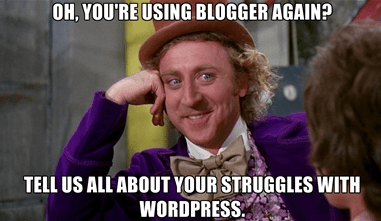 I won’t waste your time by giving you all the details, but if you ever decide to try WP over Blogger, don’t. At least that’s my opinion.

On to posting frequency.

Since we’ve gotten the children, and since I’ve gone back to school, and since I’m still working full time, I really haven’t been posting with any predictable frequency. I’m going to try and change that, and I think being back on this platform, in the familiar arms of my old trusty blog, will inspire me to new creative heights, and will result ultimately in your reading pleasure.

So I beg your forgiveness, and hereby declare that this is the last time I will be wishy-washy to my faithful blog buddies. Or will it? You know, I’m not really sure.

If you want to truly catch up on what I’ve been doing, you can read the following posts, which are actually new. I dated them with the original dates I posted them on WP, so they may not have shown up in your readers. If you want news on the adoption, read the first one. If you want the usual crazy, read the rest.

I love you guys. Seriously.

More on the Adoption.

I Take My Family to a Nursing Home.

Our Son Draws a Picture.

My Dog Made Me Cry.

I Address the Psychology Behind Your Temple Run Character.