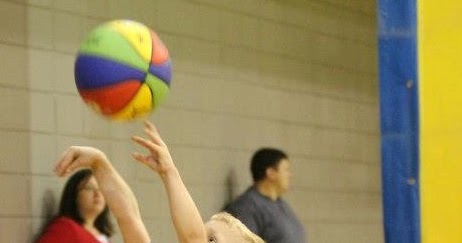 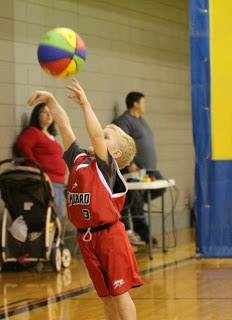 It started the same way at both of the houses I lived in growing up. My father paid a ridiculous amount of money, which I’m sure we didn’t have, to have a cement truck come out and pour the concrete slab. Then he would set to work smoothing the concrete, working it until it was just right, keeping us kids away from it, telling us just to wait, wait, it would be ready in a few days. Then he would set up the goal, and he would always make sure the rim, at it’s tallest adjustable height, was exactly ten feet from the slab…

Saturday was a busy day. I woke up sick, my sinus cavities clogged with anger at the fickle Oklahoma weather we’ve been having.

I had a trainer session at 8 a.m. Bright and early. I blew my nose, I drank my disgusting pre-workout shake, and I headed out.

My schedule for the day included the workout, then driving home to shower and change, then head out the door for a writing assignment that was an hour’s drive away from my house, and that started at 11 a.m.

The one thing I simply did not have time for was my son’s basketball game at 9 a.m. It just wasn’t possible. Even without the workout, it still wouldn’t have been possible.

If the weather was nice, I’d usually be outside on that slab, throwing up shot after shot. It was the place I hit my own personal “The Shot,” and I loved being out there. Every once in a while after dinner, my dad would walk outside to the slab, look at me, and ask, “What’s it going to be tonight?” I’d usually pick a game called “Around the World,” where each person shot from nine different places around the “court.” Every single time, I would think to myself “This is it. This is the night I beat him.” My dad would flip me the ball and say, “You go first…”

The Missus sent me a text Saturday morning. “Are you going to Aven’s game?”

“I really don’t have time.”

She didn’t make me feel guilty, she understood.

And really, if the truth be known, I didn’t feel guilty about it. I was too busy. There was too much going on. Plus, I’ve been to every single other game he has had this year, and let’s keep it perfectly real, Aven is terrible at basketball.

Don’t get me wrong, he can shoot, barely, when he’s practicing. He’s working very hard on his dribbling and he’s coming along nicely there…in practice. Yes, he’s five. Yes, he is appropriately horrible at the game for his age and experience level.

But at the same time, I knew I wasn’t going to miss anything big.

I’d miss the first shot. I’d always miss the first shot. You had to stand under the goal and one arm it up and in, and I did not have the coordination for it yet. Since you got a “chance” shot every time, you could always take two shots on the first and not have to worry about starting over. So I’d try again. I’d usually miss. I’d groan, knowing what was about to happen. My dad would get the ball, and the beating would commence…

I was driving home from the workout, and I was feeling pretty proud of myself for going in even though I was clearly on my deathbed. I was thinking about things the day held, and how I was going to divide my split shift for the day into workable segments.

Not a thought in my mind was occupied with Aven’s game.

Then the text came in.

“Aven just made his first basket in a game!”

He didn’t miss. He never missed. He would go the entire way around the “world” and not miss once. Every. Single. Time. I don’t know how my dad shot so well. I don’t know if he played in school, I don’t think he did. I’ve never heard of him being a hoops legend on the street courts of Coweta, Oklahoma, in his heyday. In fact, I don’t even really know why he liked basketball to begin with, but I know he did. After his first circuit, he’d look at me and say, “Alright, now I have to go back around.” And somewhere in that trip, he’d miss. 18 years later, I’ve finally figured out he probably did it on purpose…

I’ve felt pretty bad about things in my life. There are times I’ve had where I realize how wrong I was, or how stupid I was, and then I usually have the obligatory pity party, where I steep in self-loathing almost as completely narcissistic as the original act I’m “punishing” myself for.

But Saturday, it was different.

Yeah, Aven will have other “firsts.” He’ll have his first game where they actually keep score, his first assist, his first high school game, his first start, and maybe more. There will be a lot more firsts.

But this one was more important to me than anything else.

And I missed it. Why?

“I really don’t have time.”

I’d get my second chance, and I’d get going. After the first shot, the next two were easy. Then the corner shot loomed. This was the shot that would make or break me. I just had to complete one circuit, and this was the keystone on which success or failure was built. Most of the time, I’d miss. Then I’d usually take my chance, and I’d usually miss again. My dad would laugh and say something like, “You won’t beat your old man today, son.” Then he’d rip off five or six straight shots to win the game. After, he’d flip the ball back to me. “Let’s go again.” He gave me another chance…

Aven walked in the door right as I was about to walk out of it for my assignment. To tell you the truth, I had been praying I wouldn’t see him before I left. But he walked in. He looked at me, all ready to go, and all thoughts about his shot left his mind.

“Dad are you leaving already? I never get to see you!”

“DAD I MADE MY FIRST BASKET!”

I hugged him, fast, before he could see the tears. I said, “I know son, and I’m so proud of you.” I turned, walked out the door, into my busy life.

Yesterday at church, Aven met his assistant coach on the walk to door. The coach walked up to him, high-fived him, and said, “Aven! The scoring machine!” He and Aven laughed, and the coach said, “And you had everybo…your mom and your sister there to see it!”

I have no doubt his intentions were pure and it was a simple slip of the tongue. No doubt whatsoever.

But I wanted to tear him apart.

Then, that afternoon, my family gathered at my mom’s house for dinner and the reading of my youngest brother’s letter, which will be another blog this week. As we walked in the door, the talk of the room was Aven’s first basket. Everyone congratulated him, high-fived him, and my brothers were joking with him and in general just making me feel a little more sorry for myself.

I missed it. I always missed the first shot. Then history would repeat itself, and we’d walk to the house, me as the loser, him as the winner, the universe in perfect harmony. He’d always slap me on the back and tell me to keep working. “One day you’ll beat me.” Oh that the “one day” would come! Even though now I would trade a lifetime of losing to my dad to get him back, then all I wanted to do was win. All I wanted was to be a good…

Dad. That’s all I want to be. A good dad. Not great, not spectacular, not anything special. Just good. I want Aven and Akeeli and any other children that might come along to say, “My dad was a good father, and a good man.”

So I kept working. I don’t remember the day I beat him, but I know I did. I’ll never know if he let it happen or not, but I don’t think my dad was that kind of person. My hard work paid off. I kept trying, and I made mistakes, and I kept getting chances, and that’s exactly how real life works too. I’ll keep getting chances at this “dad” thing. I’m sure this won’t be my last big screw up, because it’s certainly not my first. This one just hurt more.

Whenever I think of the word, my mind flashes back to the movie Man on Fire with Denzel Washington.

After a discussion in my Sunday School class yesterday, I’ve discovered I’m not the only person who struggles with managing their time. We’re all busy with work, school, church, family, friends, hobbies, and a billion other things that cause us to lose focus and never complete any one thing with care.

I’ll learn. I’ll figure it out.

My job at the moment is not something which cannot be manipulated. If I have an assignment, I have to take it, because it’s work, and I have to contribute to this family somehow. Could I have chanced being a little late and maybe caught Aven’s first basket? I don’t think I could have. Does that change the way I feel about missing it? No it doesn’t. Not one bit. I feel terrible.

But I get to keep working with at the game. I get to teach him little things I know, and encourage him to try harder.

Aven doesn’t watch the ball when he plays. He watches us. He’s always looking at the sideline, disregarding all the basic principles of the game, eschewing them for us. For our approval.

And my life’s goal is to always be there, looking back at him, waving my hands like crazy, telling him for the love of God just get back on defense, stop looking at us, pay attention to your coach, GO!

As much as I hate time, it provides us with the one thing we all so desperately need. 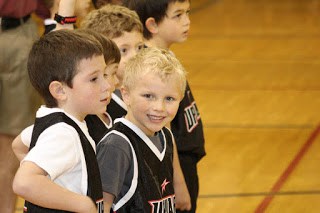