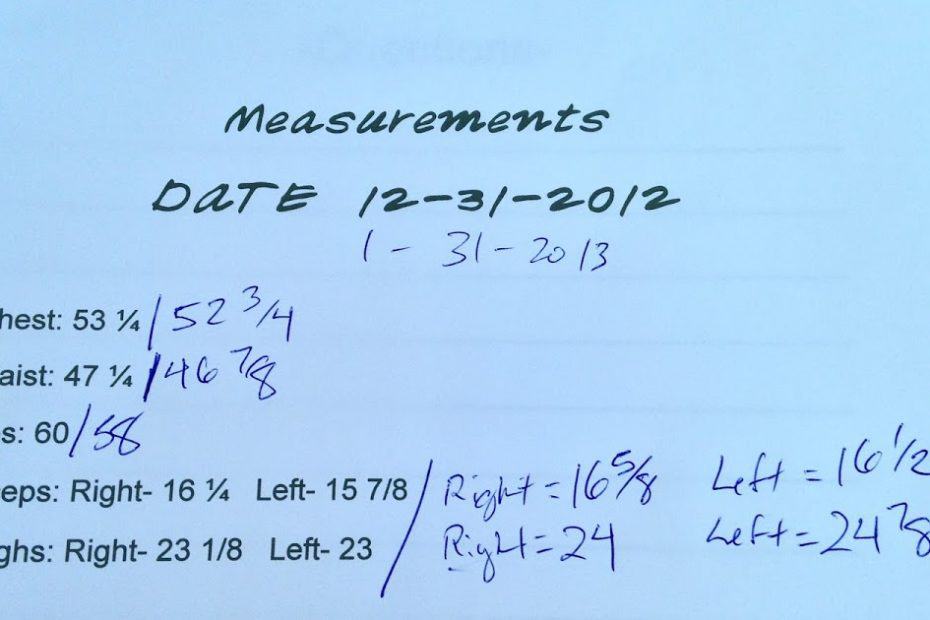 Before we dive into the blog, I’ll update you on my wight loss/get in shape goal. When I weighed in on Friday, I was 341.9 lbs., which brought me down a total of 11.7 for the month. It’s not exactly the most drastic drop, but after speaking with my trainer, he’s reminded me that I laid a lot of lean muscle on this month and that weighs more than fat. Here’s a pic of my measurements, which came down too.


***
Now on to the good stuff.
About a week ago, I had to go take the Oklahoma General Education Test, or OGET for short. I guess when you want to become a teacher, they like to make sure you at least have some general educatin’ in your background.
I am absolutely forbidden to discuss the questions that were on the test, and I signed a pretty strict nondisclosure agreement on the front page of the test that said the state of Oklahoma would take my firstborn and give me a fantastic wedgie if I told anyone about the questions.
However, the NDA said nothing about discussing what took place in the time I spent before I took the test. And believe me, things happened.
Let’s start with how early the test is. I had to report to the testing site at 7:15 in the a.m. 7:15. 7:15.
My kids don’t even have to be at school until 8:30 and that’s not even on the weekend.
Of course the night before, I woke up at 3 in the morning and couldn’t go back to sleep for an hour, so when my alarm went off at 6, I was dragging more butt than a dog on a freshly washed carpet.
In my desire to reach the testing site on time, I forgot to bring “several #2 pencils, sharpened.” I wasn’t gravely concerned because I figured I could pick some up on the way.
I stopped at two places on the way in, neither of them had pencils.
I arrived at the testing site sans pencils, late, and sat down at a table with 5 other very tired people, all of whom had freshly sharpened pencils, industriously laid out, ready to be used.

I looked at the three young ladies on the opposite side of me and said, “Do any of you have a spare pencil I can buy?”

I crap you not, all three of them looked at me, pursed their lips, shook their heads primly and did their best Elaine Benes “I can’t spare a square” impersonations.
“I’m sorry, no.” “I just don’t have any extra.” “You really should have brought pencils.”

The two gentlemen on my side of the table witnessed this transaction, laughed openly, and then one of them said, “Here you go man.” The other one said “And here’s an extra, just in case.”

When I reached for my wallet to pay the blessed men, they both politely refused.
Chivalry, it would seem, is not dead in the male species.
*side eye at the women*
Pencils in hand, I walked down the hall to the testing room. I realized I had been worried about something in the back of mind, almost unconsciously, all morning long.
When I walked in the room, I saw what it was.
The desks.

As a portly person, I live in constant fear of standardized desking. I walk into classrooms and immediately look for the “fat kid desk” or even a table and chair. When I have a new class at the beginning of the semester, I have to get there ten minutes early the first day, just so I can lay claim to the most comfortable seating arrangements, anyone else be danged.

Sure enough, the testing room I was in contained a desk.
A small desk.
My thought process went something like this.
“Dude. You can’t fit in there. No way.” “I totally can. I’ve been working out.” “For a month you fat sack of flan, no way you’re getting in it.” “Watch me.” “What?” “WATCH ME!”
I may have screamed that last part out loud, which got me a few strange looks, but I got to the desk. What happened next can only be described with a gif.

It was rough, and it even hurt a little bit, but I made it. I felt like a beach ball being squeezed between two pieces of flat wood, but I was in there.

There was but one tiny problem.
I couldn’t breathe.
Well, not normally.
I was taking these sort of breaths that were causing other people to look at me with various stages of concern, all of them I’m sure convinced I was having an infarction.
So when the teacher came around and asked for my driver’s license, the following conversation took place.
Teacher: “Sir, I need to see your license.” Me: “The other lady already looked at it.” Teacher: “Well, you have to keep it on the desk, in case you go to the bathroom and try to come back as someone else.” Me: “Oh, you mean someone who can fit in desks better?” Teacher: “Oh! Are you uncomfortable?” Me: “Yes, ma’am. I am very uncomfortable.” Teacher: “Would you like alt…”Me: “YES I WOULD LIKE ALTERNATE SEATING ARRANGEMENTS.”
So the teacher yelled into the hallway.
“EXCUSE ME MR. GUY! YES, CAN WE GET THIS GENTLEMAN SOME ALTERNATE SEATING? HE’S TOO…UMMM…UNCOMFORTABLE.”
For the love of God. She was going to say fat. I know she was going to say fat, and she was about three letters away from giving me an automatic passing grade on the OGET, because I can promise you this, if you call Travis Sloat fat at a party we’ll laugh, but if you do it when I’ve been woken up at 6 a.m. on the weekend to take a test that measures nothing but my common sense, well then sister, you’re sued.
So Mr. Guy went traipsing through the school, looking for seating arrangements large enough to accommodate my industrious bulk.
He brought back a desk that looked as it belonged in a kindergarten classroom or under a meal in Japan. It sat about 3 1/4 inches off the floor. With it, he brought a full size chair.
I spent the entire test bent over, finishing in just under two hours, and leaving looking alarmingly like this:

I’m still waiting on the scores. If I don’t pass, do you reckon I have a legitimate case for a redo? Maybe next time they’ll let me bring in my own seating arrangements, an easy chair and one of those hospital desk things they put people’s food on. I think that’s the ticket.

In the meantime, I’ve designed a new logo for OGET.