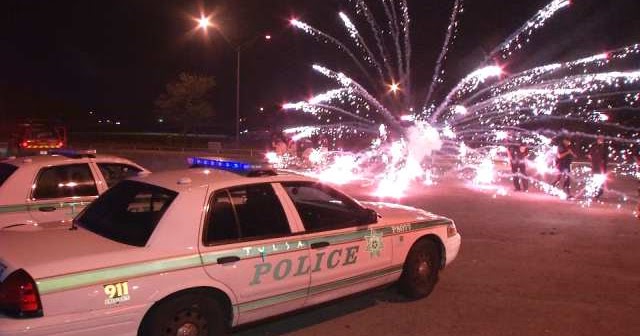 So this happened last night.

Story here via News on 6. (follow the link for video)TULSA, Oklahoma –
Dramatic video Friday morning showing someone shooting an exploding firework at Tulsa Police. It happened around 1 a.m. at Chamberlain Park near North Hartford Avenue and East 51st Place North.Police say firefighters were responding to a small fire on the roof of a building when someone started shooting fireworks at them.The firefighters called police, and the same thing happened to them.News On 6 photojournalist Gary Kruse was responding to the building fire and had his camera rolling when the firework showered sparks at some emergency responders.Officers ran after the group, but they escaped.No one was injured

I just have a few basic questions.
How do you get to this point?
“Hey guys, let’s shoot these fireworks off.”“Y’all know it’s illegal here, right?”“Who cares, I’ve had 3 PBRs. Let’s get crazy!”“‘MURICA.”
*fireworks commence*
“Guys is that the cops?””IT’S THE COPS RUN!””I don’t run from nobody.””Let’s shoot fireballs at them!””Guys that seems like a bad idea.””FIRE IN THE HOLE.””Now run!”
This seems appropriate.

If you’re a cop, what is your training for this? Is there a CLEET Class in fireworks dodging? Do you use a taser in response? Pepper spray? Hand grenades? A gun? Also, is this something they talked about later at the bar?

“There we were, pinned down. The enemy had artillery shells and Roman candles.” “Sweet Moses. Artillery shells? In Tulsa?” “They were fireworks, son. Shut up I’m talking.”
I really want to hear the radio transactions that took place during all this.
“Unit 1, this is Unit 2. We have a problem up here in the park.” “Unit 2, what is the problem?” “We’re hemmed in here, the enemy has us surrounded.” “Unit 2, you say surrounded? With what?” “Bottle rockets, Unit 1. Bottle rockets and Black Cats. Maybe some snappers, I can’t t…”BOOM“UNIT 2 GET OUT HERE NOW IT’S GETTIN’ REAL!”
I bet the whole  scene looked like a Michael Bay film. Rockets and explosions and Shia LaBeefy riding a motorbike through it all with a Muse song playing in the background. Like the founding fathers intended.
I know I’m kind of poking fun at this, but in all seriousness, the people that did this are freaking idiots who deserve to have fireworks shot straight up their nostrils.* Regardless of how you feel about police or the media, you cannot shoot freaking legit fireworks at them. You see that picture? That’s a legit firework. You want to shoot a Roman candle at someone, fine. It’s dumb, but the very worst is someone takes a slight burn.
The best part of this story is that whoever did it got away. Right now there are a group of  people somewhere sitting in a coffee shop** in North Tulsa talking about their “Eff the Police” moment in the sun.
Shout out to the video guy. Staying in there when it got hot. Sort of the Geraldo Rivera of Tulsa photojournalism.