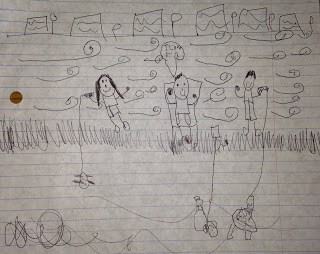 I catched a big fish the fish was ginormous. My dad catched a ginormous turtle. It was a mean turtle. The wind was (unreadable and he couldn’t remember what he wrote). And we went to the military.

Today was really fun. We went fishing and then saw the Ft. Gibson National Cemetery. When we were fishing my dad caught a turtle and said “Stand back.” “Yes sir,” we said back. Clip, my dad clipped him off and it ran madly back to the water. Then I/my dad got a huge fish up to the bank then my dad had a fish and lost it and last my brother caught a fish couldn’t get the hook off but my dad did and then we packed up and left. On the way back I asked my dad “Where is the national cemetery?” And then my dad took us. There were a lot of people who have fought for our country. Then we left, went home, and wrote this. Then ate lunch. The End.

I like to fish.
Today I took our son and daughter out with me. The wind was terrible, and when we got to the pond I immediately regretted spending five dollars on minnows. But we soldiered on.
The lines went in the water, and before long corks started going under. Akeeli did what Akeeli normally does, which is catch a lot of fish but then lose them at the bank.
For the first time since we’ve started fishing, Aven caught more fish than anyone, and he was actually pulling them on the bank and taking them off, then throwing them back into the water.
Then, my cork went under. As I reeled it in, I knew something felt wrong. I told the kids I thought I’d caught a turtle, and sure enough, I hauled an enormous “Tennessee Fightin’ Turtle*” out of the water. The neck on this thing was longer than my leg and it. was. pissed.
I told the kids to get back because it kept charging us, and I kept yanking it up in the air, making the relationship more difficult. I finally got my clippers, stretched it out as far as I could, and clipped the line, letting the thing run straight back into the water.
In the meantime, Aven caught yet another fish.
Then, Keeli’s cork went straight under. Being a girl, and naturally predisposed to not paying attention, she didn’t see it.
“Keeli, your cork is gone.”
She set the hook and started reeling like crazy.
“Dad, it’s too big. You’ll have to do it.”
I took the rod and to my surprise, she had a nice fish attached. Then it jumped. It was amazing. After a couple more minutes, I drug the fish onto the bank…and lost it.
Then I told them about how to construct a “the one that got away” story.
As we left, I sneezed about 600 times and my eyes swelled shut due to my “seasonal” allergies. I was dying.

On the way home, Keeli asked me where the National Cemetery was in Fort Gibson. I asked if either of them had ever been, and they both said no. I figured then was as good a time as any for an object lesson, so I drove them out there.
I told them how those people were the reason we could go fishing, go to church, and be free. I told them there were more people serving who were helping to protect those rights as well, including their Uncle Josh.
As we drove out of the cemetery, Keeli looked at me and said, “We probably better go home, your eyes are watering from your allergies.”
Yeah. My allergies. Stupid allergies.
I like to fish. I love our kids.

I’ve been to both coasts, New York City and San Diego, Texas, Kansas, and a few other states. Each one has their thing, their own special and unique appeal (except Arizona, Lord I can’t stand Arizona, but that’s another blog), but Oklahoma is Home.

I capitalized home because it’s more than a place. It’s like capitalizing Nature or Romance or all those other words that people in the 1800s capitalized because they embodied so much more than a lower case first letter could handle.

Oklahoma is my Home.

The people are genuinely friendly, albeit terrible drivers. We’ll talk to you even if we don’t know you. We mispronounce, misspell, and misuse words. We drop the letter “g” off any word that ends with it. We make do with what we have, talk about what we’d do with things we don’t, and work hard to provide for what we need.

And, just like living in other states, living in Oklahoma comes with a risk, the largest being adverse weather. Those who live here can attest to the weather being sunny one moment, and causing you to search for shelter the next. I’ve worn shorts and a coat on the same day, and not on purpose.

On Monday we faced a tragedy. Although multiple tornadoes ripped through the state, one in particular stood out; the one that devastated Moore, killing numerous people, leveling an elementary school, and causing billions of dollars worth of damage to the city, and unspeakable damage to the lives of those affected.

I scrolled lazily through my Facebook news feed on Monday evening, seeing all the condolences, well-wishes, and prayers sent up for those involved. Then, somewhere in the midst of all the grief, little flashes of hope tore through.

A lady found her dog while being interviewed.

Someone organized a volunteer group to drive to Moore and help those in need.

Someone opened their apartment complex, and the University of Oklahoma opened their housing for displaced families.

Matt Kemp pledged to donate $1,000 for every home run he hits to relief efforts. Later on Tuesday, Kevin Durant of the Oklahoma City Thunder gave $1 million to the efforts.

As a matter of fact, just now, while typing this, I got a phone call from our local school in Fort Gibson saying the student council is accepting donations to donate to the Red Cross.

At every corner it seemed as though a new spot to donate popped up, clothes, food, money, anything people could give, and eventually emergency workers had to stop people from coming into Moore. The outpouring of love and kindness overwhelmed the need.

Let me be clear. What we faced was not equivalent to what happened in Boston. It was not the same as what happened to Sandy Hook Elementary, and it really wasn’t on par with what happened in Joplin last year, because our weather forecasters did one heck of job warning us of what was coming.

But it was still tragic. People lost their lives, their family members, and their possessions. They sent their children to school that morning, only to have them never return. In the blink of an eye, everything and everyone they loved was taken from them.

So. Where was God?

Why didn’t God stop this? He could have, right?

The answer is yes, yes He most certainly could have. I distinctly remember a time in the Bible where Jesus stepped up on a boat and spoke to a storm, calming it instantly. So where was he Monday afternoon?

The answer isn’t an easy one to stomach, especially for those who don’t believe in Him. He was there. He was there and He was in control the entire time, because not one thing happens on this big ball of mud and water without Him being aware and in control of it.

Listen. God allows bad things to happen. He allows tragedy. I don’t claim to know why, and you won’t ever catch me saying I do. However, I know one thing for sure. God is still in control, He loves me, He loves you, and He is the ultimate source of comfort in times such as these.

That said, my thoughts and prayers are with the families and the victims of this most recent tragedy. Lord knows I don’t have much money, but I do have a little bit of free time, and in the coming weeks there is a good chance I’ll try to head down that way and help them clean up. But in the meantime, y’all are in every prayer I say, and you’ve been in every prayer I’ve heard, including the circle our group of pick-up basketball players gathered into today before the game.

As for Oklahoma, well, we’ll recover. Homes will be rebuilt, memories will be shared, and resolve layered with resiliency. Loved ones will be honored, and the shower of kindness and giving will continue. And next year, even moving forward into this year, we’ll see the storm clouds roll in and we’ll worry. We’ll run for shelter and hope everything we love isn’t taken from us. And if it is, we’ll pick ourselves up, dust off what’s left, and soldier on.

That’s why Oklahoma is my Home.

That’s why I love Oklahoma.