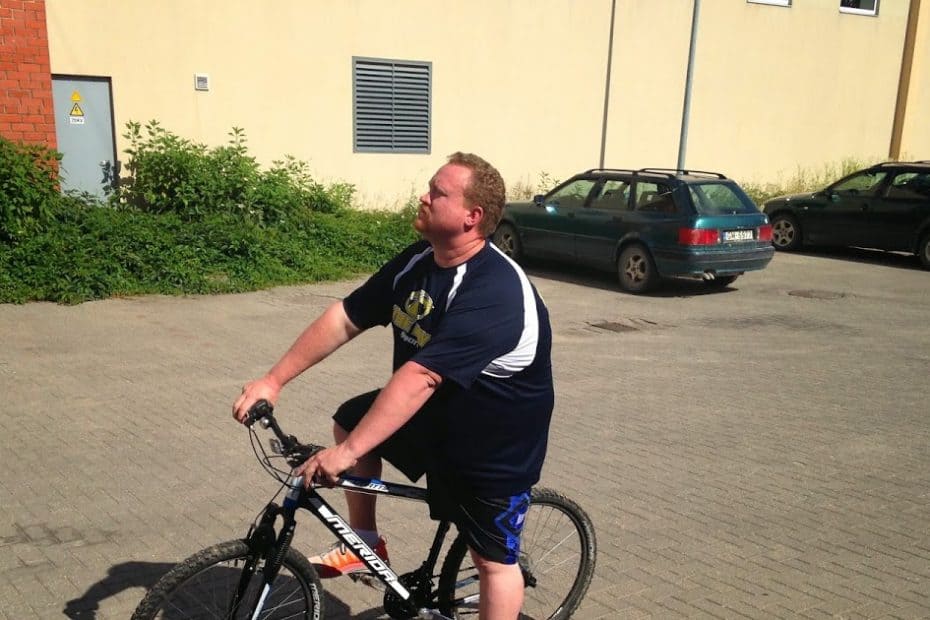 “As I went down to the river to pray,studying about that good old way.And who shall wear the starry crown?Good Lord show me the way.”

Today I went for a 10 to 15 mile bike ride through a Latvian forest. I’m not sure how long it actually was because several Latvians have given several different amounts of kilometers and the only conversion I know with kilometers is that a 5K equals three miles and I base literally all my conversions (including temperature and money) off that.

If I could go back in time I would tell pre-ride Travis several things that would probably make him not go on the trip, and miss views like this: 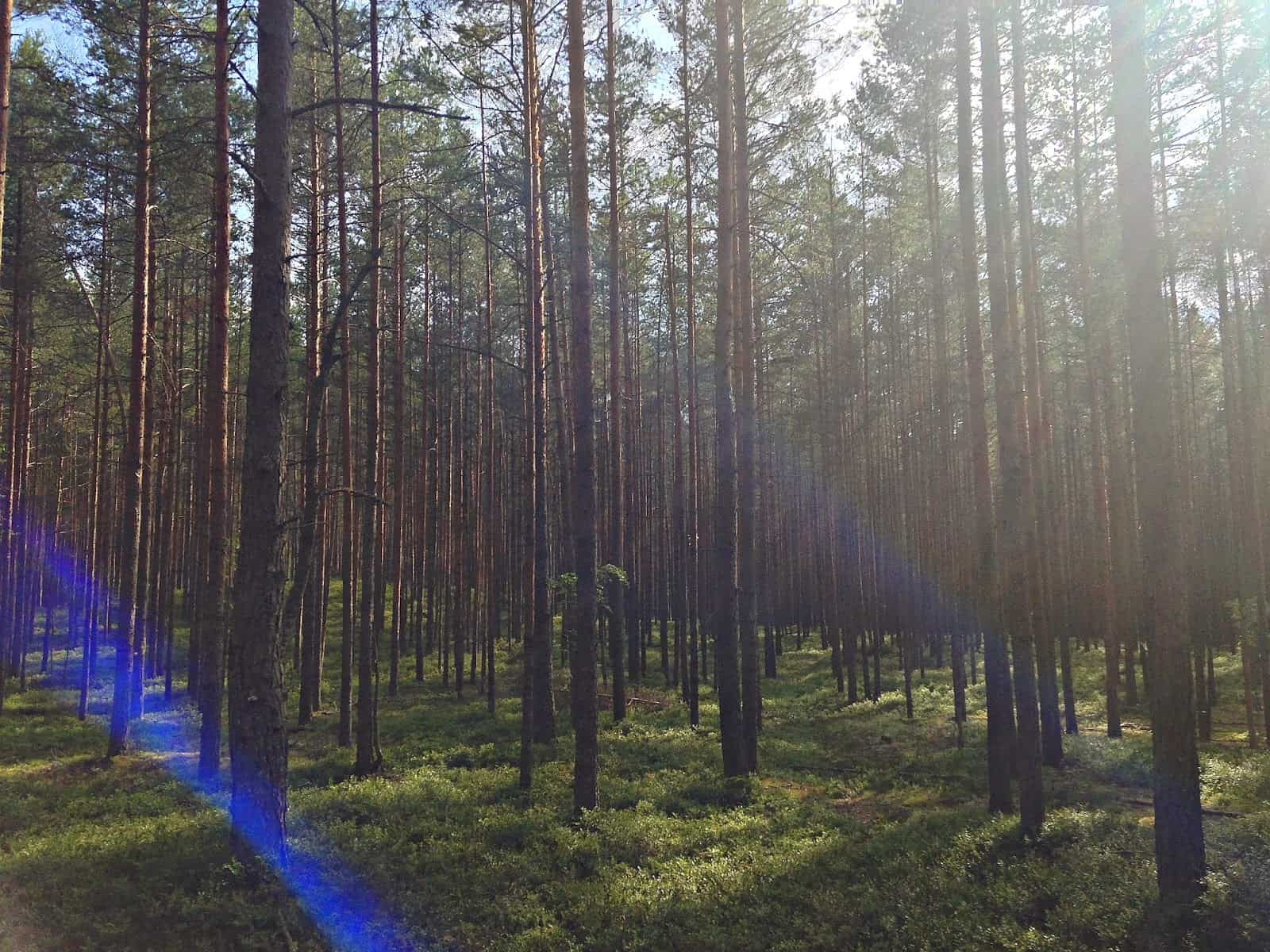 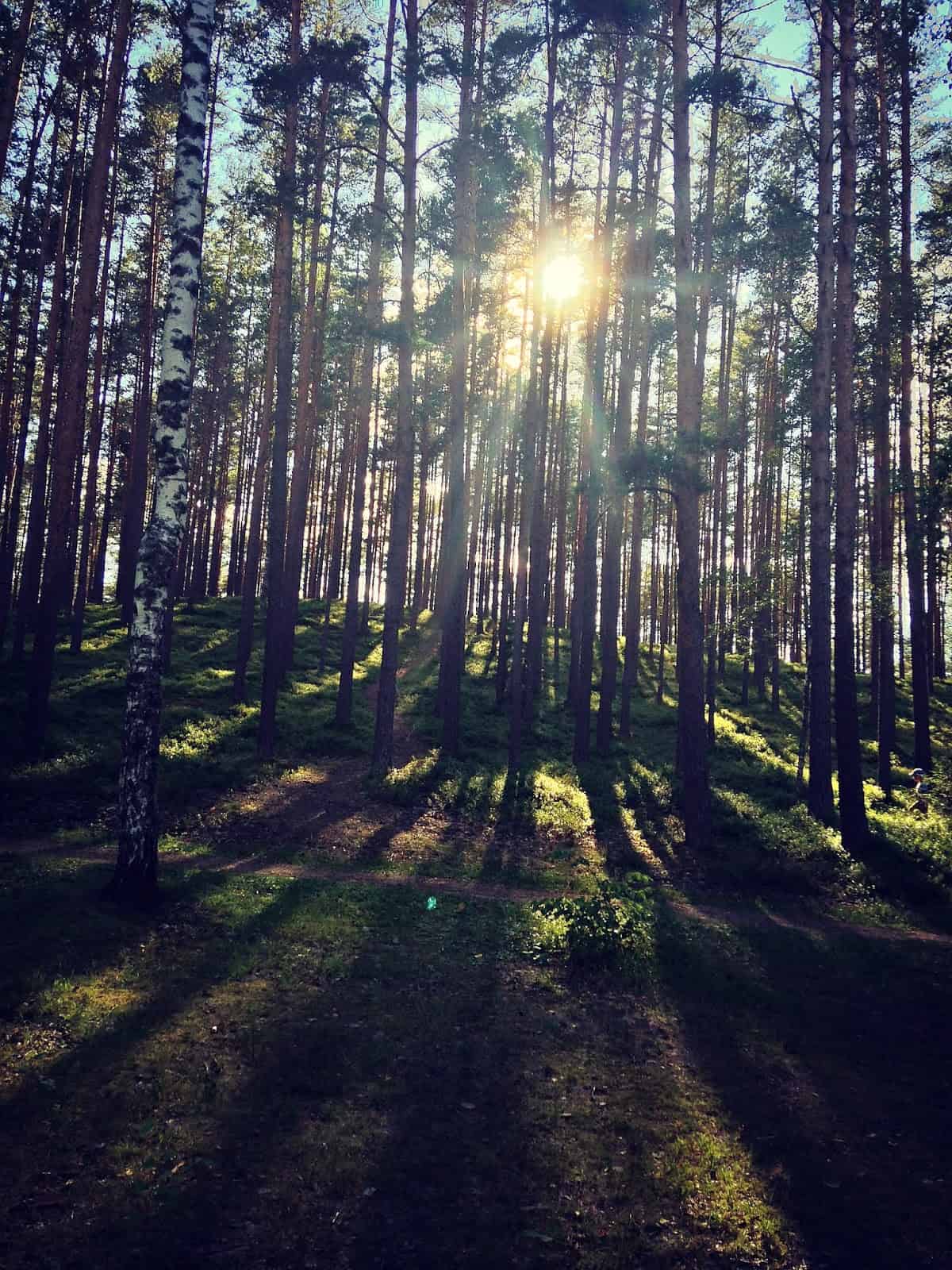 I would have missed seeing a forest floor covered in wild blueberries, I would have missed the fellowship that can come from commiseration, and I would have missed some spiritual wisdom from a Latvian brother and sister who refused to let me finish the ride alone.
I would have also missed the pain I’m currently in, which is ridiculous. I don’t want to gross anyone out here, and if you’re a lady you might want to skip this part, but my taint is like a train wreck. The last time I was on a bike was about 16 years ago, and I can distinctly remember not being in as much pain down there as I am now. I know I weigh about 100 more pounds than I did then, but have we seriously not reached the point in our technological advances that where we have a bicycle seat that doesn’t make it feel as though you’ve been split in two at your nethers?
After riding for what seemed like two hours, we stopped at a halfway point which turned out not to be a halfway point and let everyone (me) catch up. When I got there the guide person said in English, “Anyone who thinks they can’t go on, raise your hand.” About half the group suddenly turned to look at me, while the translator asked the Latvians the same question, and then the other half of the crowd looked at me.
I wrecked the bike.
I was driving along, going at a cruising speed, i.e. making gravity work for me, when I hit a root from a cedar tree. My bike immediately stopped, and once again that stupid first law of motion came into effect and I didn’t stop, and I slid over the front handlebars of my bike, then the bike started moving again and flipped over my shoulder, but I’m here to tell you I landed on my feet. I have a witness to that.
I got my blistered backside right back in the saddle and I kept going. I griped about it, but I kept going.
Lucas and Elizabeth, two of the church members here in Latvia, stayed right beside me as I struggled along, and never really let me quit. Through incredible patience and long-suffering, they allowed me to take tiny breaks, but they wouldn’t let me quit.
As we were pedaling down the “last two miles” which Lucas said every two miles after the halfway point, he looked at me and said, “There is opportunity for much spiritual wisdom here. This bike ride is like relationship with God. You must keep going. It’s okay to complain, but you must keep going.”
Sometimes I wonder who is ministering to who on this trip.

The sweetest words I’ve ever heard anyone say are “We are here.” We weren’t really there at all, in fact I think we probably pedaled another mile after that. But it gave me a second (or third…or fourth) wind when I so desperately needed it, and I finished “strong.”
When we arrived at the campsite, I drank more water than any one person ever has a right to. I was pretty disappointed at the fact that I was stone cold last, especially after I bragged to everyone that I wasn’t going to be last.
Then the announcement came. Two of our group members were lost, and no one knew where they were.
As people looked around worriedly, I said, “Oh, so I guess I wasn’t last after all. That’s cool.”
One of these days I’ll learn how to not say things.
The Latvians had gathered at an overlook on a river. 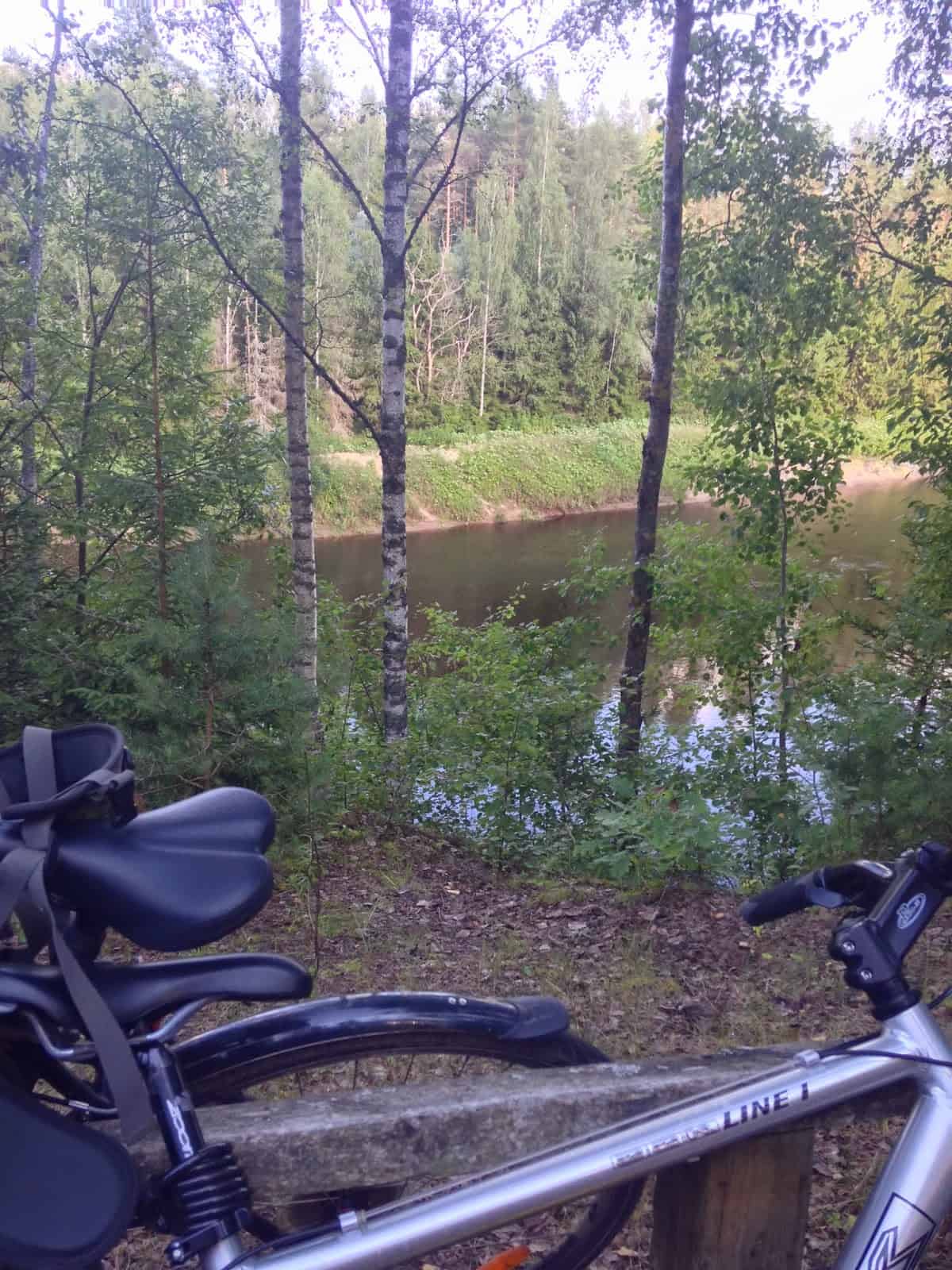 They built a fire, and because there were men present, meats were roasted on a stick over the fire. 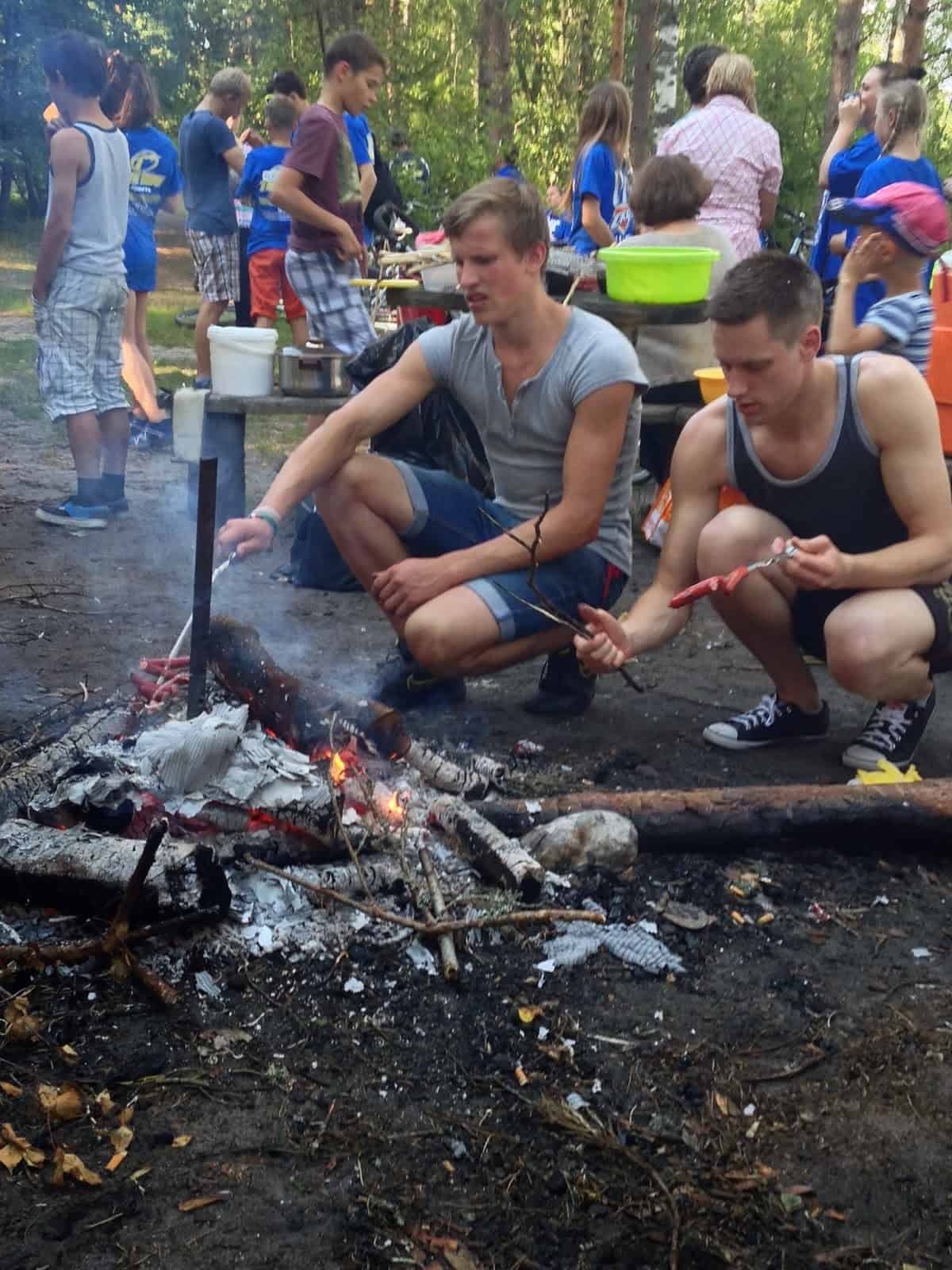 There was no way I was going to be able to eat sausages after that endurance test they called a trail ride, so I helped myself to some watermelon and some pickles and I looked for places to sit down then tried to sit down and realized I may never sit down ever again.
We all talked about the ride and prayed for our lost comrades and sure enough a few minutes later they showed up. I thanked both of them for obviously getting lost just so I wouldn’t feel bad about finished last, and they looked at me in such a way that suggested they wished  was the one who’d gotten lost.
Then, as I was trying to transfer my phone to Courtlyn (who is making me put her in this blog), it fell and the screen shattered, which is always the perfect way to cap off the evening. However, at least it still works, and I’m grateful for that, because without a way to communicate with my wife I might try to sneak home early.
All in all, I walked (limped) away with a great story to tell. Because I did finish that ride. And on the way, I got to see some ridiculously amazing creation, and learn more about the God who put it there through broken English and dogged determination.
Tomorrow we go to a couple of small villages to do the English and basketball camps. If I can get out of bed, I’m looking forward to it.