The Story of a Fall: A Tragedy told in Six Pictures. 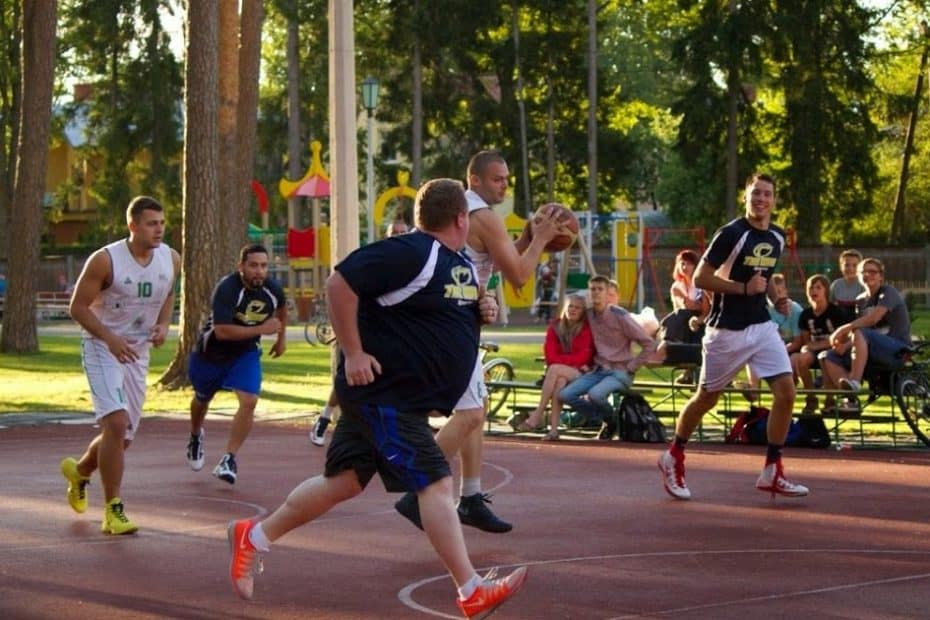 One of the facets of the mission trip we’re on is teaching kids basketball skills. I’m not helping with that, and maybe after this blog you’ll understand why.

As part of our visit, it was arranged for us to play a Latvian university team in a friendly game of international hoops. From what I understand, this can be a pretty important game to the Latvians because they enjoy beating the Americans in anything, and I mean, come on, who doesn’t?

I somehow coerced my way onto the American team, which I might add was full of actual college basketball players. They aren’t exactly 31-year-old ex-high school athletes with a protruding gut and an inability to make good physical decisions, in other words.

But I demanded my playing time, and then in what I can only describe as a coup, I got onto the starting rotation. To be fair, the kid whose spot I took is a Kentucky fan, and they don’t really have souls, so it’s okay.

I’m not going to lie to you folks, these Latvians were some big dudes. Three or four of them were at least 6’9″, and they all had meat on their bones. Big, muscly meat.

And then the tip happened, and we start our journey into what has turned out to be one of the most disappointing ways I’ve ever represented our sweet, sweet land of liberty. 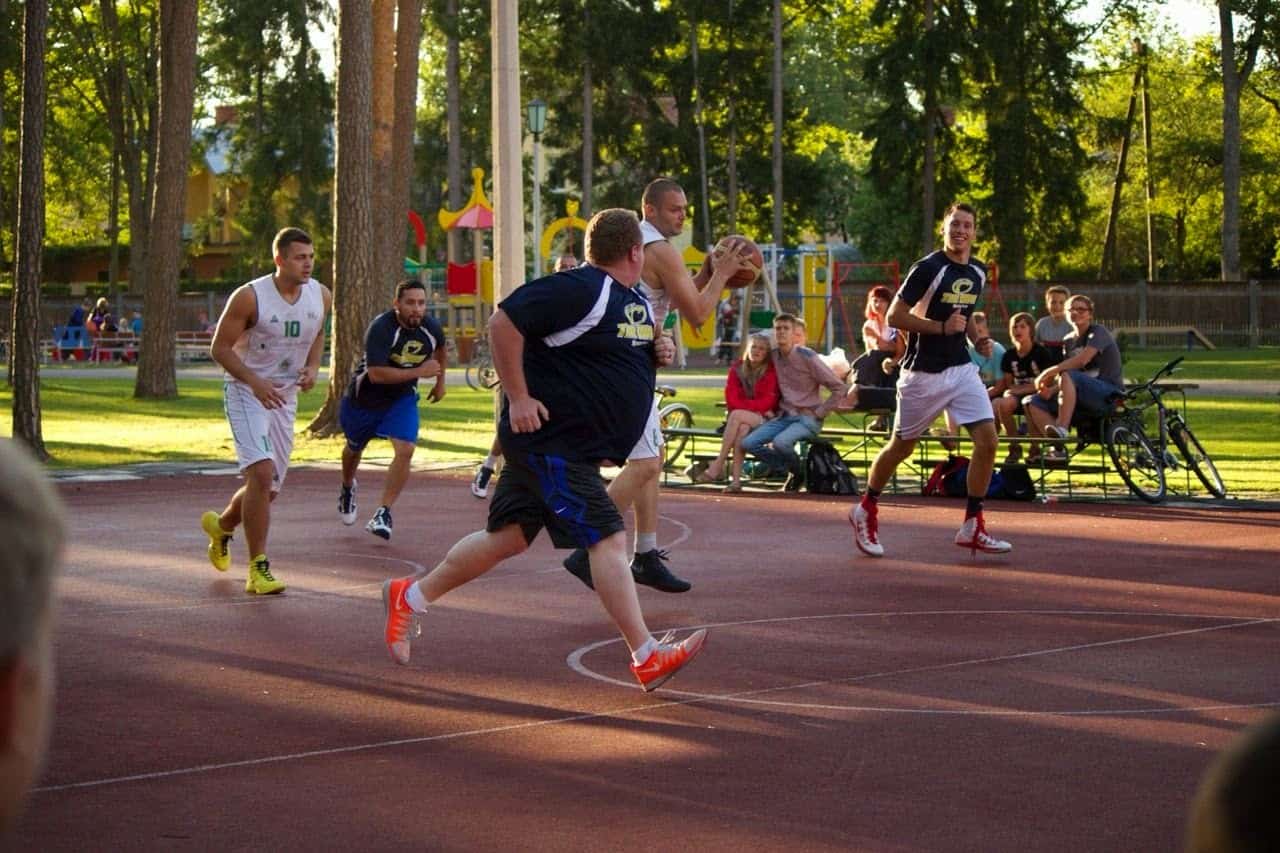 What the viewer should observe here is honestly how good I look. The shirt fits well and is black, so it’s slimming, and I basically look every bit the part of an American hero on the court. Traveling down the body we see Duke shorts, so I’m representing the only college team that matters. Further down we see muscular calf muscles, toned and taut from walking 758.9 miles a day on this mission trip.
Further down is where the problem is. The shoes I’m wearing are low tops. Just out of this frame are a pair of basketball sneakers I brought and an ankle brace, neither of which I gave any thought to whilst plotting to be a starter. This will cause me a significant amount of embarrassment in about three seconds, because after the gentleman caught the ball, he shook me harder than an Oklahoma earthquake.
I just want you to take every opportunity to see how good I look before you see this next picture.
Frame Two 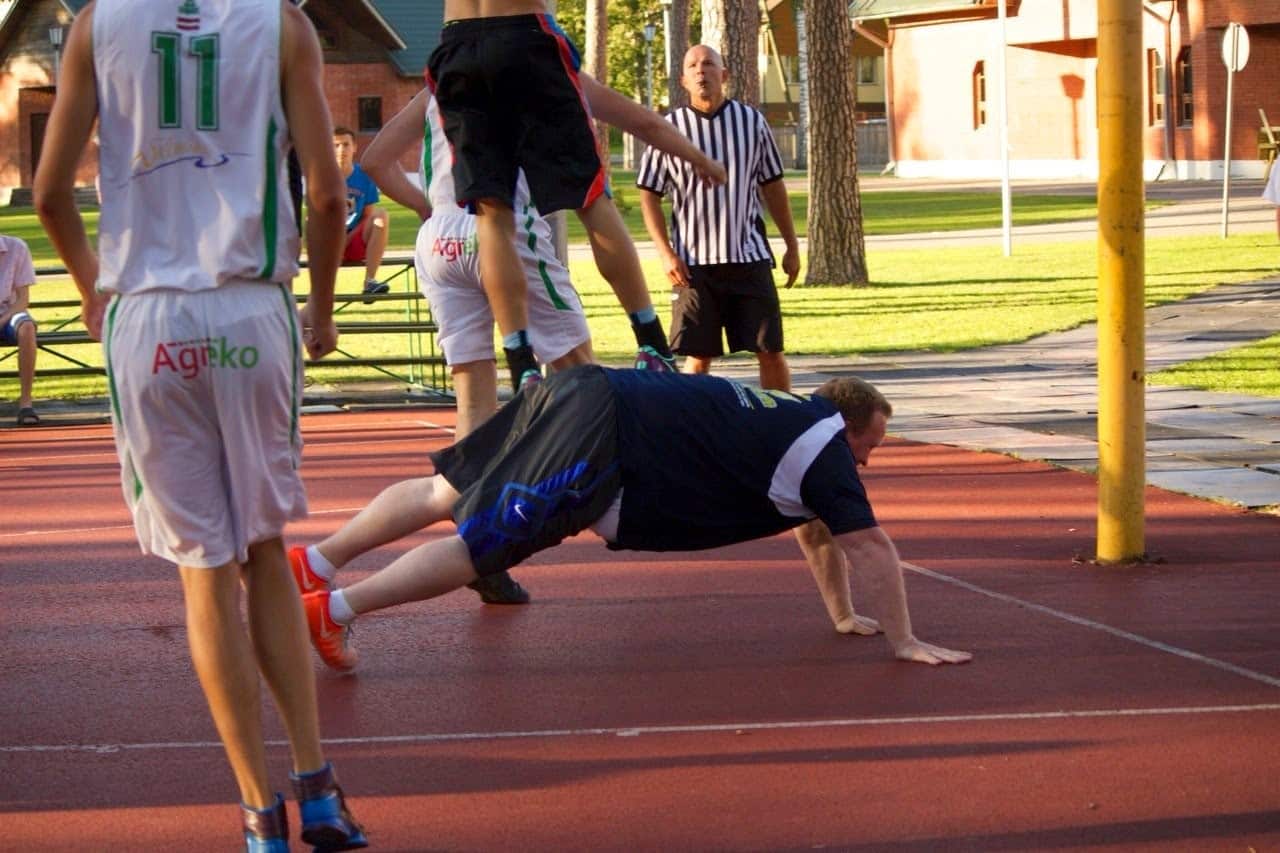 I know what this looks like.
You’re thinking, “Oh, Travis decided to do some push ups on the court to get good and loose for the next drive. Well, I hate to shatter any previous misconceptions you might have, but this is unfortunately what I look like when I’ve taken two quick backwards shuffle steps to stay in front of a giant Latvian, gotten turned around on accident, tripped, and am in mid-fall.
I’d like to tell you all that this is as far as it got, that I was able to stop myself here, get back up, and make a good hustle play in the end. But unfortunately I can’t.
But I would like to say that as far as push up form goes, if I was doing a push up, that is absolutely perfect, spot on form.
Frame Three 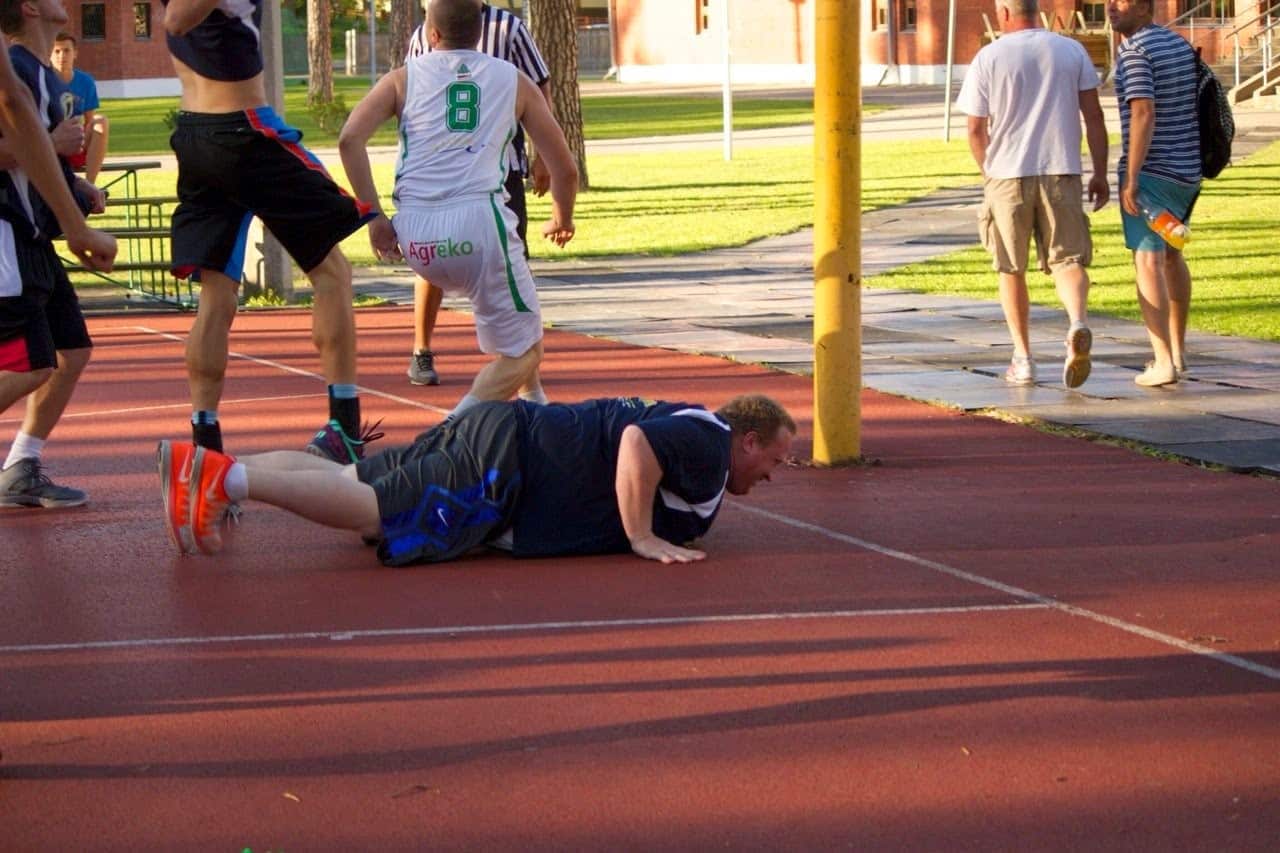 Right. We’re at the bottom of the push up here, only it’s not a push up. You know the air conditioner slogan “It’s hard to stop a Trane?” Well, yeah. That applies to Travis too. You can see the cause for my condition, number 8, continuing to play as if I’m not in the middle of what will eventually earn the nickname of “Scorpioning,” and my teammate with the midriff showing is desperately trying to pull down a board without stepping on my kidney. God bless him for that.
Again, in still motion, this form looks incredible. Like I do nothing but push ups all day every day. The gentleman in the striped shirt is looking back wondering what happened, but you’ll notice a complete lack of concern on his face. I’d think that in Latvia, a fat white man falling would cause a little more concern for the integrity of the playing surface, but obviously no.
Now it gets bad.
Frame Four 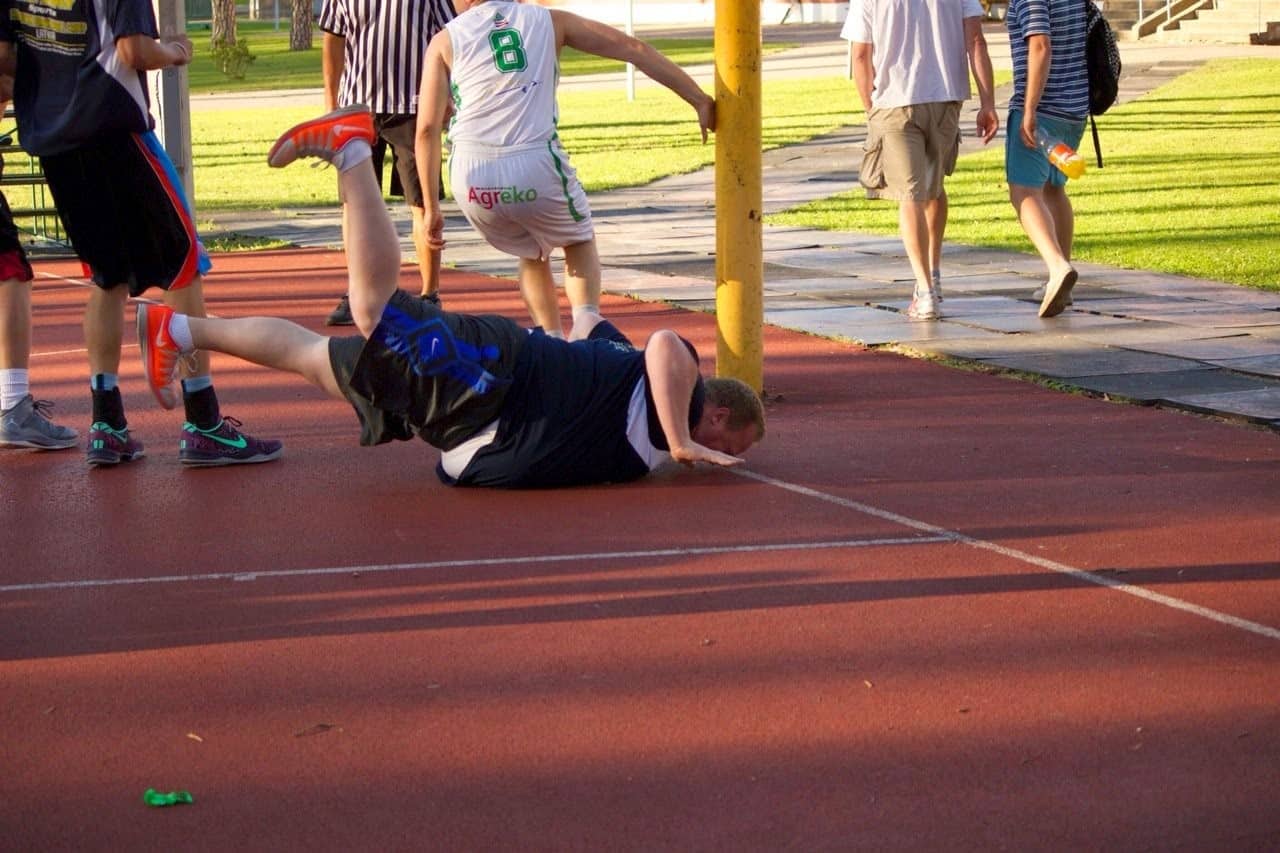 Go ahead. Finish laughing then come back.
Done? Okay.
Let me tell you something about a synthetic rubber basketball floor and friction. They are like fire and gasoline. In essence, I’m a 340 pound match. On a normal wooden basketball floor, you slide. Your jersey is soft, the floor is somewhat slick and smooth, and in a situation like this you glide towards the wall, get up, dust your self off, and no one thinks anything of it. That’s the American way.
But not this court. Not this country.
Here, you hit the ground in a perfect push up and then when you expect to slide, you stop completely, and your legs, which are somewhat short and white and not hairy, start to rise up from the ground, all because some douche named Albert Einstein decided that something in motion should stay in motion, and then named it physics. So if there’s really anyone to blame for this, it’s this Latvian number 8 guy, Einstein, and physics. Also the floor.
And sadly, it’s not over.
Frame Five 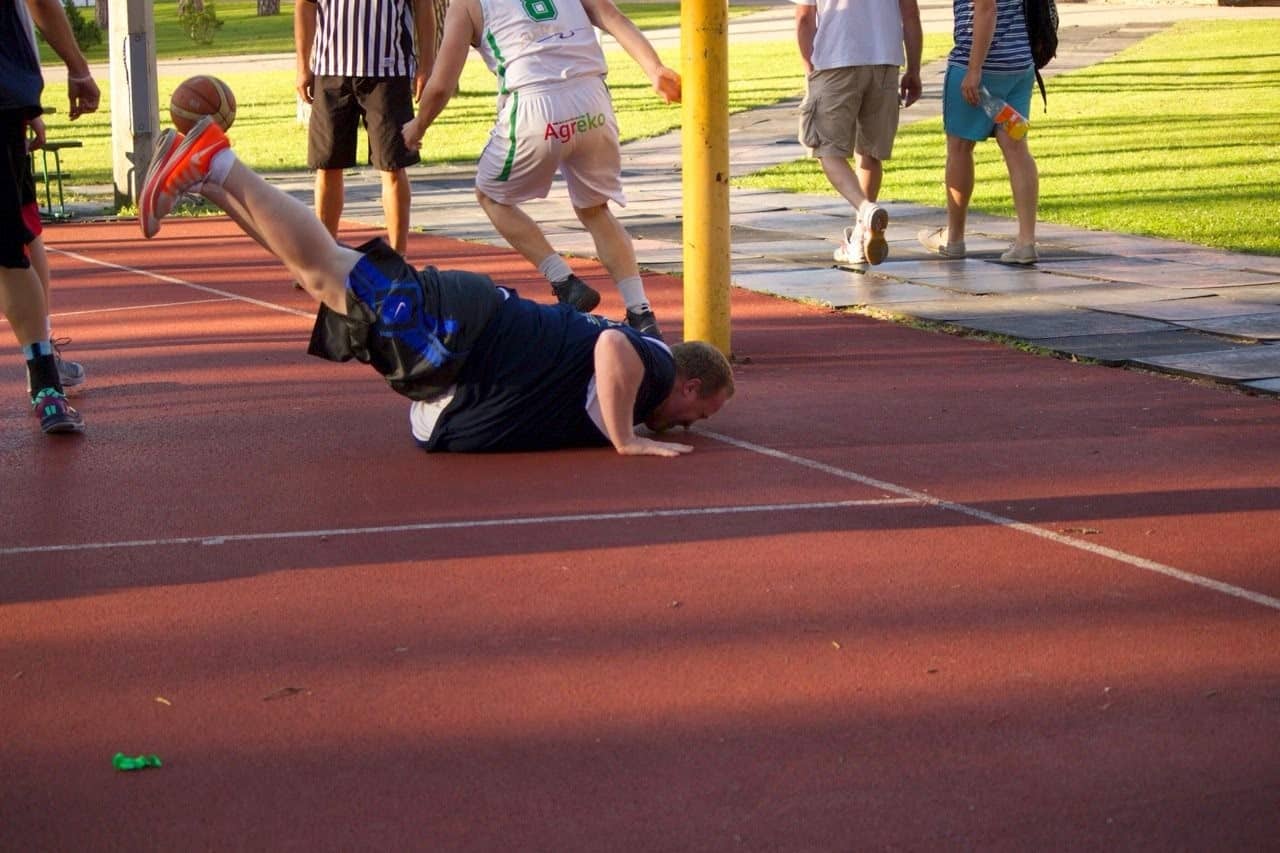 And here it is. The “Scorpion.”
My legs are completely over everything else I own, my chin is currently pulling rubber chips off the court, and I look like a giant seesaw.
I can’t exactly tell you what was going through my mind at this point, but I think it was probably the court. Some people have said it looked like I was doing my best worm dance. Again, notice the complete disregard by number 8 for having put me in this little incident and causing the old U.S. of A. a serious dip in jingoistic pride.
I hurt so bad right now typing this up. It’s been 20 hours and I feel like I’ve been in a car wreck followed by some really bad yoga positions. My knee has invented an entirely new term for swollen, and my back is tighter than the jean shorts Seth tried to wear on the first day. I’m hurt real bad guys.
But. Here’s a lesson for you young folks. Frame Six is about picking yourself back up. Frame Six is about dedication, heart, moxie, determination, grit, and the dogged American spirit. Frame Six is “We will not go quietly into the night! We will not vanish without a fight!” Frame Six is the essence of never say quit. Frame Six is Rudy, Rocky, Hoosiers, and Michael Jordan in Space Jam when it looked like the monsters were going to enslave him at their little amusement park.
Frame Six 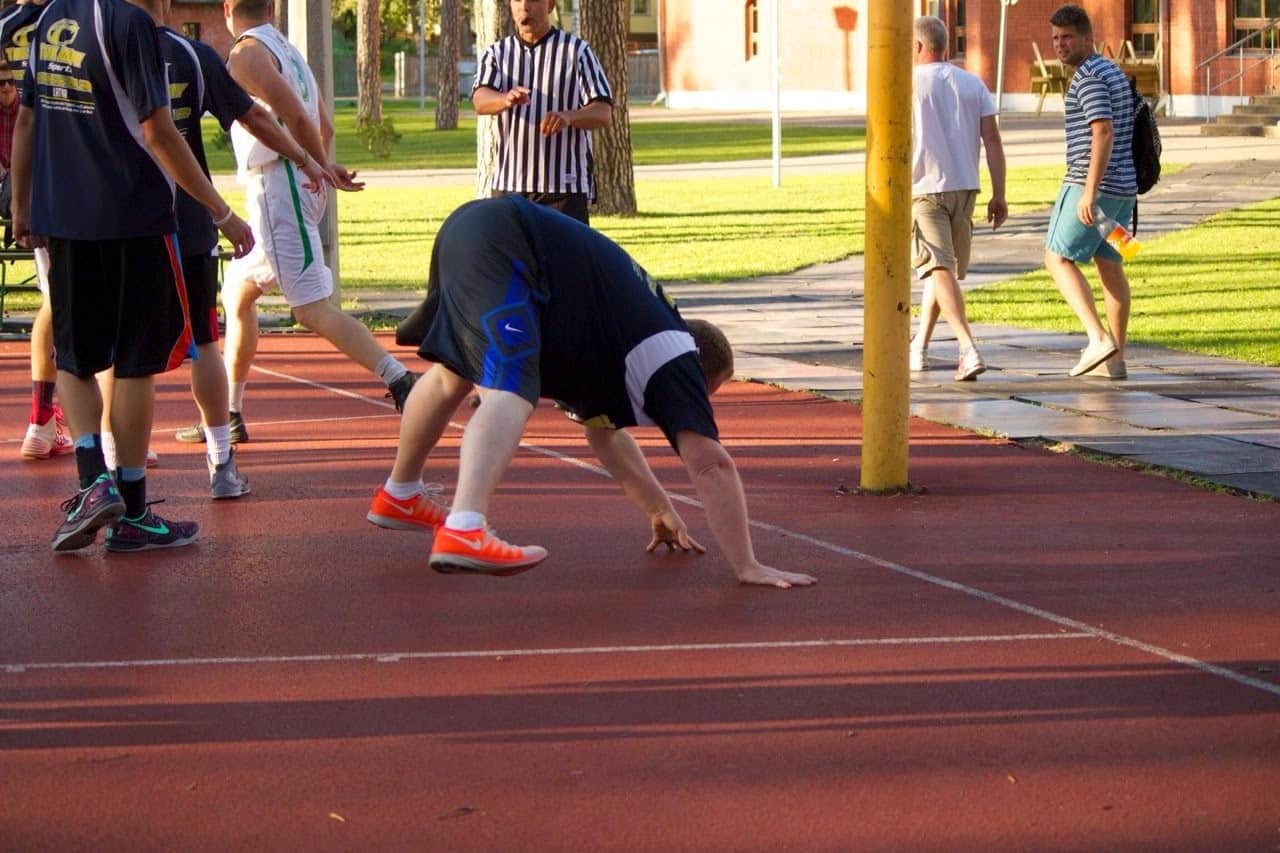 That’s what perseverance looks like. That’s the American way all summed up in one glorious shot of a man’s incredibly well developed backside. That’s what you young people need to learn about, and I think I showed a lot of Latvians how resilient Americans are by hopping on the struggle bus called getting back on my feet.
I’m sorry about the fall, America. But I’ll never quit. And one day I’ll reach the top. 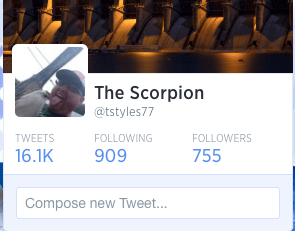 Here’s a gif of the experience for those of you who’d like to see it.

All photography credit once again goes to Nick Luttrull, who is brilliant behind a camera, but I think maybe could have passed up the opportunity to take this many pictures of my worst international basketball performance ever.