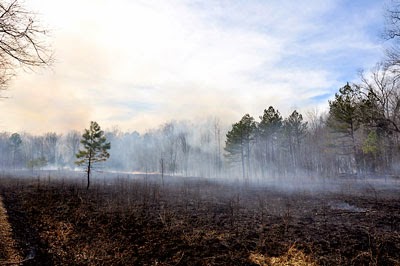 “That’s why they do it. They like to set the fire then stand back and watch it.”


***
I’m pretty lucky to have the job that I have. As a reporter, I get to see some pretty neat things. I also get to see the worst in people, which can sometimes be emotionally draining. About a month ago, I had the opportunity to see a little of both of those things, and it taught me a very valuable lesson about the things I’ve been struggling with in my life.
The call came over the scanner close to dusk.
“There’s a grass fire, we have a structure in danger, here are the coordinates.”
I grabbed my notebook and my camera, and headed out the door. After circling the smoke for what seemed like forever, I finally found the fire.
There were quite a few firefighters out, and since the fire had been set in numerous places, they were having difficulty getting enough people to extinguish the encroaching flames.
After talking with someone in charge about the structure in danger, I sat back to keep an eye on things for a bit to make sure they didn’t get any worse. I even took advantage of the setting sun to get a pretty good selfie.

About ten minutes into my fire watch, a local fire chief pulled up next to me and said, “Hey we have to go check out another fire, you want to ride with me?”

He offered me a ride in a fire truck.

“YES SIR PLEASE LET ME GET MY CAMERA CAN I HAVE CHOCOLATE MILK BEFORE BED I’M JUST SO EXCITED CAN I PEE FIRST?”

I got to ride in a fire truck!

I sent my boss a text that explained what I was doing, and off we went, lights blazing.

Unfortunately, the trip didn’t produce anything more exciting than a ride in a firetruck, and we drove back to the conflagration in progress just as the sun was giving its last few rays to illuminate the scene.

As darkness fell, the burning grass and smoldering trees took on a completely different hue. They weren’t red, and they weren’t orange. As the breeze shifted and picked up, it whistled through the destruction and turned things an entirely new color, one I’d never seen before, and one I have no name for.

The camera I had wasn’t good enough to capture the moment, so I have no picture to offer. My only hope is that you’ve witnessed the color I’m talking about, because, well, it was. . .beautiful.

“That’s why they do it. They like to set the fire then stand back and watch it.”

It all came together for me in that instant. The Lord showed me something very powerful. Those who are regular readers of this blog or who know me intimately in person know that I’m struggling with several things. I’m trying to make my marriage better, I’m trying eat healthier, and I have a multitude of other daily battles.
I win some, and I lose some.
In that moment of extreme beauty and destruction, it occurred to me that some of the things I deal with seem just as enticing when looked upon from a safe distance. They smolder as they are fanned by the wind of my struggle, and they have a bewitching quality, even as they are destroying my life.
I think sin can appear appealing when viewed from a “safe” distance. So we do it. We set the fire and stand back to watch. But after a season of alluring annihilation, we’re left with nothing but the charred remains of what was once something healthy and alive.
Then I thought a moment longer, and realized that even in that burned desolation, new life was beginning to take place. Before the end of the summer, the pasture that was burned will start growing new grass, new trees, and new flowers. In a few years, all traces of the fire will more than likely be gone.
The Lord does the same for us. He sweeps through the blistered remains of the fires we set and rescues us, forgives us, then begins to plant new life in us. That, to me, is grace. Grace greater than all my sin. Green, newly budding, and full of potential, even in the wake of my own calcine intentions.
So if God can create new life in my self-destruction, what more can He create in fields I don’t torch at all? How much more useful are the green areas in my life have than those blackened by insistent sin?

That is the question I’ve asked myself a lot the past few weeks, and it’s something I’ve dedicated time to work on. Making my wife happier, making my kids stronger, and giving up things I once considered beautiful, but ultimately left me empty and cauterized.
What fires are you setting in your life? What are the singed areas of intentional sin that you struggle with? Can you stop before you flick the match? I think you can, and I think I can too. Let’s work on that this week. Let’s all stay green and healthy, and let God work with unblemished grassland instead of salvaging the remains.