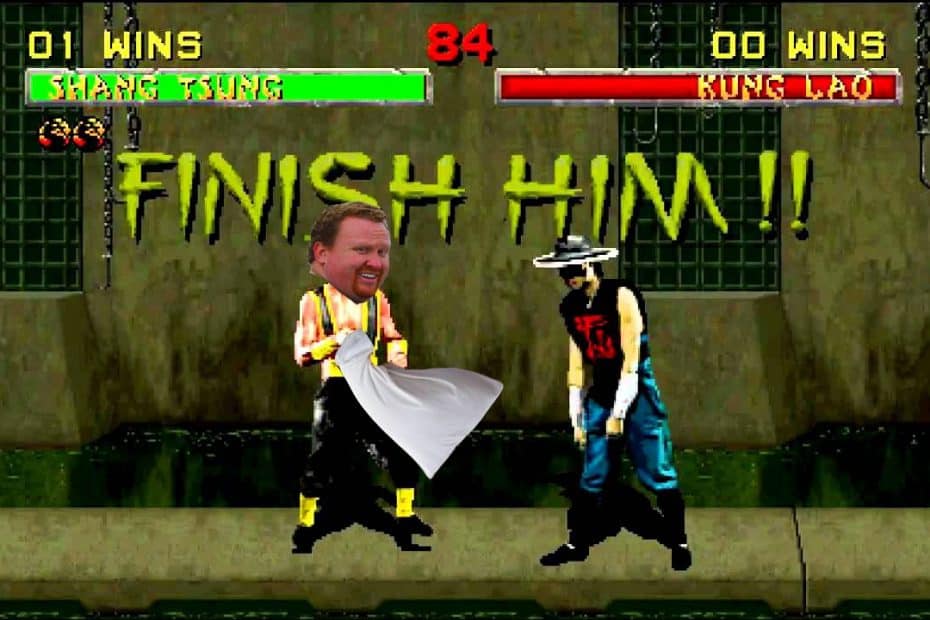 I used to be a pretty puny kid.

In the sixth grade I’d already hit 5’6″, and I weighed right around 95 pounds. I was a stick. It was not a healthy, cut up, lean physique, either. I was a measly little sixth grader who got tossed around like a rag doll by bullies.

Weaknesses aside, I did have a talent of sorts. I was really good at pillow fighting. Years of church camps and practicing moves on my younger brothers had given me a keen eye, fast reflexes, and a finishing move that rivaled anything the creators of Mortal Kombat could have dreamed up.

Seventh grade wasn’t much better for me (some of you read my Twitter story about the first time I got slapped), but I did start putting on a little bit of weight.

As a seventh grader I wasn’t supposed to go to Kiamichi (the church camp for third through sixth graders), but because my parents were sponsors, I had to go. They couldn’t exactly leave me alone at the house for a week.
Naturally, being one of the oldest kids there, I took charge of the dorm in much the same way the Aryan Brotherhood takes control of a prison, only I wasn’t racist. I established my rule with violence, unfairness, and a general sort of all encompassing control.
One of my first orders of business was to establish the first annual Kiamichi Invitational Pillow Fight Tournament. And, as the founder of the tournament, I gave myself the top seed. I would preside over the tournament like Shao Kahn, and I would fight the winner.
I have to say, even though the tournament was immediately and forever banned from Kiamichi, it was the best pillow fight tournament ever fought on those hallowed grounds. Young men battled and fought their way to the top, leaving their battered victims muttering excuses to the adults like “Oh, I slipped and fell on a rock.”
The first rule of Pillow Fight Club is you don’t talk about Pillow Fight Club y’all.
And at last we had a winner, Tommy.*
Tommy was a scrapper, a measly sixth grade kid who may or may not have won his matches by incorporating biting into his pillow fights. All’s fair in love and pillow fights though, am I right?
So it had come down to this.
A crowd gathered around like a playground fight, the better to shield what was taking place from the prying eyes of well-meaning but ultimately overbearing adults who would rid us of our fun if they caught us.

It was a pillow fight for the ages. Tommy did try to bite, but I fended him off. I was spinning and ducking and dodging blows and teeth like a Shaolin monk, and I was pulling off some spectacular combo moves that left poor Tommy reeling.

Finally I did it. I landed a series of spinning roundhouse hits that put Tommy against the wall. After I was done he looked like this:

So I moved in for my patented “finish him” move. Fatality style.
Now, I’ve told you all of this to tell you another crucial part of the story. If you’re desperate for the end bit, go ahead and skip this, but it won’t make much sense without it.
If any of you have ever been to church camp, you understand the importance of “packing light.” I think what this actually means is to pack as little as you possibly can, but in reality how people take it is to cram as much stuff as you can into the least amount of space taking luggage.
Being the industrious young man I was, I had taken the liberty of saving some space in my luggage by packing about four pairs of Wrangler jeans in another vessel.
Yep.
In my pillow case.
To be completely honest, and I mean this guys, I swear, I had forgotten that I’d put the jeans in there. I really did. I would never have tried to win the Kiamichi Invitational with subversion and ill-begotten tactics, I was no biting Tommy after all.
Alright, back to Tommy, poor, wobbled Tommy, up against the ropes, and me coming in for the fatality.
I spun, ducked, and exploded up onto my toes, so I could bring every ounce of body weight I had into the blow. I brought the pillow up swiftly with a flick of the wrists (it’s all in the wrists guys), and I made solid contact with Tommy’s jaw.
Since we were poor growing up, I had a rock hard pillow anyway. I also had a homemade pillow case that was stitched together by my mother and would have held 1,000 pounds without coming apart. Now if you add those things together plus the fact that I had four pairs of hard as a rock denim packed in there, you get a pretty staggering result when you force uppercut someone on the jaw with it.

It wasn’t that bad.
But it did knock Tommy partly unconscious and wound up getting me into a world of trouble with a couple of sponsors who just happened to be my parents.
And thus ended two things: my reign over the boys dorm at Kiamichi, and the Kiamichi Invitational Pillow Fight Tournament.
* Tommy’s name has been changed to protect his privacy mostly because I’m friends with him on Facebook.