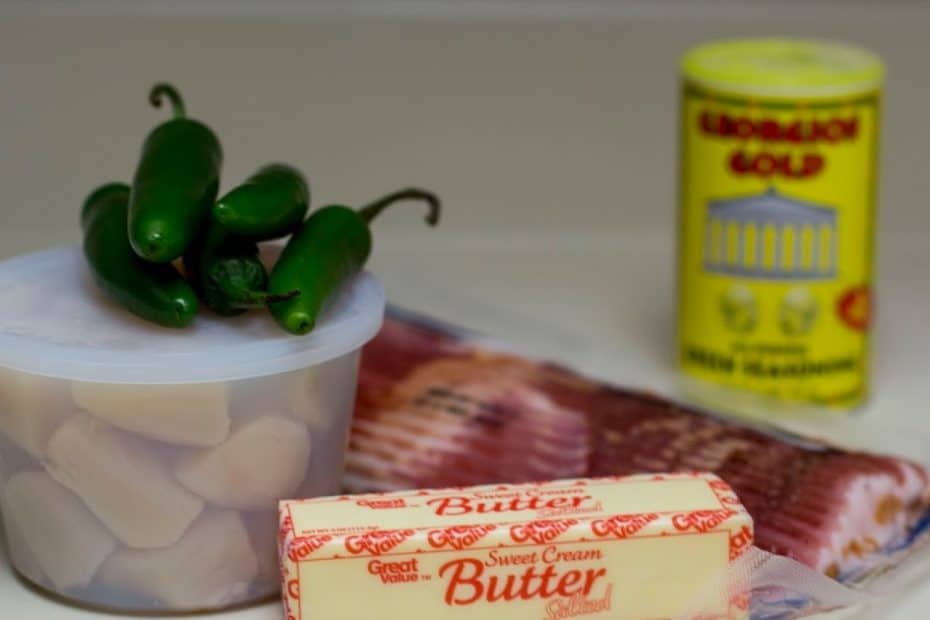 We’re currently on vacation in sunny Destin, Florida. Aside from the fact that Drake literally just took a dump on the bathroom floor, things are going pretty good.

The water was pretty rough today, not red flag rough, but too rough to take the boys down, who are too brave for their own good. I got super bored, and after we visited the Gulfarium, which is friggin amazing, we stopped at a seafood shop and got some shrimp and scallops, which are just about my favorite seafood in the world.

Before I started cooking, I thought, “Why not do a food blog?” And since no one around me said, “Hey man, that’s a bad idea,” I went for it.

So here you go: Bacon-wrapped sea scallops with serrano peppers and a butter glaze. 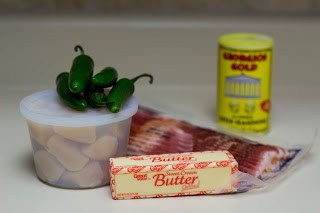 Here you see my ingredients, those sweet, sweet scallops, a few serrano peppers, some Great Value butter and bacon (shut up, we’re poor, we spent all our money on the condo), and some Greek seasoning we brought from home. 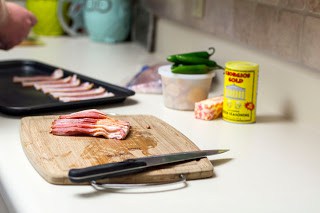 Next step, cut the bacon in half, then line those fatty pork belly slices up on a sheet tray. You have to par-bake them, get them sizzling, otherwise you wind up with raw bacon and scallops drier than a British comedy. I baked the bacon slices for 7 minutes at 350 degrees. 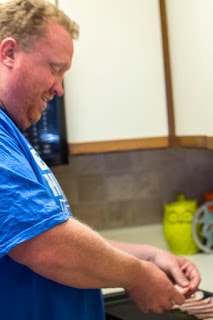 This is me laying bacon on the sheet tray, I’m smiling because bacon, obviously. Anytime I touch the stuff it excites me in a way that my wife normally excites me, if you’re picking up what I’m putting down (bacon). 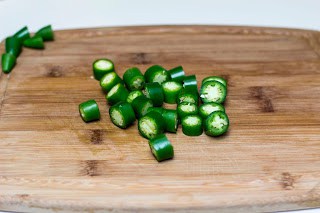 Next I cut up the serrano peppers. I suppose you could use a milder pepper like a jalapeño, and let me know if you decide to do that, I’ll get you a skirt while I’m down here and mail it to you. I wanted habaneros, but the ones I brought with us were ruined, and Alicia couldn’t find any at Walmart down here. I cut them in about half inch slices. 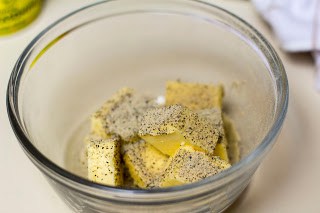 Next I cubed up the butter, then threw the Greek seasoning on top and tossed it in the microwave, and I’m including this picture just because it’s amazing. Look at the detail. If I can’t make it as a food blogger, I can definitely make it as a professional butter photographer, and don’t tell me that’s not a thing, because just look at that butter. Look at it. Oh and microwave that until it’s melted, if you need a time, you’re an idiot. 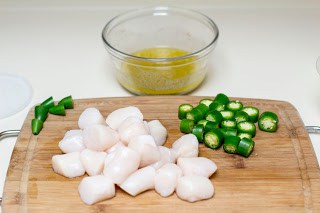 Now we’re cooking with peanut oil. Here are the scallops, I rinsed them off, and they are freaking gorgeous. Just pearly white cylinders of sweet, tender oceanic goodness. If I could pull these things out of Fort Gibson Lake, I’d never eat anything again. I pulled the bacon out of the oven next, got too excited about it to take a picture. 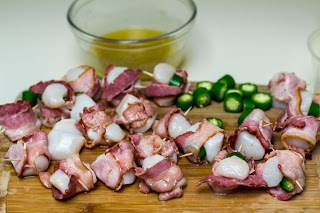 Here’s the assembled product. I just took a serrano, put it on the scallop, then wrapped the whole thing with bacon and secured it with a toothpick. Might want to soak those toothpicks in water first, but other than that, this is what they look like when they’re done. I had three scallops left with no bacon on them, if it was any other food that’d be a shame, but these are scallops. I just tossed them on the sheet tray. I also didn’t take the bacon grease off the sheet tray, because, well, if you need to do that, just throw all this stuff away and go get a vegan burger. 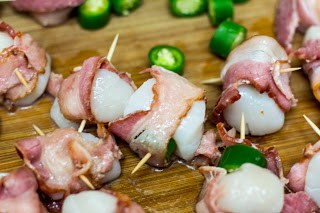 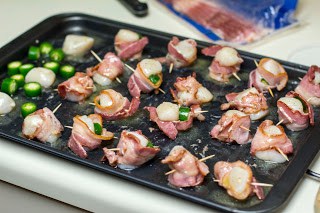 Here are a couple of detail shots, first on the cutting board and then on the sheet tray loaded up with bacon grease. I threw the peppers on there too, figured they couldn’t hurt. I basted everything with the butter mixture, but kept about half of it back for after cooking. I kept the oven at 350 degrees, and I baked them for 15 minutes. Now, when they got done, the bacon was still a little soft for my tastes, so I cranked the heat up to 425 degrees for about 5 minutes or so. After cooking, I glazed them with the butter again because scallops are naturally a healthy food and I needed to do everything I possibly could to make them bad for me. In the end, the bacon was still a little soft, but I couldn’t wait anymore because, well, look at them:

Here’s the finished product, all plated up and ready to eat. These things pair well with whatever it is in that glass, my wife picked it out, all I know is it’s a white. To be honest, these would pair well with raccoon urine, and if you try that, let me know how it is. The heat level was perfect, the scallops were cooked through just right, and aside from being a little soft, the bacon was sublime. We ate on the patio while the kids had hot dogs and Velveeta shells and cheese because scallops are “gross” and “nasty.”

When it’s all said and done, it’s safe to say that if you set one of these scallops on top of your head, your tongue would beat your brains out trying to get to them. I ate every single one on that plate, and sat there and stared at my wife’s (she didn’t have peppers on hers) until she finally looked at me and told me to go eat a hot dog. 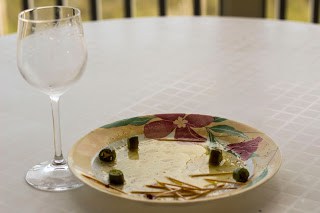 Before anyone gives me crap, those are leftover peppers, I didn’t pick them off. So that’s it, I’m a food blogger now, if anyone wants to get in touch with Food Network on the Pioneer Woman, that’d be great. Now we’ve got to go down to the beach and hunt for crabs and try not to lose a kid in the high tide. Wish us luck.