Here we go though, in no particular order, five of my deepest fears.

One day I’ll wake up and none of this will be real — I’ve worked hard to get where I am today, and I’ve been extremely blessed by God to get here as well. I am scared to death that none of it is real. This life, my wife, kids, my job, my degree, my moderate level of success, my family…none of it exists, I’m in some sort of fugue state, or, even worse, I was mentally incapacitated many years ago, and I’ve created my environment. I won’t go so far as to say I’m scared I’m in “The Matrix” or anything that unrealistic, but I am terrified that nothing I have is real.

That I’ll outlive my wife, my kids, or my brothers — No one wants to outlive their kids, I understand that. However, I’m petrified of outliving my wife or my brothers as well. I do not want to grieve the loss of any of these people. If something happened to Alicia, it would mean that I’d be responsible for not only me, but for three children. It would also mean that half of me—half of my identity, half of my sanity, half of my soul—would be missing. I have no idea how I’d cope. I watched my mom grieve for my dad, and I want no part of it. And in that same vein, I want to be the first to die of my brothers. I don’t want to go through what my dad did, watching two of his brothers die before he did. When I really sit down and explore this, it boils down to selfishness, and I won’t deny that I am a selfish person. 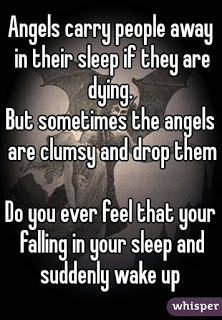 That I’ll die in my sleep — I don’t want to die in my sleep. I want to go out guns blazing, or pushing a kid out of the way of a speeding bus, or saving one of my students from something evil. I want to give my life for someone else. I don’t want to go peacefully in the night, and have my family discover my cold body the next morning. I want to see it coming. I want to stare into the gun barrel, the fire, or the headlights and make a final stand, say something incredibly cool, and go meet my Savior. Dying in my sleep sounds like such a cop out. I have no idea why this is a fear of mine. No idea. But it is. 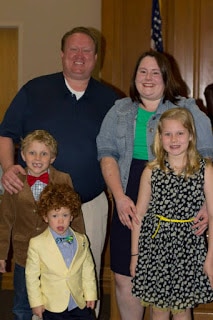 I’m scared of raising children who will one day return to their biological parents — When my children turn eighteen, they’ll be legal adults who are allowed to live their own lives. Since we’ve adopted them, and since they have biological parents who are still alive, one day they’ll be faced with a choice of whether or not they want to see them again, and then if that meeting goes well, they’ll want to move in, or back to that town, or see them more and more. I’m so scared of sinking fifteen years of parenting and love into a child only to hear them say, “I’m moving out,” and watch them walk away, knowing there is nothing I can do to stop them. This is something I pray about. This is something that sticks in the back of my head, and I’m sure Alicia thinks about it as well. It’s one of the downsides to adopting, and there’s nothing I can do about it. I think that’s what bothers me the most, is that I’m not in control. I hate not being in control. Kids, if you’re reading this before I get to show it to you, just know that I will never keep you from your bio parents, and I love you.

Canned biscuits — We’ve gone pretty deep in my psyche here, and I think I need to lighten the mood, so I’m giving you a genuine fear of mine that is genuinely ridiculous. I hate opening biscuits. I cannot press a spoon into the seam because the pop scares me. I’m scared to even peel the wrapping paper off of them because I think it’s going to pop prematurely. When I peel the wrapper, I throw the can on the counter to pop it open, because then I’m in control of what happens. I also hate popping balloons, and will leave a room if too many of them are being popped. I hate things like that, they scare me, and I don’t do being scared. It’s why I don’t do horror movies. Jump cuts make my heart skip.