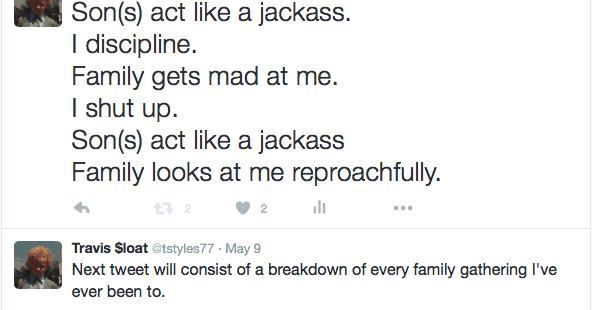 Let’s be real for a second. As an adoptive parent, I have a problem. It’s a problem that stems from my selfishness and pride, both of which can spiral out of control very quickly in my life.

I don’t need your kind words and panegyrical speeches about how awesome we are for adopting kids. I really don’t. I still don’t think we did an amazing thing, I think we did what any human being on earth would do, we saw some kids who needed a home, and we gave them one.

By the way, I’m getting all the stuff that makes me look like a douchebag out of the way early, so if you want to scroll a bit you can. I’ll understand.

For whatever reason, though I don’t want your edification of our character, I do expect our children to be grateful.

See the problem yet? Again, the offer to skip forward still stands.

I feel like my wife and I (who I am absolutely not speaking for here) pulled these kids out of a situation where their lives could have taken a much different turn. Some of the birth family reads this blog regularly (Hi guys!) and I’m not out to skewer them about how the kids’ lives would have turned out. For all I know, they might have changed their lives around and raised better children than I could ever dream of.

So the kids should be grateful. No, I don’t expect kissing of rings or regular shoe shines from them, but maybe stop the entitled behavior a bit, yeah?

The other day Aven decided he didn’t want to live here anymore. Said it was awful. He wished he lived somewhere else.

So I told him anytime he was ready to leave I’d help him pack. I was pissed. I was offended. I’ve also never parented an eight-year-old boy before, so cut me a little slack.

Fast forward a couple of weeks. Aven had a real bad day at Drake’s birthday party on Sunday. Drake got Legos, and Aven got pissed because he thinks he should have all the Legos in the house, and he threw a fit then gave everyone the silent treatment, and basically took all the attention away from Drake on his big day.

For his behavior, he earned some alone time in his room, along with the promise that when the family left, he’d be getting his rear end lit up.

For an explanation of why I was waiting until family left, see the following tweets: 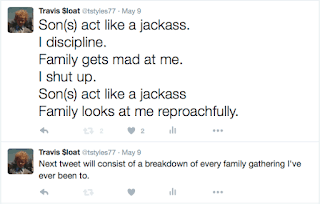 Well, eventually the party died down and I went into Aven’s room with the paddle. I had planned on doing a bit of yelling, a bit of paddling, and ending in a lecture about his choices.

I told him to sit down, and I explained what was about to happen. I told him that he had made some real bad choices today, and that he was now going to pay the consequences for his actions. I told him he had options when he got mad. I explained that one of those options was walking away. I explained that another option was some alone time in his room if he wanted. I made sure to reinforce that these were his choices, and no one could make them for him.

I then told him he was to go apologize to his mom and his brother, and then he was coming back to get his spanking.

He walked back in to the room, and I told him that he could get mad about the punishment, but my dad busted my butt and that’s why he was getting his butt busted.

And just like that, words stopped coming out of my mouth, because a very shocking thought crossed my brain.

The revelation floored me, and I’m sure I seemed a sight to Aven as I stood there holding the paddle while being unable to communicate.

I heard a voice in my head. It wasn’t Brian Sloat. To tell you the truth, I absolutely know it was the Holy Spirit, giving me a direct order that I wasn’t ready to accept.

“Pray with your son.”

Eventually I put the paddle down. I sat down on Aven’s bed and I told him to stand in front of me. I looked at the wall for a while, then at the giant Superman on the wall. Then I looked at the dresser, the whole time trying to find words that adequately suited the situation, and that would affirm to my son that I had not gone completely bat-shit crazy.

I finally looked him in the eye.

The tears fell. Through blurry eyes I watched as everything in his countenance changed, his features softened from anger to what could almost be called remorse, and then tears fell from his eyes too.

It was one of those classic father/son hugs you see in the movies. The whole tears staining the shirt, me gripping the back of his head like a man desperately trying to keep a hydroplaning car on the road type hug. If you had been in that room, you’d have cried, trust me. Nicholas Sparks in all his writing glory could not have manufactured a better hug than that one.

Eventually the crying stopped, and I looked at him again.

“Son, if anything ever happened to you, I would never be the same. You are wanted. You are special. I love you so much, and I know it seems like I’m mean to you sometimes. I’ve never had a son before. I don’t always know how to be a good dad.”

And then we prayed.

“God, help me have a better attitude, and help me not be jealous, and make better decisions, amen.”

May 15, 2016 will mark the second time ever that I have prayed with my son. The first was his salvation. I am an absolute idiot for not doing it more. I should be praying with all my kids. I’m going to try and make that happen.

As for Aven, well, there will be more bad decisions. He’s eight, after all, soon to be nine. He’s got a whole lifetime of bad decisions ahead of him. Just like his dad.

Alicia walked in the house yesterday and said, “I don’t know what you said to him yesterday, but he’s been amazing today.”

I guess sometimes sparing the rod is necessary. I guess ultimately, that’s what Christ did on the cross. I deserved a beating, and instead I got told that I was loved, that I was special.

I’m a horrible father. Nothing you can ever say to me will change my mind about that. But I love my kids, and Christ loves me, and that’ll work just fine. And in the meantime, I’ll be busy reminding myself that although Brian Sloat was a brilliant father, he doesn’t need to be the one who parents Aven Sloat.