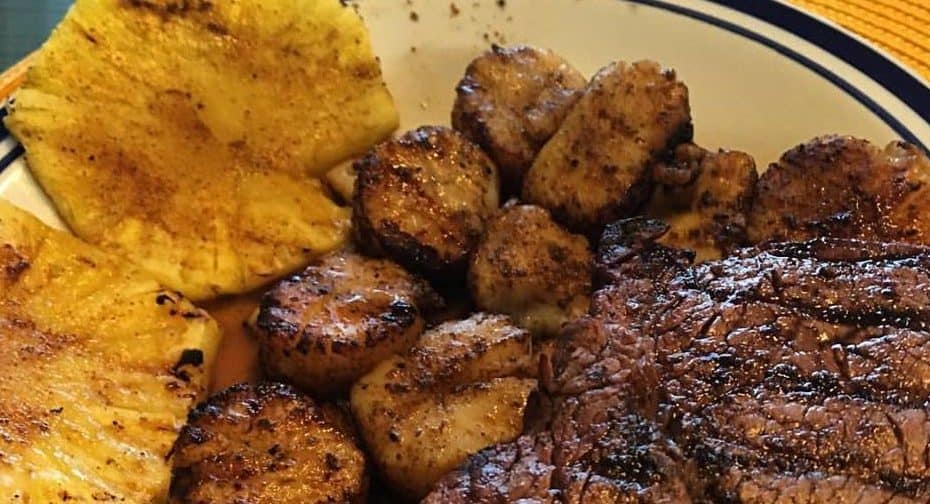 My family and I are, as you probably know after being inundated by social media posts all week, in Navarre Beach, Florida, on vacation.

Things are great, thank you for asking. We’ve minimized the fighting, I’ve only had to beat one child since we’ve been here, and last night I had this for dinner, so yeah.

There’s really only been one problem.

Saturday when we pulled up, the water was fine. We didn’t go near it, of course, because after I’ve driven fourteen hours through Alabama traffic, the last thing I want to do is drag children to the beach.

As an aside, Alabama is the actual worst. Second only to Arizona in states I hate.

I don’t know if you’re familiar with the beach flag system in Florida, so I’ve included a pic. 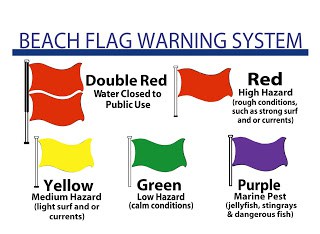 Sunday we had a yellow and a purple flag.

“Screw harmful marine life,” I said bravely to my family. “I’ll punch a shark in the mouth.”

Enter Tropical Storm Colin, which my family and I bravely soldiered through, as can be seen in the following life event on Facebook. 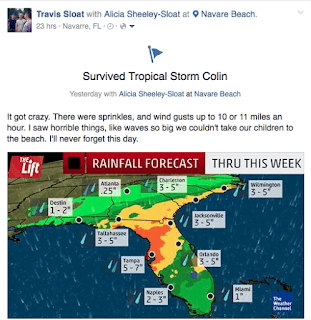 Sprinkles aside, the storm gave us a red flag yesterday, and another red flag today, even though the weather was gorgeous.

I don’t like coming to the beach and not being able to get in the water. I’m a fish, with a natural born grace in the sea and a body full of flotation devices to keep me buoyant and right side up. I’m also fat, and there aren’t a lot of forces in the world that can act upon me in such a way to knock me, as the expression goes, *ss over teakettle.

So this afternoon I got in the water.

“Screw the red flag,” I said to my family. “Kids, stay out, daddy is going to do this alone.”

Things went well for about five minutes. I dipped, I dived, I twirled in the water like a fish, nay, a dolphin.

Here’s where I want to tell you about the beach reconstruction.

You see, in Navarre, they’ve been reconstructing the beaches, which involves pumping copious amounts of sugary fine white sand from the ocean floor onto the existing beaches, extending them further into the Gulf. The thing is, when they bring up the sand, they also bring up seashells. Millions of seashells. I can’t even adequately describe the amount of seashells on this beach.

Naturally, standing barefoot on the beach or in the water takes a bit of practice. A fine touch, if you will. Something I possess in the water.

Something that failed me just as a monstrous “red flag” wave crashed over my body.

Y’all remember the scorpion in Latvia, I’m sure. That was nothing. The football team making me their collective girlfriend? Child’s play.

Guys I crap you not that wave rag dolled me into a shape I didn’t know I could achieve. My feet touched the back of my head and then my head went straight into the largest bed of seashells ever collected by the Lord Himself under the waters of the Gulf of Mexico.

As I bobbed upside down in the turbulent water with my feet looking like a cork with a perch attached to it, and the skin being flayed off my forehead like I belonged to Ramsay Bolton, it slowly occurred to me that this was it, this was how I was going to die.

Alas, the Lord returned my buoyancy and grace at just the right moment, and I sucked in more seawater than a man should ever inhale just before my head broke the surface and I tasted sweet delicious oxygen…right as another wave tossed me to shore in much the same way I imagine Jonah was spat onto the beach in Nineveh.

I stood up on shaky legs and shaky pride, and quickly assessed the situation.

I walked slowly up the bank with people staring at me. Some of them even had snarky little smiles, as if they’d known all along what would happen to the fat white guy from Oklahoma who couldn’t wait for a yellow or green flag.

“Dude, you’re bleeding. Are you okay?”

“You get turned over?”

My beautiful and ever-concerned wife sat in her beach chair, discussing our plans of being teachers in Florida with our condo neighbors as I walked up.

Her voice cracking with the weight of her overwhelming concern, she collapsed into a fit of laughter as she surveyed my bloody forehead.

“You get knocked over?”

Our neighbors joined in the laughter.

If you need me, I’ll be on the beach, waiting for that sweet, sweet green flag.