On not being allowed to fail 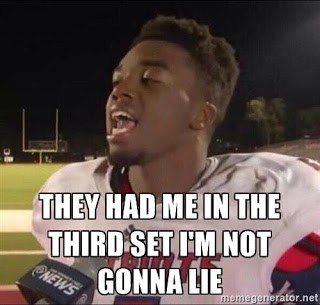 I saw a blur out of the corner of my eye, and then a face above me.
“How many more?”
“Two.”
“Do it.”
I lowered the weights, then got them halfway back up. A slap against my elbows and the weights were at the top. Lowered, another slap, at the top. Set three was in the books.
“Thanks,” I said.
“No problem.”
A couple minutes later I was ready to start round four. Having needed a spot the last set, and not wanting to bother anyone this set, I walked over to the rack and I picked up two 40-pound dumbbells.
I got to my bench, got ready to sit down, and I looked up. He was looking at me.
“You’ve got 45s in you.”
I opened my mouth.
“Travis. You’ve got 45s in you.”
I set down the 40s and picked up the 45s. I knew I didn’t have them in me, heck, I would wind up having them inside my brain by six reps.
I laid down on the bench, opened my eyes, and this guy was there.
He let me get through eight reps on my own. I couldn’t believe I got that many, to be honest. The ninth rep though, wasn’t happening.
A slap. Nine happened.
A push. Ten happened.
“Squeeze it at the top.”
Another slap, another push. Eleven happened.
“C’mon. One more. Do it.”
His hands never left my elbows, and I think it was more him than me, but twelve happened. I threw the weights across the room (dropped them pathetically), and opened my eyes. He was gone, sitting back down, going through his phone.
It didn’t hit me until the drive home.
I wasn’t allowed to do less than I was capable of, and I wasn’t allowed to fail.
I’ll add this. I had tuna for lunch. I spit when I exhale. When my head is lower than my feet, my face turns a sort of odd purplish-red color, kind of like a grape about to go bad.
I was not easy to help. It didn’t matter. I wasn’t allowed to fail.
As a teacher, I come across all sorts of kids. Some kids don’t want to try, some want to try but don’t have the means, and some are completely capable with school work, but are socially awkward.
What if I didn’t allow my kids to fail?
Some of them aren’t pretty. Some of them might have had tuna for lunch, and some might not have showered for a week. Some might spit when they talk, and some might not talk at all.
Some are not easy to help. It doesn’t matter. They shouldn’t be allowed to fail.
What if, as educators, we began to look through the lens of this guy at the gym? What if we took the too cool to try kids, the socially inept, the nose pickers, and we didn’t let them fail? What if we carried this attitude through an entire school day. An entire month, a year?
“Hey kid, put the 40s down. You’ve got 45s in you. Yes you do. Two more. One more. Finish this.”
It might be unrealistic. Some don’t want the help yet, some don’t want it at all. However, we owe it to them to try. We live in a world that encourages trophies for participation, results that happen overnight, and exerting as little effort as is required to reach the goal.
Hand ’em the 45s. Push them. Don’t let them fail.
And Zac, thank you. You did more than just help me lift weight in the air. You didn’t let me fail.