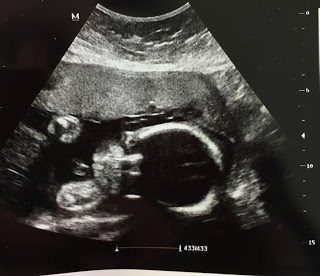 I’m typing this from the doctor’s office. We’re here for a checkup on Isaac, making sure he’s growing like he should and hoping he won’t be covering his face for the next ultrasound.

I’m about to be brutally honest with you, and I hope you can forgive me for it.
I don’t want four kids.
Up until this morning, I have been dreading Isaac’s arrival, I’ve been worrying about my money, my time, and the fact that I’ve got three adopted children who might grow up holding a grudge against our sole biological child.
Akeeli, Aven, and Drake, if you’re reading this, I need you to know I never loved you any less than Isaac. Not for one second. I know you can’t help feeling like you might feel, but listen: I love you more than you could ever imagine. I love you so much I’d die for you.
On the way to Tulsa this today, I had to drop my truck off in Wagoner to get the oil changed. This is in no way a sponsored post, but the guys at Kevin Grover are seriously the best, and one in particular slapped me in the face with some truth this morning.
He walked over to me, and I spent some time trying to figure out if I was looking at his smile or the sun. That’s Neil being Neil though. I’ve never thought of him as car salesman, he’s a friend who happens to be exceptionally skilled at getting me to spend huge sums of money on things with four wheels.
My son weighs 2.6 pounds today. He’s grown tremendously in the last two weeks.
We’re sitting in the lab now, waiting on blood to be drawn. In fact, I’m almost positive Alicia is actually reading what I type as I type it. She’s talking about how much Isaac has grown over the past couple of weeks, and saying that he better slow down. I think she’s finally realizing that when you have a giant for a husband, his kids might be huge too. I don’t know, maybe just my head is giant.
Back to Neil. He came over and shook my hand.
“Two things to congratulate you for, Travis. One, you look fantastic, and two, your newest little one!”
Everyone always does that. If they’re familiar with our situation at all, they’re so excited for us; for me. I get that, and I’m thankful for the empathy, but up until today, it was a forced smile, forced enthusiasm. So I smiled back at him, and I gave my prototypical response.
“Aww, thanks! Be excited for her though, I don’t want four kids.”
Neil didn’t even blink.
“Oh stop that, Travis. You’ve created an eternal soul.”
I’m alone now, Alicia has gone back to have her blood drawn, and I’m fighting tears as I type this. It’s me and one old lady in the waiting room, and I don’t need her wondering why the behemoth four chairs down is blubbering quietly into his cell phone.
We’ve created an eternal soul.
My son is an eternal soul.
Isaac is an eternal soul.
Somewhere in my brain a switch flipped. I took a couple of confused steps and finally spit out a response.
“Thank you, Neil. I’ve never looked at it like that.”
“I’ll leave you guys alone, I know you’ve got a busy day planned!”
He bounced away, frustratingly happy, unaware of the chaos he’d just wreaked in my brain. Unaware of his creating a tectonic shift in the pangean plate that is my selfishness.
You see, that’s all it is, selfishness. One thing I’ve discovered since having children is that I am, by nature, a selfish person. I didn’t realize that until after we’d adopted the kids, but it’s true. I am a selfish person. I want my time, my money, my stuff, my wife. I, I, I, I.
I’m not saying all that changed instantly. I know somewhere between now and the next eighteen years, I’m going to be selfish. But I was given a new way to look at things today. I have four eternal souls that I am now responsible for. Five and six if you count mine and my wife’s, and that’s a whole lot of souls to be in charge of.
My dad figured it out. I don’t know how, but he figured it out. Reading his writings from when I was a kid, I know he was frustrated, unsure of himself as a father, and selfish. But at some point he cracked the code. He figured it out, and he took responsibility for the eternal souls he’d helped create, and he did a damn fine job of it.
Now I’m back at the doctor’s office, waiting for my beautiful wife and my son to come back from getting a shot, which is apparently what you have to do when your husband’s blood (A+), has a higher GPA than yours (A-). We’ll leave here and go pick up two other sons and a daughter, all of which are mine.
Today is a new day. Today I was verbally slapped by a friend who has obviously figured some of it out.
Thanks, Neil.
Here she comes. Gotta go. I’m gonna try figure it out.