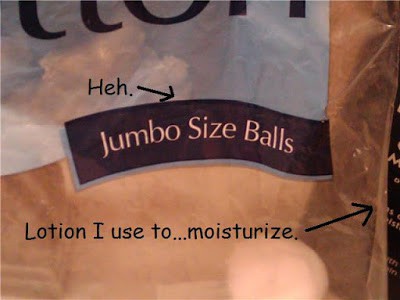 WARNING: Lazy post ahead. Proceed at your own boredom.

When I get out of the shower every morning, I laugh. And not because I catch a glimpse of myself in the mirror. It’s because I see this:

Here is a picture that I took on Christmas Day, right before my family went sledding.

I am Ninja Travis. And you should fear me. Oh. And the Blue Devils. 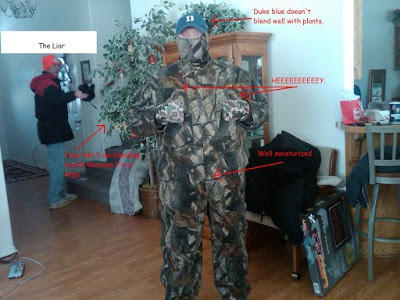 And finally, well, I really don’t think this needs words. 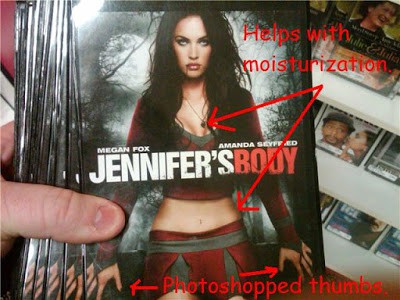 Last, but certainly not least, my sneaky way to link up with the other Post It’s this week, hosted by Supah Mommy, who will probably bitch at me for doing this, if she can find which post it I’m under. 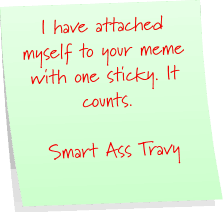 Please love me back?
You might have noticed some changes around here.

You may tell me what you think.

However, iffen it’s negative, you can take your suggestion, wad it up into a tight little ball, and…

So yeah, it’s my winter theme. I’ll probably change that shiz in the spring.

Also, some of you may remember a while back, me posting a tweet and a FB status update about me beating the gas pump at Wal-Mart by letting it wonder whether or not I wanted a receipt. Well, tonight it got it’s revenge.

As I was walking by the pump to go pay for my gas, I heard Edwards voice from Twilight.

I don’t mind tellin ya, I almost stopped dropped and rolled. It sounded like he was right behind me, and he was speaking in that sad, emo monotone he always uses. Sure that I was about to become his first human meal in ages, I kind of panicked a bit, maybe even ducked, before I realized that his voice was coming from the same exact TV that keeps offering me 7 cents a gallon off of gas if I just add $897 worth of fuel saving additive.

My war with this machine continues. I will win.

I’ll be back with a tear jerking post tomorrow. Shit will make you laugh and cry at the same time. Kind of like you did anytime President Bush talked. You’ll love it. I won’t even have to type much. It’ll just be a picture, and that will be all it takes. And no, it won’t be me naked.

Also, there has been some talk about me doing a rap vlog. I am thinking about this. Let me know if you would like to see it!

The Missus called me yesterday.

“Carmike has a midnight showing of New Moon!”

So yeah, I went 4 hours early to get tickets, and the place wasn’t even open yet. Kid Funk tried to introduce me to Fandango, but it didn’t like me too much.

I went back, stood in line, and got the tickets.

As I got the tickets and was leaving, I did the funniest thing that never got laughed at. There were about 100 people in line, and the theater guy came out waving his little arms and said, “Does anyone here want to see something that is starting NOW?” And I piped up above the crowd and said, “I want to see A Christmas Carol!”

Finally, from the very back, I hear a guy.

By the way, I’m totally Team Edward. That’s real. Vampires are so much cooler.

I won’t post anything about the movie, other than it was great. I really think it was much better than the first one.

Be jealous, I saw it before you.

However, as we were waiting in line to get into the theater, shit got crazy. First of all, I met a fellow blogger whilst standing in line. I looked at The Missus and said, “I’m totally blogging about this.” And this lady behind us said, “Oh, I am too.” So of course I demanded asked her the name of her blog, and of course started braggin on you guys being the best followers in the world. And guess what? She only has 19. Why don’t y’all go show her some love! She lives in my town!!! Click here to go visit her. I haven’t really read through the blog, so I take no responsibility for what is on there!

I really am running on like 3 hours sleep here, so I’m not funny today. I may come back later for more, but I just don’t know. I need sleep. Go read the guest post! Then go check the post of Cheapskates, and then go give Ruby some lovin. Not literally though. Her husband looked like a pretty solid dude.

Oh. And I should mention, there is something big headed your way. And no, it’s not me on a bike. I’ve collaborated with a certain blogger named Lauren, and let me tell you, great things are afoot. It’s still in development, but we’ll let you know something soon.

Anyway, I’ve had a busy Novemeber, and I just thought you might want to hear about it.

Novemeber 1st was my birthday. I turned 27. Since most of the men in my family die at 40, this means I have 13 years left to live. A lot of people get upset when I talk like that. I still don’t understand why. I guess maybe they want my fat ass around a little bit longer, and I’m okay with that. Thanks.

Anyway, November 1st also started something called “No Shave November.” It’s something that one of the colleges in Oklahoma claims to have started. Either way, I decided to participate in it. The Missus, being the lady that she is, decided she didn’t want to walk around with a husband that looked as if he had pubic hairs glued to his face. Which is what my “beard” happens to look like. So she started a new tradition in our home called, “No Sex November.” I made it to the 12th. I don’t really even remember why I held out that long. I’m an idiot.

I’ve been busy on my novel. Last count, I was at 25k and some change. I made it to that by the halfway deadline, so I was proud of myself. I haven’t written in two days though. I’ve just been contemplating the ending and how I want to wrap things up. I’ll start again soon.

My Duke Blue Devils started their season. They are 2-0, and I’m excited. We have a bunch of tall skinny white boys on the team that look as if at some point during the season, I might be able to call them monsters. I don’t think it’s a National Championship team yet, but I do know that Ed over at Ed’s Funny Pages will be wearing a Duke cap come March.

I broke up two fights here at the school last Friday morning. The first one between two boys, the second between two girls. In the boys fight, the one I grabbed looked down at me and said, “Get your fuckin hand off my chest.” Then he saw who I was. His temporary moment of insanity cleared up, and just in time. That was the extent of my injuries. The girls fight? Oh, I’m glad you asked. We just said, “Hey, gals? Can we break this up? And they stopped and hugged and cried and had popcorn and watched Twilight together. It was so sweet. Yeah… I’m lying. You know how I’m always talking about punching someone in the throat or neck? That happened to me. Upon restraining one of the girls in the fight, the other one got loose FROM TWO FREAKIN TEACHERS, and punched me twice in the neck and once in the throat. Yeah. Do you have any idea how hard it is to not punch someone who has just punched you in the throat?!? I do.

I learned yesterday that no matter how funny that you think racism in the state of Kentucky is, not everyone is going to find it as funny as you. I guess we’ve not yet reached a point in this great country where pointing out someones backwards way of thinking is funny, but we can damn sure make fun of Jesus all the time. Talk about a comment killer. Hell, I had to double check my following to see if they were still there. But then, everyone showed up and loved my video blog, but hated Nic Cage. Note to self. Nic Cage and racism are bad blogging topics.

Speaking of followers, I picked up 3 new ones yesterday with that vlog! That’s exciting stuff! I’d like to welcome you all to the fold, and I just want you to know that any Kool-Aid offered to you is sure to be poison free. That ain’t how I roll.

I’m wicked ready for New Moon. Yeah, I know that makes me gay. But guess what? I totally have the chance to have sex with a woman tonight. So does that make me gay? Yeah, chances are, I’ll say something to ruin it, but that’s just because I’m a man.

I guess I’ll leave you alone. Told you it wouldn’t be funny today, but I have a challenge for you. Let’s rise to it! I asked the question a while back “What song would you want stuck in your head for the rest of your life?” I asked you not to answer that in the comments, but in an email to me to be part of something that may or may not go down as the biggest fail since Palin hooked up with that grizzly bear that told her “he had connections, so she would win for sure.” Anybeastiality, I now want you to answer that question in the comments! Let’s see how many people respond! If you came over from Facebook, you can leave one anonymously! Lets set a goal, shall we? 93 followers on blogger, 61 on Facebook, taking into account that Facebook people never comment, 93 and 61 is 154, lets say, 30% of that. That’s 46 comments!

I want 46 comments, people. You can do it. Show me you can! The question is, “What song would you want stuck in your head the rest of your life?”

P.S. I love you guys, I really do. If I get 46 comments on this blog, all by different people, I promise you this. I will take suggestions on something humiliating for me to do on film, and post it here on this blog. That is my oath to my readers. Let’s see if you can do it.

Yeah… He does! Look on down my sidebar there and go follow him. It’s more a college football and beer type thing, but for sure, he’s still one funny dude. Need proof? Go read some of my conversations with him!
Things I’ve done this weekend:
Got told I couldn’t have a new TV.
Bought a new stereo and speakers for my truck.
Played golf. Shot a 102. Don’t judge me.
At 92 shrimp in one sitting at Red Lobster.
Hung out with some very interesting family members of my wife.
Watched The Matrix Reloaded. Twice.
Been generally lazy.
The best part is? I get an extra day! Yay Labor Day weekend! I may go throw rocks at the jet skiers tomorrow. That will be fun.
Excuse me, I’m gonna go poop 92 shrimp…