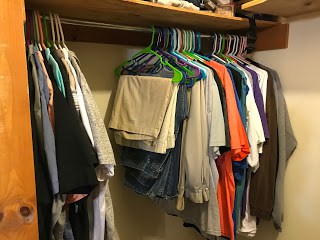 It happened a few weeks ago.

“Travis, you need to clean out your closet. I need hangers.”

I laughed and went on about my business, trying not to give it a second thought. I did though, and a third, and a fourth. However, I never got around to cleaning out my closet.

Sunday though, it happened again.

“Travis, I got you these bags, you need to throw some clothes out, but if you want to keep them I understand. We’re just going to put them in these bags.”

I was cooking dinner for the family — nachos if we’re being honest — and Akeeli was helping me. I laughed again, then stared at Alicia, trying to come up with something to say. A lump formed in my throat, and I felt tears coming in the corners of my eyes. I turned back to the hamburger sizzling on the stove and busily crumbled it, hoping the situation would resolve itself without me having to acknowledge it.

“Daddy, why did you laugh and then not say anything?”

•••••••••••••••••
I’ve heard a lot about Stockholm Syndrome, and I’ve always wondered how it’s possible for a captive to have any positive feelings about their captor, much less sympathize with them. If someone ever abducted me, I always felt I would never fall victim to the mysterious psychological condition that is apparently so powerful, it led hostages in a Stockholm bank robbery to decide not to testify against those who held them captive.

My weight has abducted my happiness, healthiness, attractiveness, my self-esteem, my activity levels, and some of my relationships. It has taken more from me than I’ll ever get back, particularly my health.

I’ve lost weight before. Back in 2010, I went on a run where I got from around 380 down to 300. It lasted approximately 10 weeks, and then the scale was tipping 360 once again. I couldn’t maintain. I fell back into bad habits, and I got to the point where I didn’t care anymore.

Fat Travis was an awesome abductor. He wasn’t an inherently bad guy, he just made some bad choices. He wasn’t keeping me hostage with the intent of killing me, he just wanted to not have to worry about self-control. He enjoyed the lack of responsibility, because Fat Travis hated responsibility and accountability.

Fat Travis is a good guy, really. Don’t hate him. I don’t, and there are also days when I miss him.

•••••••••••••••••
So when my daughter asked that question: “Daddy, why did you laugh and not say anything?” it slapped me in the face and brought me back to reality. Tears threatened once again, and I fought the urge to lie to her. Instinctively though, I knew she needed the truth.

I went back to cooking, and she went back to helping, and Alicia wound up knowing exactly how I was feeling, thank God. Later that afternoon, I went to play a game of basketball, and when I got home, she motioned to the closet.

“I took care of the closet. It seemed like you were having trouble. I didn’t throw all of it out though, some of it is just bagged up.”

I don’t know if this will stick. I’m trying my hardest, though. If it does, then I’ll get to look back ten years from now and wonder why in the world I didn’t do it sooner. If it doesn’t…well, maybe my struggle will motivate someone to never let it get this bad to begin with. Maybe my beautiful daughter will realize the mental struggles her father dealt with about his weight, and it will help her say no to another plate of pizza and yes to a salad.

But for now, a large chunk of me is gone. Success, I’m told, is kind of like being pregnant. Everyone is happy for you, but nobody knows how many times you got screwed. The plot line of my journey isn’t something you could ski down, instead, it looks more like someone having a heart attack.

I am also taking steps to surround myself with people who support what I’m trying to do, even if it leads to me throwing out three-quarters of a brick of Velveeta. 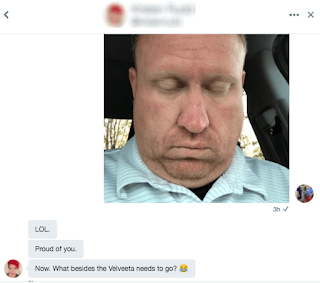 I guess I’ll also continue to try to make space for my success. Even if it hurts.