We all now know that a few days ago, I asked y’all to vote for me, y’all showed up like Republicans to a gun show, and I wound up winning a $50 gift card.

What did you win?

Well, you won the right to choose what I have to do to reimburse you for your vote.

I’d like to lay out a few ground rules though.

The first rule is this:

After January 1st, I’m going on a diet for 6 weeks, and I can’t eat anything. None of you suggested anything like that, so it’s all good. And yeah, I’ll tell you all about the diet later.

I WON’T DO ANYTHING NAKED. Geez, people. I have limits, and there isn’t enough pixelation in the world to cover up the stuff on me you don’t want to see.

I won’t do anything illegal. Seriously? Run down main street with a target on my butt? Geez. What is it with you people?

With all that being said, I will give you the suggestions that were given to me that follow those guidelines, plus a few of my own that I have thrown in. Y’all have to vote on it, and if you want to rig the vote by sending your followers over here to vote for your choice, by all means, go ahead. Just post in the comments the one you vote for. One of the suggestions was “do something with bacon.” So if you want me to do whatever you vote for with bacon, just add a “with bacon” to the end of your vote.

1. Wear a dress and make a vlog while wearing a dress. (I will perform a musical number.)

2. Get in a potato sack and hop across town.

3. Do a “polar bear” dive into the local lake in nothing but a pair of skivvies.

4. Dress up like Lindsay Lohan and say something to my adoring fans, in my best LL voice.

6. Make a “Just because my pickle talks doesn’t make me an idiot” video.

7. Make a video on how I plan to become mayor of Okay.

I’m sorry Lee, but I can’t think of anyone who would loan me a cow to wrestle, otherwise that one would be up there. For sure, I’d wind up accidentally killing a cow by suplexing it, and then where would I be? I’m pretty sure that’s a “if I break I buy it” type thing.

There you have it. Let the voting begin!

Since neither Ed nor Moog made suggestions, I went ahead and made them the 10th choice, which just means that they can collaborate on something for me to do, and then announce it. As long as it follows the rules, I will do it.

You can only vote once, but like I said, you can invite your friends over to vote as well. Heck, that’d be cool, because I might have a chance at breaking 50 comments for the first time ever!

Supah started this shiz, and she gets the credit.

If you’re new here, I ask ya to sit down and stay awhile. I’ve got some wine in the kitchen, why don’t you put on this lacy thing right here? That’s it. Slowly. Now grab that plate of nachos and feed me. Now that plate of pizza. That’s right. Shove it in there. Not slowly. Quick. I’m hungry. Now those cookies… Yeah… Soup? Yeah baby… That’s right. Get that salad the hell out of here. Where were we? Oh yeah… Gravy… Mmmmm… No, no I don’t need to put it on anything. Just ladle it in my mouth! That’s it. Do you have a bigger ladle? No, not that one. The other one. Yeah… Damn. Are those cold cuts? Don’t you put vegetables on my sammich… Now let me use that lacy thing as a napkin… 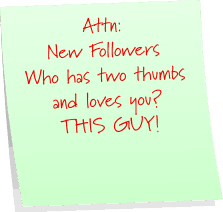 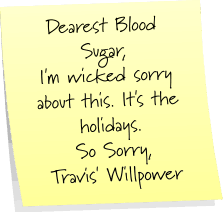 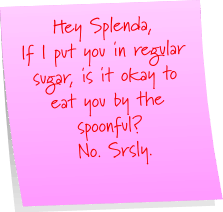 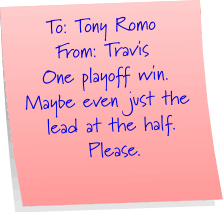 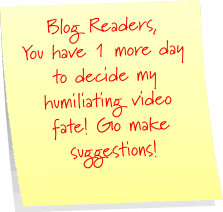 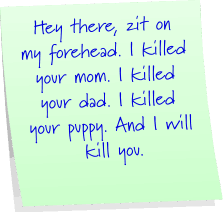 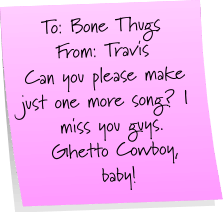 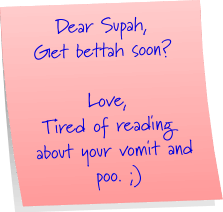 If you’re wondering what that 5th note was about, here’s the deal.

I challenged y’all to go vote for me a while back to win a contest. I said if I won, I’d do something humiliating on video that my readers got to pick. Well, I won.

I need your suggestions, people! So far, there have not been a lot! The only suggestion I won’t take is the rap video, because that is already in the works, and it’s gonna make me look friggin awesome, not humiliated.

So make a suggestion! Anyone can! Put it in the comments, and we’ll start voting on Thursday or Friday!

Well, I asked my readers to come support me, and I currently have a call in to Vicky’s Secret to market your support as the best damn bra ever.
That’s real.

You remember that contest I asked you to go vote for me on?

It wasn’t a clean victory. I wanted to keep it honest, then it got hairy, and I had to call y’all in.

And twice in a week, y’all have kept it real.

I was wicked excited about that, until I remembered the deal I made with y’all.

Anyway, I guess I owe you.

Starting today, and lasting until, say, next Wednesday, I’m gonna take suggestions  for what you guys think I should do in my video. When I’ve collected the suggestions, you’re gonna vote for the best ones. The winner of that? That’s what I do.

I’d ask you to play nice, but I know that’s not going to happen.

On a positive note, with the 50 extra dollars, I’m going to be able to film myself with a BRAND NEW VIDEO CAMERA! FTW!

Let me have it, folks.

I know that two posts this close together are comment killers, but I need a new pair of shoes.

I need a favor from all of you, and this isn’t to be without a reward.

I need you to go HERE and vote for my suggestion.

If I win this contest, you have my word, I will do a video.

One where y’all decide what happens to me.

Just leave a comment saying which suggestion you want to win. I’d prefer it if you all pick the same one. Let’s go #2, okay?

Thanks guys and gals, and like I say, YOU will get to pick what happens to me in the video!

Lately some people have been doing caption contests.

I just need your comment. The funniest one, wins. And no this isn’t related to my funniest comment of the week game.

This is a picture of the reading material currently in my little brother’s (The Groom) bathroom. 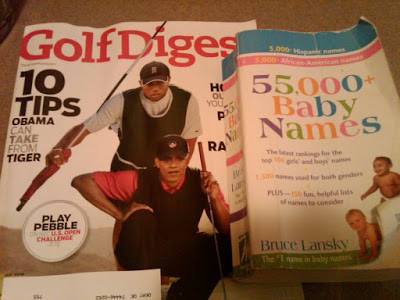 What does this say to you?

Can I get 50 comments on this, people?

Last weeks giveaway was so fun that we have decided to do another one! Every entrant won something last week, so we are excited for this week! If you missed out last week, we hope you enter now… or even enter again!

Here is how to enter: Copy the following to a blog post, be sure to leave a comment with your URL so we can check it out, and you are instantly entered! As a special thanks for entering our Holiday Giveaway, we are offering ALL entrants 20% off until the end of the year! Your prizes can be redeemed in giftcard form if you would prefer to give them as a present to a loved one! Just see the post below!

Bloggy Blog Designz is having ANOTHER Holiday Giveaway!!! Last week every entrant won something, so they decided to do it all over again! They are giving away blog designs and all kinds of goodies. Plus ALL entrants will receive 20%off their purchase through the end of the year! Be sure to check out their website for more information, or to enter yourself. Take a look at their portfolio and packages to see what you want for Christmas 😉 With 6 giveaways this week, who knows whats in store for next week?

The first 5 entrants will receive a $10 giftcard. The giveaway will close on Dec. 13th, so be sure to have your posts done and comments left by midnight! Good Luck to everyone! We are so excited. Merry (early) Christmas!

(Our Design List is open after January 1. Discounts from this giveaway do not apply to designz in progress)

I am a featured friend! Tamara over at Mad Boastings of a Cheapskate Mom has me featured today because I won a caption contest. You can check out the post here. I am so thankful to her, and she did such a great job! Run over there and see how good I look! While you’re there, stick around, you may learn a thing or two about saving money and stuff.

Also, the world lost a great actor last night, and I’ve chosen to honor him by what I believe is his finest work. Here ya go, Swayze, you will be missed. (Sorry the quality is so poor… I couldn’t find a better one.)