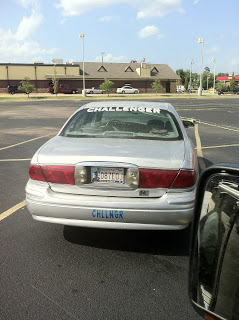 I am constantly on the lookout for new blogging material. Contrary to what you might think, the incredibly funny and thought-provoking content that is consistently uploaded to this virtual slice of Internet heaven is not of an endless supply.

Sometimes the content comes to me. Stories of my past, people doing crazy things, people pissing me off, deep thoughts in the middle of the night; all of those are examples of material presenting itself.

But sometimes, I have to search for the content. This is why I sometimes take pictures at awkward locations or moments. All I’m really trying to do is stir up something in this wacky brain of mine that will hopefully give you a chuckle.

In the following case, an opportunity presented itself, but it was up to me to grab it.

I give you exhibit A:

I’d like to talk about the person that owns this vehicle for a little bit. I feel like maybe if we look deep enough, we’ll discover some insights into their personality and social life that will help us understand why they felt the need to rename their car.

So here’s my take on all of this. The owner of this car is under 30, is white, is a male, and probably owns an Android cell phone because he wants to be able to hack it, but he never will for fear of breaking the phone. He appreciates the finer things in life but can’t afford them, so he makes the best out of every situation he can. He probably loves Comin Sans font, but is too afraid to use it for fear of being judged by people that think they’re cooler than him. He has a lot of dumb friends, one of who probably owns a small graphics shop in his parents’ garage.
Now, seeing as I’m about one degree of Facebook separation from every single person in the city of Muskogee, I want y’all to help me out by telling me whose car this is. I have to find out how spot on I am with my description. If you know the owner of the car, or if you ARE the owner of the car, please contact me. I’ll give you a chance to share your story with my readers.
Now if y’all will excuse me, I have to get back to peeling the “F150” logo off my truck and putting “Porsche” on the back windshield.

***EDIT*** Seriously five minutes after posting this blog, I got a phone call from a friend saying it was her boyfriend’s car, who we attend church with. Turns out, he’s in a band called “Challenger,” and all of the members of the band have this on their cars. Talk about your anticlimax, but I’m keeping this up because I like my take on it better. Unless of course he makes me take it down.

Something big is going down tomorrow, y’all. Something huge. Something so awesome it can’t really be measured on a scale of awesomeness. It doesn’t behoove me to use the word “epic,” mostly because I hate how that word is overused. But it’s the closest you can get to epic without being disappointing. It’s going to be incredible, and I’m going to be there. And it’s happening tomorrow. What is it? Now that I’ve kept you in suspense long enough, I’ll tell you.

Duuuuuuuuuuuuuude. Did you just watch that? How pumped are you? THEY’RE ALL BAD GUYS THIS TIME AND THE ROCK IS IN IT. How are you not calling for your advance ticket right now?

2001. Dude is a cop, he tries to catch some people stealing TVs and DVRs, winds up being compromised and lets his suspect get away. Included the most popular phrase among teens ever recorded in a motion picture: “I live my life a quarter mile at a time…”

2003: This film brings the addition of Tyrese, who will forever be an idiot to me because of “Baby Boy.” There is a Skyline in this movie. It is awesome. Also Ludacris is in it, making it awesome by default. Cop is being given one more shot by the FBI, he of course screws them over.

2006: The movie has a completely different protagonist, it’s set in Japan, and is widely regarded as the worst of the series. I liked it because it had fine Japanese chicks in Hello Kitty skirts and OMG VIN DIESEL WAS IN THE ENDING.

2009: This brings back pretty much all the original cast, minus the smoking fine girl that was Vin’s girlfriend. Lot’s of action, some desert racing, but a little too much CGI. Still though, amazing movie.

2011: DUDE THEY ARE BRINGING BACK THE SERIES AND IT STARTS TOMORROW.

20??: If they stop making these movies I might seriously kill myself. It’s like, what is there to live for anymore, you know? So hear me now, F&F makers, DON’T STOP. Keep this thing going as long as Vin has any kind of muscle tone. If it has to be F&F 56: Hoveround Wars, that’s fine. You keep it going. You can put nitrous on a Rascal and don’t try to tell me you can’t.

So in conclusion, your plans had better involve going to see this movie tomorrow night. I’m going to see it in IMAX, because bigger is better when it comes to that chick in the bikini you saw in that trailer. Also, could The Rock get any more awesome? Yes he can, in IMAX.

p.s. Seriously, I’m excited. I don’t think I’ve been this excited about anything in years, at least since 2009, and they pretty much told us the other day that we were getting kids. Don’t judge me, I like fast cars.


p.p.s. I need to borrow a fast car to drive after watching the movie tomorrow night. I have to put into practice what I just saw. Please make sure that it has a V-8 and full coverage insurance before loaning to me. Also wash it. Thanks.


p.p.p.s. I seriously pulled off the word “behoove” in a post about a movie starring The Rock and Ludacris. I am a literary god.