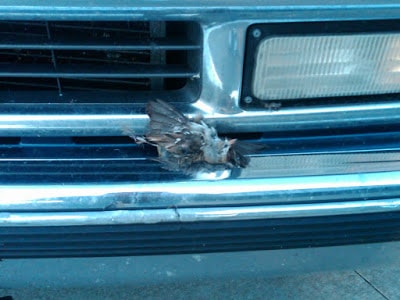 Kevin probably had a wife and a family, judging from the look of him, I’d say he was an adult. He probably had brothers and sisters and aunts and uncles and parents.

He probably went on trips in the spring and the fall, and he probably had lots of friends in a bunch of places around the world.

He was really kind of plain looking, kind of drab, even. No one would ever call him beautiful, and that’s just sad.

Another thing they wouldn’t have called Kevin was a good flyer.

You see, Kevin was a sparrow.

Yesterday, as I was preparing to leave the school, a couple of kids came up to me and said, “Hey Travis, you’ve got a bird on the tailgate of your truck.” I went out and looked, and there was nothing there. I didn’t think anything of it, because heck, it was a bird. Birds fly away. If I was a bird, I wouldn’t be caught dead on my truck.

Which as it turns out, wasn’t far from what happened. Not far at all.

So this morning, I go out to go to work, and I look at the grill of my truck. I find Kevin, stuck there, in all his dead bird glory.

Of course, I’ve taken the liberty:

You see, poor Kevin had the misfortune to be one in a group of sparrows that got in my way as I was running late to work yesterday. Really, they weren’t even in my way, they were off to the side of the road, but I guess my truck roaring by on the highway gave them a spook. They all took wing, with the exception of Kevin, who took a header straight into my chrome bumper.
“The early bird gets the worm, AND gets safely out of the way of a 95 Chevy truck speeding down the road.” -Travis Sloat
Kevin stuck with me through three trips yesterday, so I can only assume that his little body froze to my grill.
That’s nasty.
So today, I did what any normal person who didn’t want a taxidermied sparrow hood ornament would do.
I knocked him off the grill with a pitching wedge. 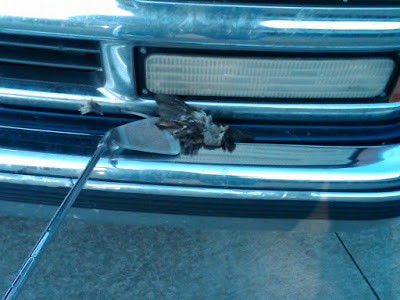 Why a pitching wedge you ask?
Well, two reasons.
1.) I don’t want to get the bird flu. Because for sure, iffen I get the bird flu, the swine flu will follow soon after, then the regular flu, and…well, let’s be honest. Maybe I should have gotten the bird flu. I could stand to lose some weight.
and
C.) I find that a pitching wedge gives you excellent control without giving up too much power around the greens. It produces a soft shot with some backspin, which came in handy when I chipped Kevin from my driveway to the nearest tree. 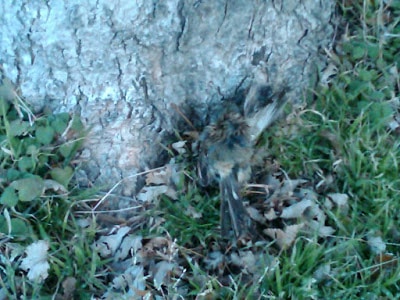 That’s closest to the pin, folks.
I win.
I’ve written something for Kevin, I’d like you to all read it to the tune of “Arms of an Angel” by Sara McLaughlin or however you spell it. Maybe you even want to play it in the background.
In the grill of a truck,you sped away from here.From this cold, sunny day, and the bigger birds that you feared.You were chipped from the grill, with a pitching wedge from me.You’re in the grass by the driveway, laying by a tree.
Rest in peace, Kevin.

Once again, thanks to Lee, or maybe thanks to my genius filmmaking, I’ve gotten some new followers. Folks, I just want to say that I do not normally condone birdicide, but this was just hilarious. If you don’t like this sort of low brow, “laughing about dead birds named Kevin” humor….well……

I love y’all. Let’s have some fun.

I love to golf. And simultaneously, I hate to golf. I know that I am not the first person to feel this way. I would think even that Tiger Woods, after putting on his Nikes, getting out of his Buick, and downing a Gatorade, might even tell you he hates golf. Ask him after this weekend. I heard it was bad.

I went out golfing with The Groom yesterday. I didn’t realize it when I told him I would, but the temp outside was soaring to a very sweaty sunburny 102 degrees. I might add, at 115% humidity. Thats right, the humidity here in Oklahoma goes above the call. If our humidity was on a little league team, it’d get Most Improved every year.

We teed off on the first hole, and I actually hit a far tee shot. Into the woods. By woods I mean about 8 trees to the side of the fairway. Really not the woods, but it’s trying hard. From there on, it was a brutal day. I lost more balls than a Persain army tryna teabag Sparta. I played horribly. On the 8th hole, I hit 5 straight balls into a lake. I hate that hole. And everytime I hit a ball, The Groom would say… “That’s the water.” Douche.

The greatest point of the day would be when I hit a beautiful chip shot on the 10th. The Groom said, “I want you to know, you hit that exactly where you were aiming.” And I was thrilled! I said Thanks! And he said, “Travis, you weren’t aiming anywhere at the hole.” Apparently, I suck so bad, I compensate for it by aiming completely away from the hole. So when I hit a great shot, it still sucks. Thats retarded.

At one point I hit my ball and this… 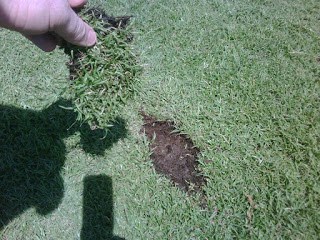 Went further than my ball. Of course The Groom had a good laugh about that. It’s not that I’m especially horrible, because I know people that are. It’s just that I’m terribly inconsistent. If I take a warm up shot, the warm up shot is always perfect. But the actual shot will wind up making me get poison ivy, or using my “hand wedge” to get in better position.

This is the scorecard at the final end of it all… 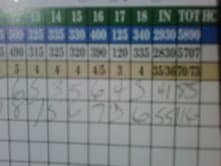 That’s right. That’s a 116 for me. For all you non golfers out there, the amount that should have been was 70. That means it took me 116 strokes to do what it should have taken 70. That’s 46 strokes more. Or embarassing. You could just call it that.

For what it’s worth, the entire back 9 was temporary greens, and it was impossible to putt. But I suck at that too. It was also 102 outside, and the course was covered in rocks. The lake being up had destroyed 60 percent of the greens and fairways, and I’m pretty sure I had a stroke on the 4th. And the 16th. On the 17th, the green had been moved up so close to the tee box, that as a joke, I teed off with my putter. I parred that hole. My tee shot landed about 4 feet from the cup, I mess you not. It was my only par of the day.

All in all, a great Sunday.

But geez I hate golf…