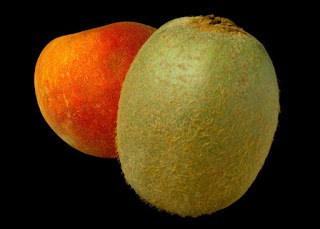 Before we get started, yeah I skipped yesterday, big deal, let’s just call this thing what it is, an “I’ll write when I feel like it but don’t judge me if I miss a day” challenge.

Today’s topic is a fruit I dislike and why, and it’s an easy one with a blanket answer.

I hate any fruit with fuzz on it.

Peaches, kiwis, and anything else that might exist where you have to shave it before you eat it.

Don’t think the double-entendre is lost on me, in fact I have a funny story about that.

Several years ago, I was in Sunday School class when the mayor of Muskogee walked up to me and asked me if I liked peaches.

“Bob I don’t eat anything with hair on it.”

I’d like to tell you that this is the most awkward thing I’ve ever said in church, but if you’ve known me for more than five minutes, you’d know that’s a lie.
Back to the fruit though, it’s a sensation thing. If I want a piece of fruit, I want something smooth and easy to eat. I can’t do bananas because the texture makes me gag. I’ll eat every banana Laffy Taffy you ever set in front of me though.
Kiwis are definitely worse than peaches. I’d eat a peach if someone cut it up and did the dirty work for me, but if you set a kiwi in front of me we’ll just stop talking. I won’t even say bye, I’m just going to walk away and say, “Hey Siri, delete **** from my contacts.” If you aren’t in my contacts, I’m going to find one of your friends, ask them for your number so I can apologize later, then block your number. I hate kiwi that much.
Fruits I do like? Well, apples, oranges, watermelons, grapes, melons of all kinds (heh), berries, and tomatoes, because I’m that guy that will tell you tomatoes are really fruit even though everyone knows that already and no one cares.
Also, I quick aside, I turned 33 today, and I started No-Shave November, and my birthday is technically 25 hours long* which is awesome. Just don’t get me fruit as a present. Love you guys.
*I have no idea if the math is right and I don’t careI want to preface this entire blog with this: I love our children, I would take a bullet for our children, and I would go to the ends of the earth to bring them happiness if that’s what it took. Thankfully, right now, happiness is only as far away as the nearest item with the highest sugar content, so we’re good.

But I do have a few minor hang-ups. And as odd as it may seem, this entire blog started with towels.

So let’s take it back to the beginning. We all know that I have a problem with bathroom shame. I’ve had it since I was a kid, and I’ve never been able to shake it. I’m simply not comfortable knowing that anyone else in the world goes poop, particularly the ladies. I’ve been married to The Missus for 9 years now, and she’s never once pooped, farted, or talked in any detail about either. She also doesn’t pee. She tinkles.

I probably forced my bathroom shame on her, and that probably happened when, the day before the wedding, I told her, “If you ever poop or fart, I’ll never find you attractive again.”


So we’ve been together all this time, and it’s a great thing we have going on. Then…we were introduced to the children. Being three and five when we got them, we didn’t have the whole “poopy diapers and potty training” experience. We’ve been told countless times, “Dude! You didn’t have to deal with diapers or potty training or anything!”


Alright, first, let me address the fact that some of us don’t consider that “lucky.” Some of us, particularly my better half, would kill to hold a baby and have it poop all over her and potty train it and stuff. That’s me being real, so ease up off the “lucky” talk. Second, I don’t know how many of you own a four and a six year old, but they’re gross. Straight up gross. I just walk around my house, looking at them, and thinking about how disgusting the things they do are. The heck of it is, most of the things they are doing, I do too. But somehow, maybe because I’m an adult and I know how to shower properly, it’s more disgusting when they do it.

When I walk into the bathroom in the morning to begin my morning ritual, the first thing I have to do is stare intently at the toilet seat for at least thirty seconds to make sure there aren’t any little pee sprinkles. The boy child lifts the seat most times, but there have been mornings where I’ve been surprised. And not the cool, “OH MY GAWD I JUST WON THE LOTTERY!” surprised, either. If I see any water droplets of any kind, I have to spend another two minutes in an intense cleansing of the toilet seat ritual, even if those water droplets are from The Missus getting out of the shower. I’m not willing to take that chance.

Then, when I am seated upon the throne, my eyes turn downward to the floor, where more than likely, last night’s clothes that were removed before bath time are still there. Before you get all judgmental, let me ask you a question. If I walked in your bathroom right now, would there be clothes on the floor? If you answered no, you  a) are a liar, b) might be gay, or c) you had company last night. Don’t get mad at me about the gay thing. If you aren’t any of those things, chances are probably good you have to take a pill to help balance out your moods.

So I’m looking at the floor, and there is –ahem– underwear. There is a possibility that it could belong to any of us, but usually it belongs to the kids. I still have a problem seeing little girl underwear. I have not seen our daughter in any state of undress since we’ve gotten her, and I’m petrified of the day it happens. Doesn’t feel right. I’m also terrified of the day one of them accidentally sees me naked. I seriously feel like I need deadbolts on our doors when I’m changing. But back to the floor and the underwear that lies there. It’s always gross. I think our son has a wiping problem, and sometimes it looks like our daughter might too, and I’m too ashamed to actually sit down and have a wiping discussion with them, so I just yell at them for being nasty a lot like D.L. Hughley. That’s the correct way to raise a child, right?

So while completing my morning ritual, I have to try and keep myself occupied and my eyes off the floor. I play Draw Something, or come up with a witty Facebook/Twitter status, or just pick my nose a lot. When I’m all done, I hop in the shower.

After a very methodical shower, I open the shower curtain and look for my towel. It used to be, in every single house The Missus and I lived in, we had this whole sort of towel routine. I reuse towels, sometimes up to a week. Call me crazy, but I’m clean when I use them, and after drying off, I flip them up over the shower curtain bar and let them dry. Then, when The Missus takes her shower, she takes it off the bar and puts it on the towel bar next to the shower. Then I take it off the towel bar, dry off, and repeat. Like I said, this is how it used to be.

*cue me throwing up a little.

So, essentially, I’ve used more towels in the last few days than I have in the last two months combined. I can’t touch a towel after I know it’s been touched by one of our kids. Just the thought of using something on my body that has touched theirs…well, it makes me want to bathe in rubbing alcohol. Not that weak sauce 80% rubbing alcohol either. I’m talking 91%. That’s the only rubbing alcohol that comes in my house.

Basically, after all this ranting, I’m wanting to know if this behavior is normal. Seeing as how I’m virtually surrounded by stay at home moms and mommy bloggers, I figured one of you could answer as to whether or not I actually need some sort of extensive therapy, or if this is something that I’ll (God forbid) grow out of. When I addressed the problem with The Missus, she gave me one of those, “I’m late for work and I still can’t believe I let you have sex with me” looks, and walked off saying, “I JUST moved it to the door, Travis. I JUST moved it.”

And in the meantime I’ll be wondering whether or not the conservation of a natural resource that is essential to life is worth me catching the kid cooties from towel transference.

Who can I call to get some of those mood pills?

I posted on Twitter and Facebook yesterday that I was going to be trying a Netti Pot for the first time. I asked for some helpful tips or suggestions, and all I got was this:

So I sorta did.

I’m not going to lie, this is gross. Not really stuff coming out of me gross, but more like, “stuff running down the back of my throat and almost making me vomit” gross.

Watch at your own risk, and have a happy Monday.