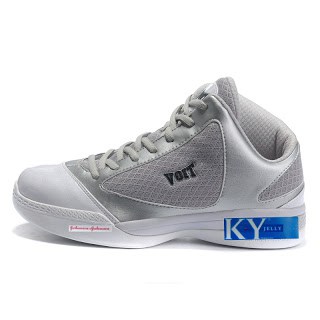 That’s a perfectly normal conversation when I’m around.

I hate to “blame” things on my upbringing. I like to think my parents did a perfectly fine job of raising me and my brothers, and they did it cheap, too. My dad worked, my mom stayed at home, and we went without a lot of extras that others had. One of my favorite examples of this is the basketball shoes I had to get when I was younger.

Nikes, Adidas, Reeboks, Jordans, those were all out of the picture. We didn’t go to places like that to get my basketball shoes. We went to Walmart. My selection consisted of Voits. Voit made the only basketball shoe for Walmart at that time. The design was simple, and it really only had one functional flaw.

The bottom of the shoe was made out of KY Jelly.

I think I’ve told y’all this before, but I could start running, hit full tilt at half court, stop running at the top of the key, and slide into my position at the post. I seriously had it down to an art form. I’d do a little pirouette turn at the end, and then the defender would shove me around because I couldn’t get any traction.

We didn’t go without anything that we needed, and I’m truly not bitter about not having a lot of extra money, but I do think it contributed to some issues that I have currently. For instance, take a look at the budget I would have developed for today had I not given control of the checkbook over to The Missus.

As you can see, I may have a problem with my priorities. So when The Missus came to me and said, “I’d like to sign us up for the Financial Peace class at church, I said, “Eh, why not?”

What she didn’t bother to tell me was who the author of the book and series was.
Let me tell you about the first time I was introduced to anything about Dave Ramsey. I was driving down the road listening to what I call “Preachin’ Radio,” and I tuned in about halfway through a broadcast. I still have no idea what show was playing, but all I heard was a man furiously berating a woman for wanting to file bankruptcy.
“WHY SHOULD YOU JUST BE ABLE TO NOT PAY EVERYONE? WHY? WHY? YOU THINK YOU SHOULD JUST BE ABLE TO GET STUFF AND NOT PAY FOR IT? HOW IS THAT RIGHT?”
I really wanted to add to that, but I didn’t, because now I can say that everything I just said there, I actually heard.
Then the lady, scared to death, barely spoke into the phone, saying, “But I think it’s the only way?”
What followed was another furious tirade of how wrong it was, and why should she get to do that, and she needed to get her budget right, etc.
Needless to say, he failed to make a good first impression on me. 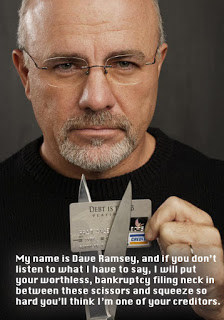 Well, The Missus waited until about 5:29 on Sunday evening to let me know who was the creator of the course. By then, I was committed. So I went to the class, parked my rear end in a seat, and prepared to be pretty much angry the entire time.
I feel like I should mention here that the harshness of Ramsey’s presentations were softened by the fact our pastor’s wife is facilitating the class, and that helps out a lot.
I’m not going to lie, Dave made some pretty cogent points during the video. He also tried to be funny, and sometimes he actually pulled it off. At one point, he said the words, “If you don’t agree with me on that, then you’re wrong.” I briefly considered punching the TV, but it looked as though someone had already done that, and also I didn’t want to embarrass my wife.
Then came the words that got me more riled up than…well, Dave.
“If you’re planning on making any big purchases, put them off until you’ve completed the class.”

I have a few purchases I’m planning on making in the next few weeks. As in two. Two weeks. And now, here’s this guy, telling me not to make them for another nine weeks, which is the length of the class. And if it was just me in there, it wouldn’t be a problem, but he spoke those words while my wife was listening.

You see, I’m a “in one ear and out the other” guy. Always have been, always will be. Think back to the last time we talked. That’s right, you and me. What was our conversation about? Chances are, you might remember. I don’t. I forgot the moment you walked away. Don’t judge me. I have kids.
So now I have to spend the next week on total “convince The Missus to let me have money” mode. It’s not a good mode for me to be in, mostly because it involves her essentially having a third kid, which means that she’ll yell at me more.

All in all, if I give the man a fair shake, I’m sure he’ll “turn my life around.” I’ll pay off all of my debt, start saving with reckless abandon, and soon be a millionaire so I can die in my fifties and let our children fritter away all my self-denial and hard work. But I still plan on hating Dave when I achieve my financial peace, because hey, no one said anything about being at peace with him.

Contrary to popular belief, I was not always this cool.

There was, for instance, the time this picture got snapped.

When you factor in that unfortunate hip placement, the pigeon toes, and the fact that my family couldn’t always afford the “brand name” clothes, it all equaled me getting picked on for most of my childhood. Some, especially today, would call it getting bullied.
When the eighth grade came and went, I hit a growing spell that would eventually leave me around 230 pounds and 5’11”. So when I came in my freshman year, I was a good deal bigger than some kids. But I still had no confidence, and still spent a lot of time getting picked on.
My sophomore year came, and I got a car, a job, a girlfriend, and a new best friend, Kid Funk. The combination of those things sort of brought me around in the confidence department, and that’s when I decided I’d had enough of the bullying, and started taking up for myself.
I can remember a kid who had picked on me for a while hitting me in the arm in the middle of class, and I stood up, wrapped him in a headlock, and wouldn’t let go until the teacher eventually threatened to send me to the office. I can remember a kid throwing a doughnut at my car windshield and me putting the car in park, grabbing the kid around the neck, taking a can of pop from someone, and dousing his head with it. In short, I was sick of it, and I liked putting people in headlocks.
This is not to say I didn’t take advantage of my newly found confidence. I can also remember putting a kid in a trash can – repeatedly – and body slamming a kid onto a table in a classroom. So I wasn’t completely innocent.
But I also remember the day my love affair with the underdog began. The day when I stood up to someone, and walked away feeling better about myself. The day when I decided bullying wasn’t really right for me.
The kid I rescued was really kind of scrawny. He’s still a good family friend to this day, and I know his younger brother reads this blog, but I don’t think he does.
He was, and still is, very smart. He was a little on the dorky side, and small for his age. A late bloomer, if you will.
I rounded a corner in the gymnasium, and I saw this kid pushed up against the wall with a bigger guy than me shoving him backwards and asking him if he wanted to fight. The bully may have been bigger than I was, but he was younger than me. You know the type. Hormones in the chicken and being held back several years had made him a 6’3″, 250 lb. freshman.
It’s no secret on this blog that I hate confrontations. I always have. But on that day, I made a conscious choice to do something about it.
I walked up to the bully, shoved him back, got in his face and said, “Hey man, why don’t you pick on someone your own size? How about me? I’ll fight you. I’ll fight you right now.”
Of course there was a smattering of profanity interwoven into those sentences for effect.
The bully, so eager to fight moments before, lost any courage he previously had and walked off, giving me a not so courteous goodbye.
That’s when the teacher rounded the corner. He’d heard the whole thing.
The teacher and I locked eyes, and there was a very uncomfortable moment of silence where I was absolutely positive he was making up his mind to send to detention, and then he spoke.
“Thank you, Travis. Someone has needed to that for a long time.”
And he walked away.
I was left alone, the justified hero, and to this day, it was one of the finest moments of my life.