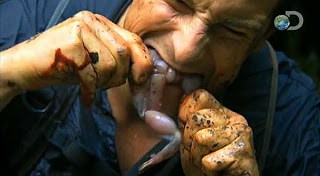 I think it all starts with the first time my dad took me rabbit hunting.

He had gotten me a shotgun for my thirteenth birthday, an old Stevens Savage 12 gauge that I still have to this day. We wanted to get out and test it, and rabbit hunting seemed as good a test as any.

My dad was a paragon of gun safety. He made sure he drilled into my head all the proper procedures for safe and happy hunting, then we went out.

We walked about 25 feet apart so we would have a greater chance of scaring up rabbits. All of the sudden, one appeared in the distance, about thirty feet ahead, and in between us. My dad looked at me and said, “Shoot it son.”

I drew a bead on the rabbit, who was frozen momentarily, deciding which way to run. As I looked down my shaking gun barrel at the supposed doomed creature, it suddenly decided which way it wanted to run: right at us.

Being an ambitious and aspiring new hunter, I did what I thought was the smart thing. I kept a bead on that rabbit as it came closer, closer, and eventually passed in between us, when I realized I was now pointing a loaded gun at my father.

He spoke quietly, patiently, but in volumes.

I got a short and sweet text message back.
“TODAY YOU BECOME A MAN.”
I absolutely love this life of mine.