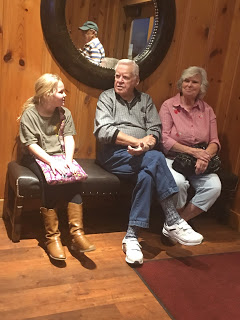 To the Gentleman who talked to my daughter at the Rib Crib:

I know my children are cute, but I often forget how cute until someone else tells me. When my daughter sat down next to you on the bench where patrons wait for tables, I honestly thought she’d get in your way. I was moving in to make sure she didn’t bother you and I quickly realized that wouldn’t be necessary. Instead, you turned to her and spoke to her like she was a grown up, and I don’t know if you noticed, but she loves being talked to like a grown up.

In today’s world, there’s nothing simpler while waiting for a table than to pull out a cell phone and hop on Facebook or Twitter, or send a text to a friend. You showed my daughter that it’s okay to meet new people, to joke with strangers as long as mom and dad are around, or to pass the time without a screen in your face. You held her attention by telling her stories and asking her questions about her favorite subject—her—and she giggled as she had to practically yell her answers back to you.

Because in a world where it’s hard to trust new people, you showed us that there are still those out there who aren’t evil. You complimented her purse and her blond hair. Your wife asked how our youngest child got his red hair, and my wife explained that it came from my side of the family. Truth be told, we adopted our children, and they don’t take anything from our genes. We didn’t want to bother you with that, besides, they aren’t adopted to us, they’re our kids.

Because I heard you tell her that I was a gentleman. All I did was get up when a woman walked in with a walker, and I really hope that anyone would have done the same. It’s nice to be recognized for our actions once in a while though, and I want my daughter to look up to me, and I think what you told her will carry a lot of weight. Sometimes she needs to hear a stranger say her old man is all right.

Because you married a woman just as nice as you are. Because she asked us questions, told us how cute our kids are, and was just an all-around pleasant person to talk to. I’d love to hear the story about how you two met, and how you fell in love. I’m sure that she was attracted to your kindness and to your toughness. I’d like to know how many years you’ve had together. What you’ve been through. How many kids you have. I hope you two have many more years of visiting Rib Crib. 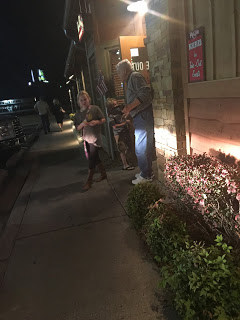 Because, somehow, we left the restaurant at the same time and you asked me, “Where’s my little girl?” And then you stood and held the door open for my daughter and told her goodbye. You showed her you’re a gentleman yourself, and you’re also another person who was kind to her. If you knew the life she came from, you’d know how much that means to her.

Because on the way to the truck, my daughter looked at me and laughed, and talked about how you were from Boston, and how you kept saying your “cah was in the pahking lot.” She said you told her your wife fought in the Civil War, and she thought that was hilarious. She said you were funny, and nice, and all the things young people are looking for in older people.

So thank you, gentleman we met while waiting for a table at Rib Crib. I didn’t get your name, I don’t know where you live, and I wish I had a little more time to talk to you. Maybe one day I’ll see you again and I’ll get to thank you personally. Maybe I won’t. And just in case I don’t, I want the world to know how much your small gesture of kindness meant to me, the father of the little girl whose heart you won.

Hi there. My name is Travis, and I run this blog. We’ve probably met before, you know, at that convention that one time in Querqe.