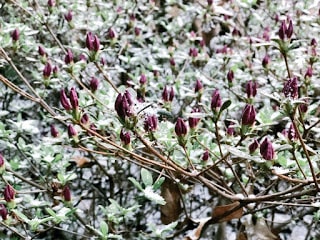 I have a cup of coffee and I’m looking outside my front window at my azaleas…which are covered in snow. Earlier this morning we had an earthquake. My wife is helping my son with his homework, even though he hasn’t been in school all week, and he won’t be there Monday either.

April, blooming flowers, snow, my son actually doing homework, earthquakes…and those aren’t the weirdest thing to happen this past week.

This week I watched through various social media platforms and news outlets as my fellow educators, students, apologists, sympathizers, and according to Mary Fallin, ANTIFA, stormed Oklahoma City and the Capitol to rally for education funding. Awestruck, I saw them fill the Capitol building every day, I saw them spell out messages with their bodies for aerial photographs, and I saw some of the funniest and most grammatically-correct protest signs I’ve ever had the privilege of looking at. 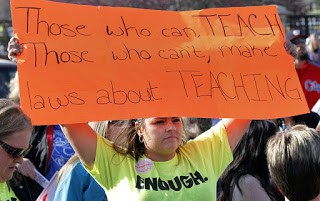 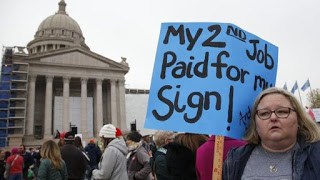 On Monday, I watched our children as my wife joined with her school on the Capitol lawn. On Tuesday, one of our kids had an appointment that my wife and I had to be present for. My school decided at zero hour to not participate in the full-fledged walk out, so for the rest of the week I had to be in class. I wasn’t happy about it.

That said, I’m not unhappy about it anymore. I decided instead to take action. I’ve resigned.

I’ve resigned myself to the thought that most of the people in this state (most of the media included) think that this entire thing is about a pay raise. I’ve spent the whole week telling people I want my raise to go to my classroom, to no avail. In an effort to combat this, I looked at my wife and said, “I’m going to spend all of my raise after taxes on stuff for my room, just to prove a point.” I felt noble. I was proud, standing before my wife having made what I considered to be an incredibly magnanimous gesture. But alas, my beautiful, lovely, and always taciturn wife brought me back down to earth: “Travis, no one cares about you.”

I’m still seeing news stories and Facebook posts about how greedy teachers are. Our own governor thinks we all just want new cars. We can’t win. We’re either greedy, or we stop the fight now and we never cared about the student funding, so we’re selfish. As Bobby Hill says: 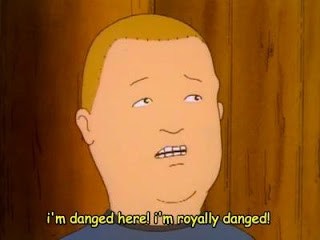 I’ve resigned myself to the knowledge that even with this “generous raise,” Oklahoma will still be near the bottom of the barrel in teacher pay, and because the money from the bills in question is going to general funds, in a couple of years the legislature can appropriate the revenue to whatever they want, leaving already crumbling districts to figure out how to pay for those raises.

I’ve resigned myself to the realization that the leaders of this great state don’t care at all about public education, and their end goal is clearly consolidation at best, and vouchers at worst. This means my tiny school district in Okay, Oklahoma – the school I graduated from and now teach at – might not be long for this world unless something changes. 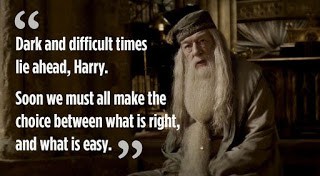 So I’ve resigned. What else could I do?

One of the biggest battles as a teacher in my district is convincing my students they’re capable of being heard. A more perfect example could not have been constructed than in a conversation that took place in my classroom this past week.

Student: “Why aren’t we participating in the teacher walk out?”
Me: “Well…”
Another Student: “We’re just Okay. We’re too small. We can’t make a difference.”
Me: *rage intensifies*

I think that may have been what broke me, and so I just went ahead and resigned again.

I’ve resigned myself to being nicer to those who don’t share my views. And yes, that means starting right now, after the Pharisee simpleton line. Every journey has a beginning, and mine might as well be the space between these two paragraphs. I love you, even if you’re an idiot (okay, now). There are ways to have reasonable discourse on volatile issues, and I have to take responsibility for my part in that. Part of the problem is social media – every issue is polarizing, and if you don’t take a clear stance on an issue, you’re often overlooked. Being overlooked is the worst thing that can happen on Facebook, Twitter, Instagram, or any other digital outlet. Fear of being overlooked can cause people to say emphatic things, even if they don’t entirely believe them.

I won’t be at the Capitol next week. I’ll be in my classroom, helping administer state tests and trying to convince young men and women that yes, they absolutely can make a difference, and yes, their voices can be heard. I’ll be showing them pictures of your signs and videos of your congregations. You can have the stage, and I’ll take my broken classroom podium. Together we’ll scream the same message. “You are powerful. You are capable. You are cared about.”

To the Oklahoma Legislators who are currently supporting us, thank you. We are in your debt, and I personally would love for you to visit my classroom when it’s over. It’s an open invitation. Come and let my students and I thank you personally.

To the ones telling educators to get back in our classrooms and teach: There’s a point in every dystopian novel where the hero(ine) meets those in power. If you could read anything other than bills penned in oil instead of ink, you’d know how they end.