Los Angeles went well. Let me rephrase that. Los Angeles went well for me. Since the last time I’ve written in my journal, I’ve rid this world of 3 different people. Bad people. People who do terrible things to others. They all died within hours of meeting me. I’ve discovered that I don’t have to sleep with them in order for it to happen. A touch will work. Unfortunately, that is how I learned I couldn’t walk into a nightclub in search of someone. There were 2 unnecessary deaths that night, and I’m very lucky that no one has linked it to me.

The search for me continues. My face is now spread across TV stations and newspapers, right alongside the very people I am seeking out. I’ve had to maintain a very low profile. I am a shadow, never staying in one place for long. Like a shadow, I am ever changing, conforming to where the light isn’t, pooling in corners, further darkening the night. My victims never have a chance to say no, they don’t have a chance to scream, to fight, to try and take revenge on me for what I’ve done.

Every night I wrestle with my conscience. I struggle with what I’m doing, and I have to ask myself if I’ve become the enemy, or if I’m still providing this world with a valuable service. There are people in this world right now who have never had the chance to become a victim, and it’s because of me. But do those people see my picture and hate me? Or, upon glimpsing my face, are they given a sense of peace, a measure of understanding, and the ability to support what I’m doing?

The real reason I’m writing tonight is because I seem to have found my nemesis. I’ve found someone who, while not being my equal, certainly seems to be immune to my peculiar ability. His name is Jeremiah, and he is a serial killer in South Dakota. He is employed as a police officer in Garretson, so he has had the perfect cover for many years now. He chooses his victims quietly, and no suspicion has been raised. To this date he has murdered 38 people. I heard about him through a woman I dealt with in Houston and I traveled here hoping that I could make a difference.

It’s been 4 weeks. When the touch didn’t work, I kissed him. When that didn’t work I slept with him. When that didn’t work we started dating. I have lived in a constant state of fear over the last 28 days. I don’t dare fall asleep when I’m at his house. I don’t sit with my back to him. When we are together, I spend most of the time constantly touching him, just to try to end this. I’m scared, but for a multitude of reasons. Being a police officer, he has access to the pictures of wanted persons. It’s only a matter of time before I cross his desk, his bulletin board, his fax machine.

Just now, I’ve made a decision. I’ve never pulled the trigger of a gun, I’ve never plunged a blade into the soft flesh above the heart. I’ve never used poison, and I’ve never closed my hands around a throat with enough pressure to kill. The one thing all of my murders have lacked is evidence linking me to the crime.

That will change tomorrow. Tomorrow I will have literal blood on my hands for the first time.

Am I monster? Or am I a saint of death sent to rid the world of the real monsters?

More importantly, am I coming for you?

photo creditHello there, my name is Rain. I don’t usually tell people my last name, just because this crazy world can do a lot with a person’s full name, but I’ll tell you, because you’ll never believe me. It’s Storm. My full legal name is Rain Anabell Storm. I told you that you wouldn’t believe it. My parents insisted that they called me that because I was born into this world on June 22nd, 1991, during the worst storm in the history of the small town where I live. I think they did it because they were hippies. It doesn’t matter now, they’re dead and I’m currently on a mission, unable to contact a courthouse about possible name change
I should probably start at the beginning. You see, my parents died while taking me home from the hospital. I was 2 days old at the time. It was a car theft gone bad, and my parents were both understandably belligerent with the thief because of their newborn child in the back, so he shot them both in the head. The newspapers from that day say that he then went on with me in the back, and he drove almost 50 miles before the car we were in was struck by a piece of metal thrown from the road by a tire. It came through the windshield, killing him instantly.
Two days later, the doctor who had delivered me died suddenly of a massive heart attack. Then the EMS worker who pulled me from the wrecked car was diagnosed with cancer. He lasted 2 weeks. The pieces of the puzzle were put together surprisingly quickly, and I was quickly sequestered for “the safety of the general public.” I grew up alone. I had no friends. I had no enemies. I was watched from afar, never talked to unless it was on an intercom, and I was studied incessantly by doctors who never stood near me unless there was a wall between us.
My name, I’m afraid, has been my curse. I’m not wanted anywhere.                The way I’ve been treated would have cracked a lot of children. It would have sent them spiraling out of control down a long stairway of madness and into the basement of senility, where deep rooted issues take up permanent refuge in the now clouded home of the mind. However, I’ve come through it okay. I believe I can be useful. There are things I can do that you normal people cannot.                It is those things that I am doing now, even as I write this. You see, I’ve escaped. I’m not as dumb as one might think I am after being cooped up all those years. It gave me time to think, to plot, to notice weaknesses and flaws in the system. Three nights ago I made my nighttime run towards freedom, and I headed south.                You see, while I was incarcerated, I was given access to newspapers, television, the internet, and several other types of news media. There was a man being hunted in Mississippi. He goes by the name Thomas Fields, and he is wanted for 32 counts of murder in the state. He claims the longest list of victims in Mississippi’s history. His face has littered the pages of papers, the screens of televisions, and the monitors of computers every day for 2 years now. And still no one can find him.                I’m in bed with Thomas now. His hand is resting on my naked thigh, and he is snoring softly. Finding him was simple. Apparently I’m an attractive woman. There are many advantages given to the attractive, such as being able to ask questions and get very accurate information, especially out of men.                He’s stopped snoring now, but he’s still breathing. I wonder how long it will take?                You see, I can be useful. I will be useful. I will forever be known as Rain Storm, and with that name comes a curse. I will never know love, and I will never meet anyone I actually want to meet. I won’t have friends. Walking will be my method of travel. It will be a lonely life with absolutely no recognition for my actions, but that’s okay, I don’t want any. I just want the world to be a better place.                Justice, like the weather for which I was named, is seldom wanted. However, it was delivered here tonight, because Thomas is no longer of this world. I have to close this journal now, pack up and head towards Los Angeles.                Am I coming to see you? 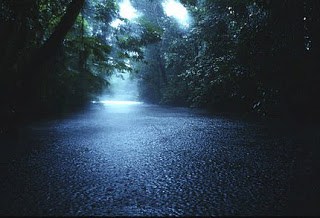