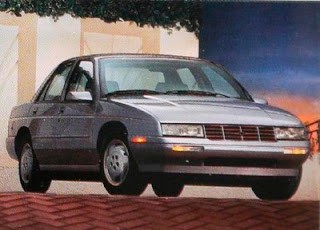 Memoir Monday is where I take a look back through the old memory banks and extract a story, then feel it’s important enough to have its own special place on the blog. I used to have a fancy button, and a place where everyone could link up, but all of that is gone now. If you have your own story you wish to link up with mine, let me know!

***
There was a time when The Missus and I were young and dumb. A time when we circled our wagons of love around the idea of eternal matrimony, but were too young to do anything about it, and too angry with each other the rest of the time. Little did we know, it was our “heyday.”
During this time, we owned a couple of spectacular cars.
Hers, a dark blue, 140 horsepower, V-6 Chevrolet Corsica, circa 1992.

In my corner — and mentioned in such blogs as the one where I let my baby brother drive my car, and also the second time I got slapped, along with stories such as anytime it snowed I did something dumb — a 1997 Ford Escort with a 2.0 liter, 4 cylinder powerplant that cranked out 110 horses, as well as a paint job I liked to call “Silver Surfer.”

Obviously, we both had dads that cared about our safety, as well as not wanting their insurance premiums to go up because of teenage stupidity.
Obviously, we were going to be stupid anyway.
The first day I got my car I tried to see how fast it would go. I got to 100, got scared and braked, but eventually capped it out at 110.
Enough about the cars though. Lets get back to the night The Missus and I had our first race, and the night I performed a movie-esque getaway.
We were both driving home from something, I can’t remember what, when we both started accelerating pretty fast. It was plain to see what was going to happen next: we were going to push those poor little cars to the absolute limits of their paltry performance.
The Missus gunned it.
To be fair, although she “won,” I think it had more to do with her cars engine being bigger than mine, and nothing at all to do with her driving ability, which pales like a Democrat faced with an assault rifle in comparison with my own driving ability.
I put my foot on the pedal of that poor little Escort, and gave it all she had.
What happened next was just an unfortunate turn of events for all involved.
The speed limit on the road we were on was 45 MPH. The speed we had reached when we got to the surprise was about 85 MPH and climbing. All of the sudden, around the corner ahead, we see it.
The Jacket. The Fuzz. Five-Oh. The Blue Steel. The Coppahs. The Donut Squad. The Heat. The Brass. Johnny Law.
A solitary police car on a routine patrol, definitely not expecting two cars rounding on him at twice the legal speed limit.
I’ve taken the liberty of drawing out the scenario.

The large green circle is obviously where The Missus decided to challenge me to what would ultimately be my finest driving moment ever. The yellow sun looking thing is exactly what you think it might be: a convenience store named Sun-Up, or as I took to calling it, “The Promised Land.”
I still maintain the only thing that saved our bacon (heh, cops) was the fact that we had cars behind us which prevented the cop from making his turnaround in an efficient manner.
We both saw him though, and we both had different reactions.
The Missus floored it. She laid into that car like it owed her lunch money. I’m almost positive I heard the RPMs turn 9000 as she roared off to the spot on the map marked “Freedom.”
I, on the other hand, turned crafty.
I waited till I got the rest of the way around the curve, braked, and coasted up into the previous mentioned convenience store, where I immediately unbuckled, jumped out, popped my gas cap off and shoved the nozzle of the fuel pump into my car not unlike the first time…well, never mind.
Then I watched as the unsuspecting policeman roared down the road, lights blazing, siren wailing, driving like mad to catch the two crazy teenagers driving like banshees on his watch.
For a moment, my chivalrous upbringing yelled at me in the voice of my now-passed father.
“WHY DIDN’T YOU TAKE THE TICKET! NOW SHE’S GOING TO GET A TICKET! YOU KNOW SHE BARELY LIKES YOU KNOW, WHAT IS SHE GOING TO FEEL LIKE IF YOU GET HER A TICKET!”
Thus began my careful and methodical destruction of my chivalrous upbringing, which, now that I think about it, might have actually started when I took her to Arby’s on our first date…and asked her to pay.
All tension was allayed though when the cop made the turn shown on the map, figuring it was the only place two cars who suddenly disappeared into the dark could have gone.

I’ve asked The Missus to contribute this morning in the form of a text message.

And thus was the day we became unbreakable partners in both love…and crime.
Until that next prom.

1,462 days have passed since the last time I was there. In that time I’ve almost wrecked a marriage, fixed it, worked at three jobs, left a church, found a new church, gone back to college, and adopted two kids.

I’ve ended a ministry, and started a new one. The former, teenagers. The latter, senior adults.

The last time I was there, Flour on the Roof happened.

The last time I went, we left early on a Monday morning. This time, I’ll be arriving on a Wednesday night. Last time, I was excited. This time…


The place I’m talking about is Falls Creek, Oklahoma.

For those that don’t know, Falls Creek is a youth church camp that is based near Davis, Oklahoma. For those that do know, there’s nothing more to be added. It is a wonderful camp, full of wonderful kids that spend the week battling heat and hormones, and trying to build a closer relationship with God.
In short, this place is amazing.
So why have I waited four years to go back?
Well, the answer to that is a bit complicated. The way I figured it, the Youth Minister that took my place at Okay was a nice enough guy to let me go back with them if I wanted to. Especially after I sorted my personal issues out. However, I couldn’t justify in mind tagging along with him while he was trying to rebuild some of the trusts that I’d broken. To me, it is the equivalent of a pastor ceasing his ministry at a church, then continuing to go to church there. I just didn’t think it was right, and so I didn’t ask.
“Okay, but Travis, aren’t you going back with that same church tonight?”
The short answer is yes. The long answer is that the YM that took my place has left, and the family that replaced him I have known literally my entire life, and also, 99% of the kids that were there when I was there have passed through by now. So I’m taking our newly saved and baptized daughter down for some “precious memories,” as my mother-in-law so contemptuously corrected me a few nights ago.
And when I took Akeeli up to the church the other night to get everything registered, one of the ladies doing the paperwork looked at me and said, “Did you have to do all of this when you were running things?” As she said it, she had a look in her eye that was something akin to a wildebeest cornered by several large and not-yet-vegan African lions.
I looked at her and smiled and said yes, fondly recalling how much I love it. All of the planning, the waiting until the last second on registrations, that one kid that would come running up on Monday morning ten minutes before we left and wanting to go. I. Loved. It.
So why am I nervous?
Falls Creek is almost like a living thing. It’s an entity, it experiences growth and change almost exponentially. And so I’m half afraid that it’s grown out of me. But another real reason is that I’m afraid I’ll get down there and realize that I’ve grown out of it.
I would love to one day return to the Youth Ministry field. That’s a long way away, but I know that if I return to it, I’ll more than likely be taking kids to Falls Creek. I have a heart for teenagers, and I know that FC is the best place for them when it comes to high intensity spiritual conditioning.
But what if I’m over it? What if I get down there, look around, and say, “Wow. This is so different. I can’t stand this.”
It seems silly and trivial, I know. But it is a genuine concern of mine, and the main reason for my nervousness. I’m sure I’ll get down there, take a deep breath, turn my phone off, and realize that FC is still the best place in Oklahoma. And I can’t wait to see my daughter’s face as she experiences the sounds, the sights, the smells, and…her very first icee date, which will be with me.
So I’ll leave work tonight, pick up our daughter, go home and grab our bags, and head out to Falls Creek, where I’ll make…
…The Return. Pray for me.With all respects to Jesus and that fine story, the greatest story ever told actually happened two nights ago and was written by a bunch of teenagers.

Once there was a little girl who needed help. The little girl needed help getting NOS on her turtle so she could go to the store. On the way, the turtle saw a rabbit and they started to race! Then a semi came through and smashed the turtle and the rabbit to death! The rabbit did not die, he came back as a zombie and ate all the turtles that were left. But the turtles were from Iraq and exploded!


There you have it, folks. Rabbits and turtles racing, which is classic, and then zombies? You can’t argue that zombies have taken the literary world by storm. Add some violence with the semi smashing, toss that all together with an Iraq reference, which is topical, and you’ve got the greatest story ever written. Do you NEED to know how the girl eventually got NOS on her turtle? No. No you don’t. All you need to know is that the turtle was looking for victory number two when it came to rabbit/turtle racing, and he was prepared to do anything to get it.

I’m not going to lie, folks. That bit at the end, the twist there? I got the goosebumps. The turtles win again. When will those rabbits learn?