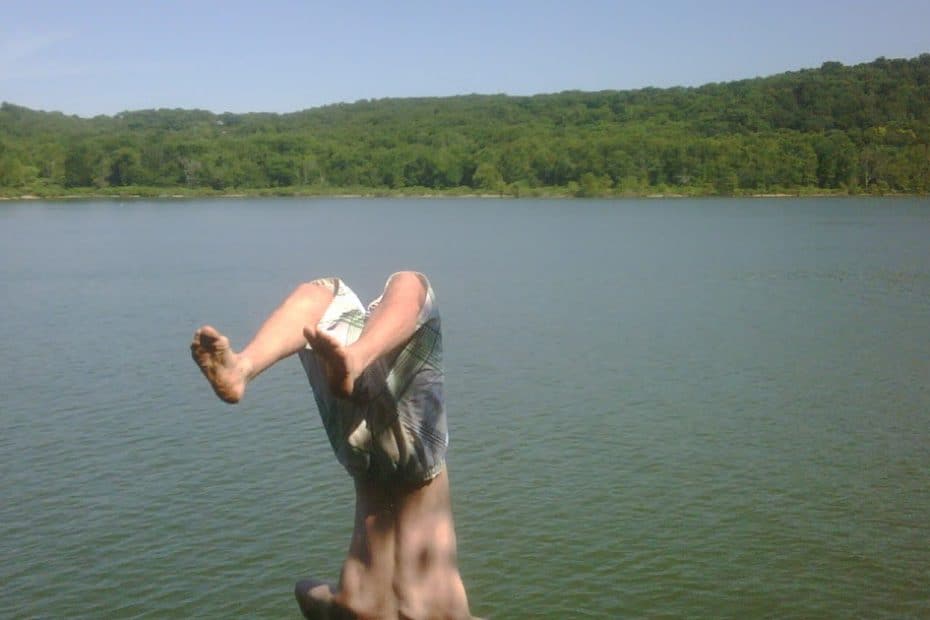 I am a 26 year old. I start a lot of blogs by stating what I am. I do this so you will have appropriate visuals when I blog things. Along with being 26, I am large. Very large. Now, the doctors, they call it obese. I just call it large. Either way. The visual.

Around 2 PM today, I get a text that we’re going cliff diving at lake Tenkiller here around my hometown. I decide to go with. I have a lot of friends that are either in high school, or just got out. No, I don’t buy them booze, and I’m not touching any of them. I used to be the youth minister at the church, and now these kids are my friends. For the most part, I think they feel sorry for me because I don’t have any friends my age with the exception of Kid Funk. So I text back and say that I’m down.
I went out to this place last year after a wee bit of a rainy season, and worked up the nerve and finally jumped in. It was about a 10 foot drop, and I survived. Hell, I even did it again. And another time. Had a blast. Even so, the first time, it took me about 30 minutes to work up the nerve. In the meanwhile, the kids I was with were doing backflips, and swan dives, stuff like that. I don’t think they have any kind of little voice in their heads at all.
So we get out there today, and the water is down. WAY down. What was once a 10 foot drop had doubled in distance. I looked over the edge, and I knew without a doubt that I would not be jumping. Funk that. My survival instinct started screaming about branches and poles hidden beneath the waters, and it also provided me with several graphic displays of what I would look like speared by said objects. At this point is was just me and two of my little brothers and another kid. They start jumpin off of this thing, and just in general start trying new ways to take their own lives. I just sat up there and waited to dial 911. Then about 10 more of em show up. This is when I got the most peer pressure to jump in. So I walk down to the “pansy” section of the rock (maybe about 10 feet drop) and I do it. I jumped.
A couple of things happen when I leave solid ground and jump into mid air. 1. My hands instantly turn sweaty. Thats another story. I almost died. 2. I go down. Quickly. As I am falling, I realized I forgot to ask if anyone had encountered any rocks on this particular “pansy” section. With my constitution sinking as fast as me through the air, I landed. I went straight down about 6 feet onto STONE. This is where I found out that my left leg is longer than my right. It hit first, and since I wasn’t expecting to hit STONE, it shoved my ankle damn near through my leg. Alright. I exaggerate. But it hurt. Still hurts, and I may ice it down. Anyway, I kept the face of an ex high school athlete. I did a modified doggy/frog/breast paddle all the way back to the bank, then climbed up some rocks and sat my fat butt down.
At this point, about 5 others showed up, and I swear, one of em didn’t even stop to look off the edge or anything. He showed up, screamed something, and jumped. Barely had time to take his shirt off. Retarded. He didn’t even LOOK! My youngest brother started saying “Leap before you look.” a lot, and I’m convinced that this motto will be the downfall of our nation. Eventually everyone but me had jumped off the high cliff, even the chicks. I was called every name in the book. Literally, I lived the question, “If everyone was jumpin off a cliff, would you?” I’d like to think that if my mother was out there, after she got done washin our mouths out with soap, would be very proud of me. I played that ankle injury up a lot. By the time we left, I’d half convinced myself it was broke. Hobblin everywhere. I made a decision though. I won’t be going back. Give me a swimming pool without a deep end and some floaties, and I’ll be the happiest man alive. I’ll quote the Bible here, Jesus said “Lo, I am with you always.” That’s real. 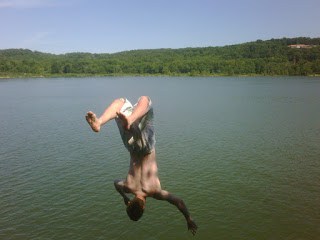 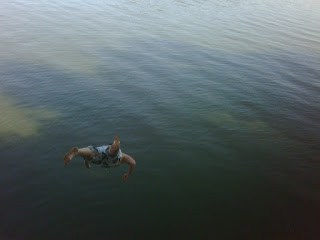 These are pictures of my brothers jumping off. The one thats upside down is The Liar, and the one that is swan diving is The Youngest. Those are their names for now. Both of them are retarded, and had The Groom been there, he’d be retarded too.
As for me, anyone got a nice 4-5 foot pool and some floaties? I’m in. Oh, and 60 SPF sunscreen, because my skin is a pantywaist too.