Oklahoma Knows If Your Kid Is On The Drugs… 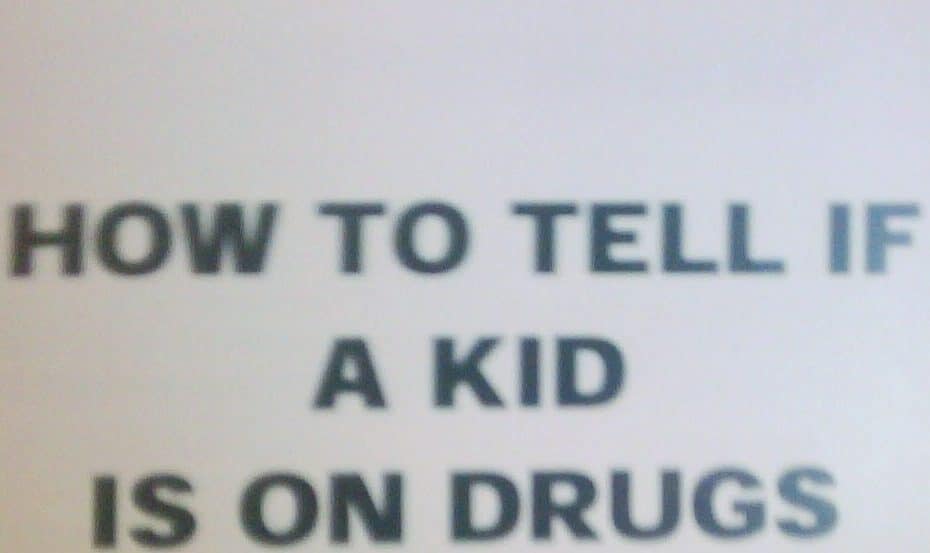 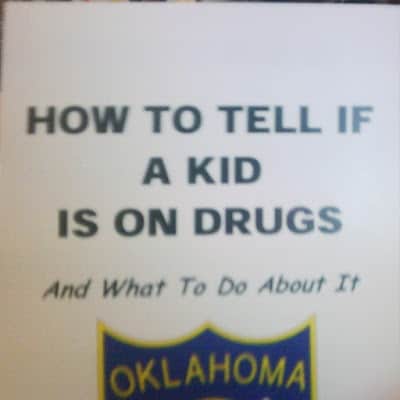 During this post, I’m going to touch on a few things they’ve written inside the pamphlet, and give my own suggestions for helping you determine if your child is on the drugs, and what to do about it if they are. Because if the state of Oklahoma can do it, well, so can I.

First of all, they introduce a “Four L Formula” to help you with your drug finding adventure. It is as follows:

I’d like to give you my “One B Formula” for helping to keep your kids off drugs.

Now, here is a list of some symptoms of drug use that they provide you with. I’ve provided my own possible reasons for these symptoms in italics.

Mood Swings:Mood swings? Really? Let me tell you what causes those mood swings. Hormones. You turn 13, your body says, “Hey, we’d really like to have a bunch of sex right now. Wouldn’t that be fun?” And you say, “Naw, I’m only 13, and I really don’t know how to talk to girls.” You body replies, “Hey. Girly man. Hey. See this down here? Yeah… I’m gonna give you one of these every morning and every time you see a girl in class unless you start doing something about it.” Then you scream and cry and HAVE MOOD SWINGS.


Overly Self-Centered:Hmmm… This only describes EVERY SINGLE TEENAGER I’VE EVER FREAKING MET!


Frequent colds, sore throat, and coughing:So, I’m pretty sure your child has the swine flu. You might want to go get that looked at, instead of telling little Johnny that you did the Devil’s Dandruff one time back in the 80’s, and that’s how you wound up getting mom pregnant, and how he’d have an older brother but you made her sell him so you could get that really kickass Fender guitar that Hendrix used to play that show where you tried pot for the first time.


School Problems:Your kid is probably a dumbass. I hate to be the one to break this to you, but you might consider a tutor, or maybe even a shorter bus.


Tendency to Manipulate:“Hey mom. Dad said it was cool with him if I went to my friends house but I needed to ask you.” Yeah, I manipulated both of them. But my friend didn’t have any White Pony, he just had a BB gun.


Overly Emotional: It’s called a period. Let’s keep it real here, ladies. Shouldn’t you have already had that talk with your daughter? “Listen. For a short time each month, you’re gonna be completely stupid. Just over the top emotional and unreasonable. This isn’t because of drugs, it’s mainly because we HAD to eat that apple back in the Garden of Eden.”


Apathy:“I don’t care. I don’t like myself. Do you have a razor blade? I like to cut my thighs and dwell on the pain. It puts things in perspective for me. The whole world is about pain. Can’t you feel my pain? I like non conformity.” They’re called Emos, and you should refer to my “One B Formula” for these types.


Change in Dress and Friends:Once again, IT’S CALLED HIGH SCHOOL! “Mom, this shirt is so lame.” “ARE YOU ON THE DRUGS, BOY? ARE YOU? I’M CALLING OUR PASTOR! WAIT TILL YOUR FATHER HEARS ABOUT THIS! I WANTED TO KEEP YOUR OLDER BROTHER!!! WAAAAAAAAAHHHHH!!!” Come on, now. Just because little Jeffrey decides he wants vertical stripes instead of horizontal doesn’t mean he’s smokin that crazy stuff. Now if Jeffrey comes home with a 37 year old man named “Beater,” who drives a 87 Tempo with spoiler on the back and is missing most of his teeth, then yeah. Get concerned. And if Susie comes home with Beater, shoot Beater. I’ll help you bury him.

Strained Communication:This is most likely happening because your kid is SO much cooler than you. Weren’t you cooler than your parents? Yeah, I know you listen to “Birthday Sex” in the car with your kid because you want him to know how cool you are. Yes, I know you don’t understand the words, but you googled them and memorized them so you could sing along. No, this doesn’t make you any more cool at all to your kid. In fact, it actually makes you less cool. Buy a motorcycle. Let him drive it. Then you MIGHT be cool. Might.


Dizzy spells, stumbling and shaky hands:Are you letting your kid go get coffee and energy drinks every damn 10 minutes? Did you buy a case of “High Octane Extra Hot Monster Energy Bull Rockstar  Amped May Cause Dizzy Spells And Shaky Hands” energy drinks because you wanted to be “cool?” Yeah. look in the mirror there, wonder parent. Caffeine is a drug. That’s real.


Now look. This is all in good fun, but seriously. Work on the relationship with your kid. That’s how you’re really going to be able to tell if your kid is trippin on the acid. The pamphlet goes on to say this if there is a confirmed drug problem with your kid:

If you are certain your child is using drugs, have a strong confrontation. Wait until he/she is sober. Avoid overreacting, screaming, crying or moralizing. Don’t apologize for searching the room or making the accusation and don’t make deals or try to bribe the child to stop using drugs or alcohol. Be specific in your accusations and present any proof that you have. Then be willing to enforce curfews, ground the young person, and withdraw privileges. Restrict the young persons access to cash. Parents should back each other up on all disciplinary issues. Never let the young person manipulate the situation by playing one parent against the other.”


I agree with all of this except screaming at your kid. I say scream at them. But they left out one thing.

Are you hitting your drugged up child?

You should be. That’s real.

I don’t mean punching them in the face. Although, a good throat chop will solve most of your problems. If you do it right, they can’t even cry afterwards. They’ll just sit there and choke. If they stop breathing, you might call an ambulance, but only after they confirm through various hand signals that they will never do drugs again. You might even make them sign something. After they agree to it, dial the 9 and then the 1, then  make it very clear how you have the power to push that other 1, and that if they aren’t going to cooperate, you can make another child that looks just like them.

But seriously. Spanking is way overlooked. I got spanked up until I was 16, and you know something? I DESERVED EVERY ONE OF THEM I GOT. Will my children get spanked? Hell yes. Will they deserve it? Hey, I’m their father. Of course they’ll deserve it. It’s something to think about.

Even though I shouldn’t have to say this after all the reading you’ve done on this blog, I’m gonna say it anyway.


I love you all, and have a happy Sunday.